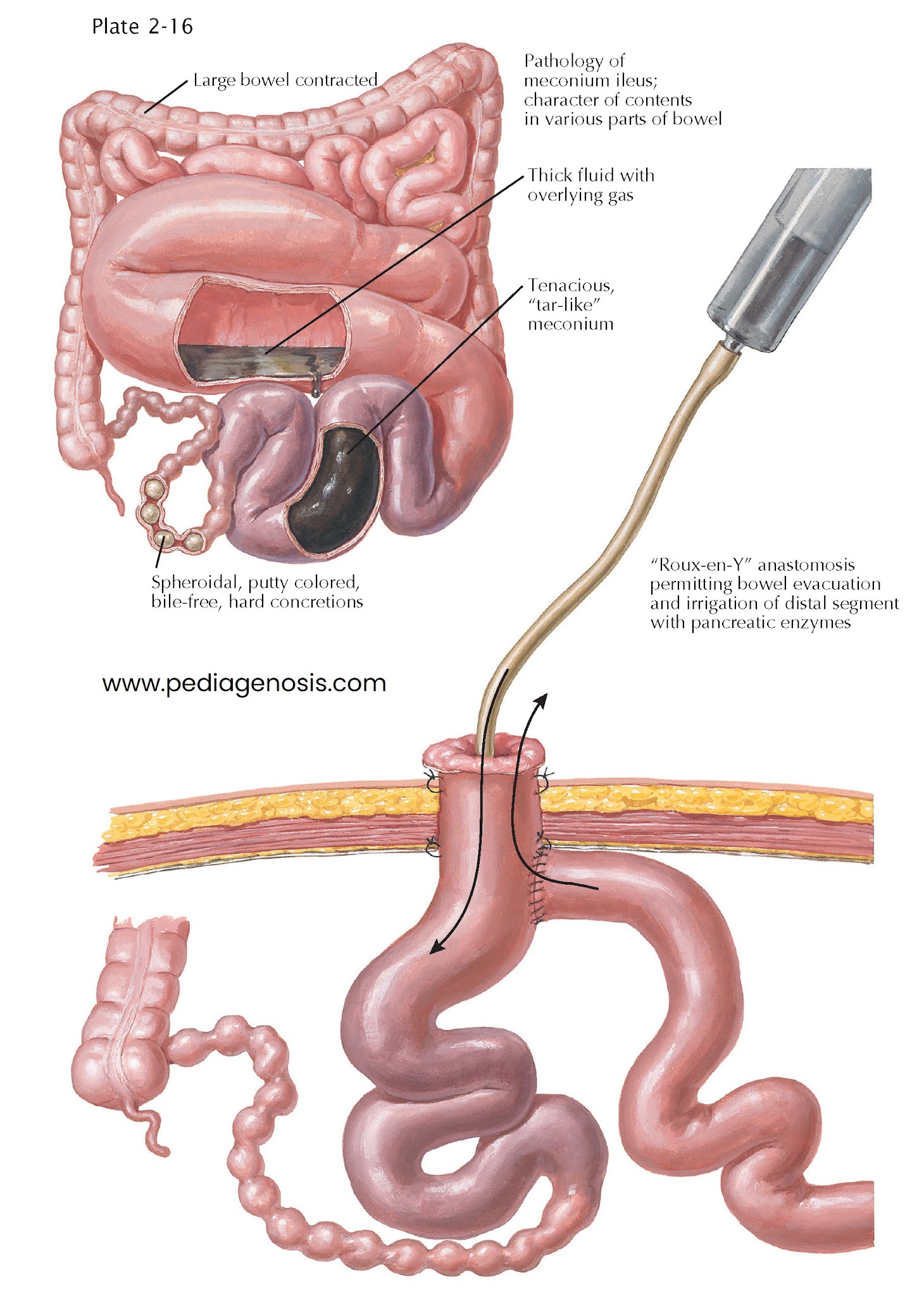 The condition known as meconium ileus develops exclusively in infants born with cystic fibrosis, which is a lethal autosomal recessive disorder caused by mutation of the cystic fibrosis transmembrane conductance regulator (CFTR) protein. This mutation primarily interferes with chloride transport in various acinar structures of the intestinal, bronchial, salivary, and sweat glands, as well as those of the pancreas. Pancreatic damage can occur in utero; 85% to 90% of these patients develop severe pancreatic insufficiency. Subsequently, the meconium becomes thick and tenacious, adhering to the intestinal mucosa and causing impaction in the ileum and intestinal obstruction.

Meconium ileus can cause complete obstruction, with an empty, collapsed segment distally and a dilated segment proximally. The ileum frequently resembles a strand of beads, as the bowel wall conforms to the contour of the aggregations of meconium, which is gray in color and of a dried, puttylike consistency. Just proximal to the occlusion, the bowel is slightly larger in caliber, and the meconium sticking to the wall is less firm but still so viscous as to prevent peristaltic propulsion. It is here still gray-green to green-black, and it contains so little fluid that it leaves no stain when held in the hand. Meconium ileus has typical radiographic findings. Some of the loops seem moderately enlarged, some are enormously ballooned, others appear normal, and some are even smaller than normal. This is in marked contrast to intestinal obstruction from atresia, stenosis, or aganglionic megacolon, where all the loops are likely to be extended with gas to the same extent. The inspissated meconium is seen on the x-ray film as a radiopaque mass, with a mottled appearance due to air bubbles that have been forced into it. It is important to remember, however, that inspissated meconium may also be visualized in aganglionic megacolon (see Plate 3-30) and that both conditions, meconium ileus and aganglionic megacolon, may exist without any evidence of fecal shadows on x-ray examination. Flecks of calcium, either scattered throughout the abdomen or attached to the bowel wall, are diagnostic of meconium peritonitis caused by rupture of the intestine in utero.

The management of meconium ileus depends on the degree of obstruction and the presence of complications. Patients with uncomplicated meconium ileus can be treated nonoperatively by methods that help disimpact the inspissated mucus. In this approach, dilute water-soluble contrast or N-acetylcysteine (Mucomyst) can be infused transanally via catheter into the dilated portion of the ileum. This procedure should be performed by an experienced team, and the use of fluoroscopy is recommended. These agents help dissolve the impacted meconium by absorbing fluid from the bowel wall into the intestinal lumen; therefore, these infants are at risk of fluid and electrolyte abnormalities, and expectant and adequate resuscitation is mandatory. This approach can be followed for several days provided no complications occur; if there is no success, surgical intervention should be considered. Operative irrigation can be attempted using the same agents delivered through a purse-string suture. Alternatively, the distended terminal ileum should be resected with the meconium pellets flushed from the distal small bowel. An end ileostomy is created, with the distal bowel brought up as a mucous fistula or sewn to the side of the ileum. Reanastomosis can be carried out at a later time after appropriate deflation of the dilated proximal bowel has occurred and pancreatic enzymes have been instituted. Distal intestinal obstructive syndrome is a similar phenomenon that occurs later in life and is more commonly seen in cystic fibrosis patients with a history of meconium ileus as an infant.