Recurrent or chronic adnexal infections may result in a cystic dilation of the fallopian tube (hydrosalpinx), which may present as an adnexal mass. The purulent contents of the pyosalpinx may thicken and gradually be replaced by granulation tissue, which is sometimes calciﬁed and, in rare instances, even ossiﬁed. More often, however, the solid constituents of the tubal contents are gradually liqueﬁed and changed into a serous or serosanguineous ﬂuid, thus transforming the pyosalpinx into a hydrosalpinx. 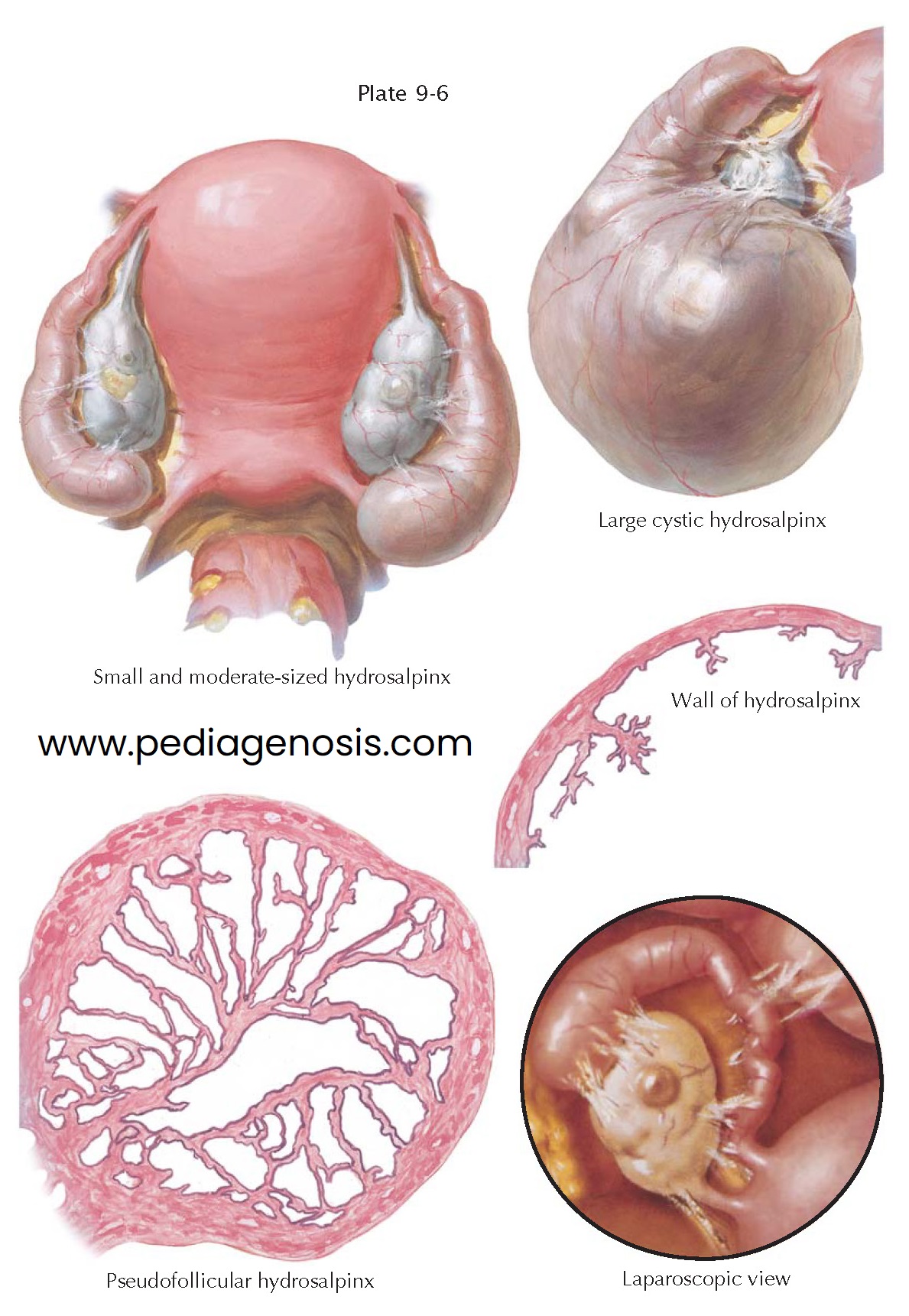 After resorption of the inﬂammatory inﬁltrate and the degenerated tissue, the tubal wall becomes thin and poor in muscle ﬁbers and assumes a translucent appear- ance. The size of the hydrosalpinx can vary from twice that of a normal tube to that of a large sausagelike creation 3 cm or more in diameter, which, in form, has completely lost all resemblance to the tube from which it derived. The ﬁmbriae in such a hydrosalpinx may have completely disappeared.

In cross sections, the mucosal folds are low and separated from each other by ﬂat areas. Sometimes the folds are completely effaced and are indicated only by ﬂat ridges or are not recognizable at all.

This form of hydrosalpinx (sometimes referred to as hydrosalpinx simplex) may develop over a period of many years without causing any symptoms that would prompt a woman to seek medical attention. This is understandable, because microscopically this thin-walled cavity may appear to have lost all evidence of the originally infectious and inﬂammatory process. In other instances, foci of a chronic inﬂammation can be found in the tubal wall. As a rule, however, microorganisms cannot be cultured from the cystic ﬂuid.

The same holds true for the pseudofollicular hydrosalpinx, which differs from the simplex type only in its cross section. Here the tubal folds may have been preserved to a certain extent but have grown together at their opposing ridges and branches, forming a labyrinth of hollow spaces. This pseudofollicular hydrosalpinx is said to be most often the result of gonorrheal infection but may also be encountered in chronic salpingitis of other origin.

The occlusion of the tube on its uterine end is not always tight. In rare cases, the tubal lumen is blocked in this section only by valvelike folds and may open if the hydrosalpinx becomes distended. This condition, which is characterized by the periodic escape of tubal contents and accompanied by colicky pain, is called “hydrops tubae proﬂuens.”

In hydrosalpinx, the peritubal adhesions are often few and ﬁlmy, and hence torsion of an oviduct is no rare occurrence. Extravasation of blood into the twisted tube changes the hydrosalpinx into a hematosalpinx.

The diagnosis of hydrosalpinx, and incidentally also of pyosalpinx, is not always an easy one. They may be mistaken, particularly if they are very large, for ovarian cysts, although the latter are more movable. Laboratory pregnancy tests may prove useful in the differentiation from ectopic pregnancy. From a cooperative patient, one will always obtain a history of a past acute episode of pelvic infection, which, with the ﬁndings of the physical examination, will lead to the correct diagnosis. Although a patient may report a history of a past acute episode, the history of pelvic infection is usually not volunteered.

Surgical therapy for a hydrosalpinx (salpingectomy or salpingo-oöphorectomy) is curative. Neosalpingostomy may be considered when fertility is to be maintained, but the success of this procedure is inversely proportional to the size of the hydrosalpinx and is generally less than 15%. More often, in vitro fertilization, bypassing the damaged tubes, is recommended, though the success rates are lower in these patients. Prior to in vitro fertilization, removal of the affected hy rosalpinx improves implantation and pregnancy rates.