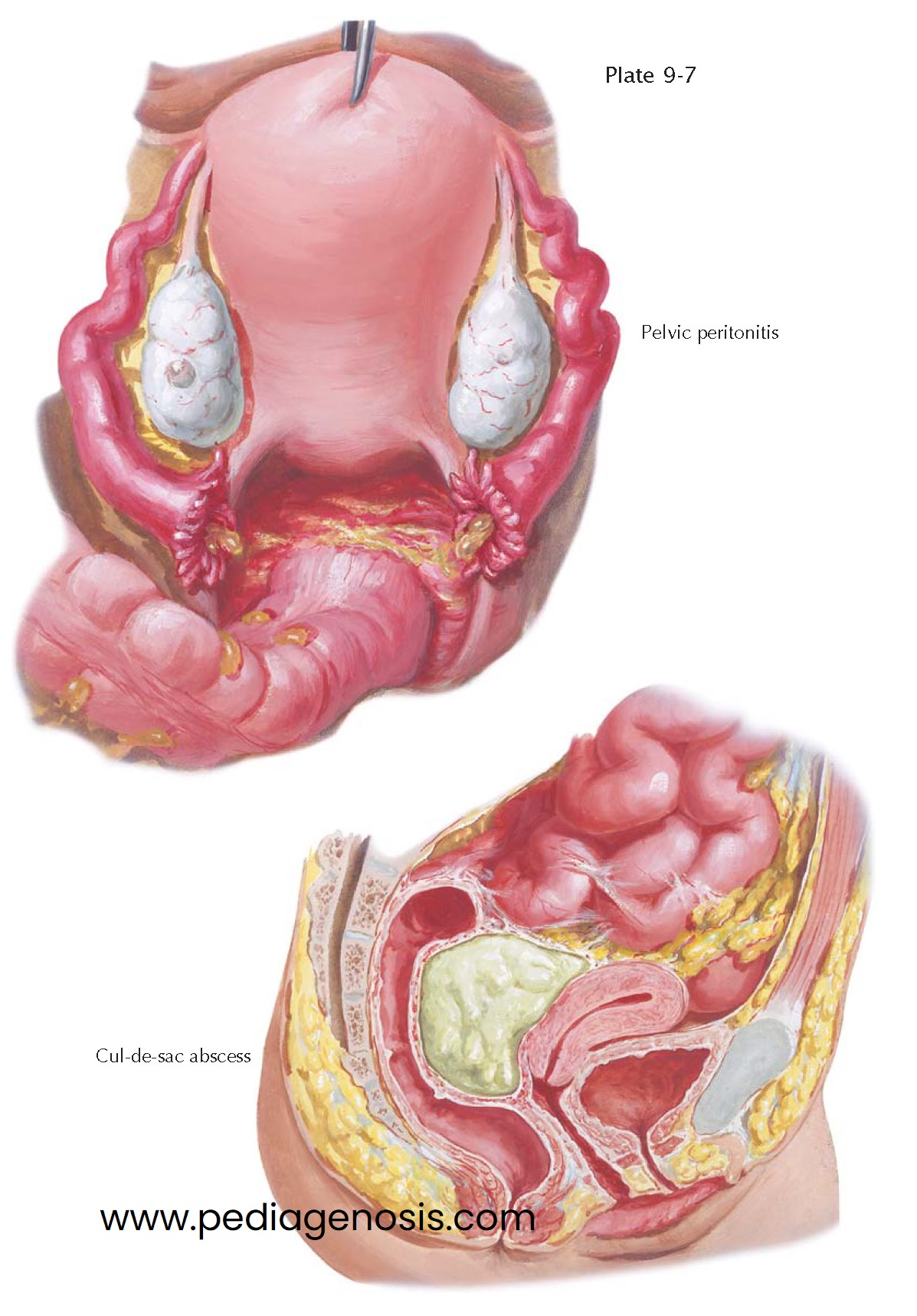 As long as the ampullary ostium is patent, the purulent contents of the infected tube escape into the peritoneal cavity, causing a peritonitis, which is at ﬁrst diffuse but, in favorable cases, may become conﬁned to the pelvic cavity. Even when the tubes have become blocked, widespread peritonitis may result from spread of perisalpingitis, tubal lymphangitis, or rupture of a tube. Whereas acute parametritis often leads to septicemia, if the loose or liqueﬁed infected thrombi enter the general circulation, acute salpingitis causes a diffuse or circumscribed pelvic peritonitis. Thus, pelvic inﬂammatory disease (PID) is a serious, diffuse, frequently multiorganism infection of the pelvic organs that results in signiﬁcant morbidity.

The severity and extent of the peritonitis depend on the type of pathogenic bacteria, their virulence, the resistance of the patient, and the efﬁciency of treatment. In roughly one-third of cases, the causative organism is Neisseria gonorrhoeae alone. One-third of cases involve infection with N. gonorrhoeae and additional “mixed” infections with other organisms. The last third of infections are due to mixed aerobic and anaerobic bacteria, including respiratory pathogens such as Haemophilus inﬂuenzae, Streptococcus pneumoniae, and Streptococcus pyogenes found in up to 5% of patients. Polymicrobial infections are present in more than 40% of patients with laparoscopically proven salpingitis, with one study reporting an average of 6.8 bacterial types per patient. Only approximately 15% of women with cervical N. gonorrhoeae infections develop acute pelvic infections. Orgasmic uterine contractions, disruption of normally protective cervical mucus at ovulation or during menses, the attachment of N. gonorrhoeae to sperm or direct inoculation at the time of surgical procedures, like placement of an intrauterine device (IUD), may provide transportation to the upper genital tract. Chlamydia is involved in roughly 20% of patients, with this rate rising to roughly 40% among hospitalized patients. Infection of the upper genital tract by Chlamydia often causes an indolent course of salpingitis with more insidious symptoms.

During upper genital tract infections, purulent material accumulates in the cul-de-sac and may become sealed off from the rest of the peritoneal cavity by adhesions between the pelvic organs, omentum, and intestinal loops. Frequently, the sigmoid and the mesosigmoid become adherent to the uterine fundus and the upper border of the broad ligament, forming a protective roof over the pocket of pus. This pelvioperitonitic abscess, commonly called a tuboovarian abscess, is a protective mechanism to localize and contain the infectious process.

A tuboovarian abscess can be surgically opened and drained via the anterior abdominal wall, by laparotomy or laparoscopy, or by a transvaginal route. In some unique situations, interventional radiologists may drain a tuboovarian abscess by inserting an imaging guided catheter into the affected area. Pelvic peritonitis very seldom heals without leaving adhesions between the pelvic organs, the sigmoid, and the omentum. Very often, the uterus is pulled backward into a permanent state of retroﬂexion by adhesions with the rectum and the pelvic wall. This ﬁxed uterine retroﬂexion can cause troublesome symptoms such as backache, constipation, and pain during defecation and copulation. Surgical extirpation may be the only option when symptoms are signiﬁcant and unresponsive to other therapies.

Roughly one in four women with acute PID experiences medical sequelae. Pelvic inﬂammatory disease leads to tubal factor infertility, ectopic pregnancy, and chronic abdominal pain in a high percentage of patients. The risk of infertility roughly doubles with each subsequent episode, resulting in a 40% rate of infertility after only three episodes. One single episode of severe PID can cause infertility. Women with documented salpingitis have a fourfold increase in their rate of ectopic pregnancy, and 5% to 15% of women require surgery because of damage caused by pelvic inﬂammatory disease. Peritoneal involvement may spread to include perihepatitis (Fitz-Hugh-Curtis syndrome). Rupture of a tuboovarian abscess, with subsequent septic shock, may be life-threatening.