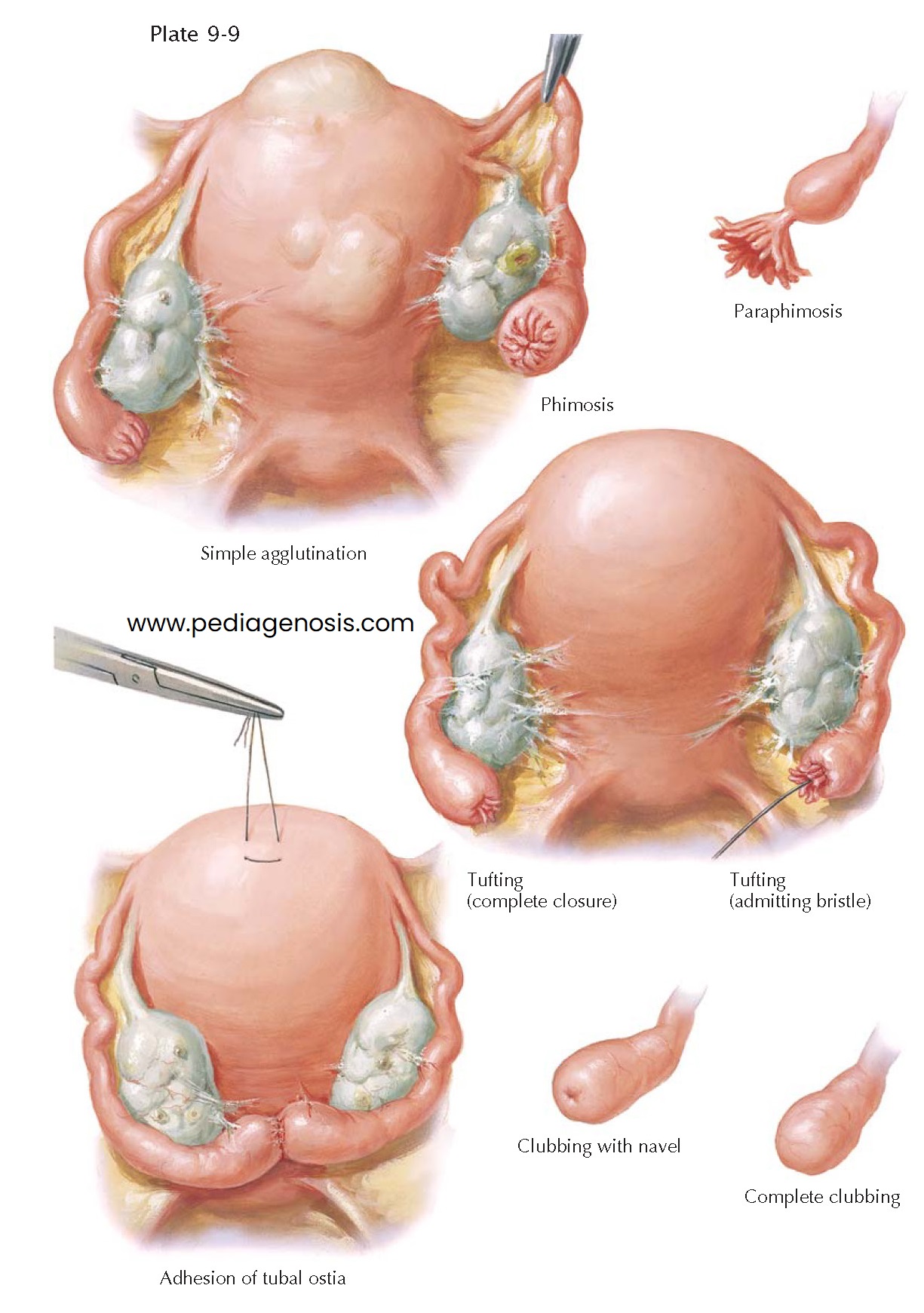 Recurrent or chronic adnexal infections may result in a cystic dilation of the fallopian tube (hydrosalpinx), which may present as an adnexal mass. The chronically inﬂamed tube, with the exception of the tuberculous tube, is usually closed. It often remains open at its ampullary end, but, owing to the changes in the tubal wall, it only rarely allows the fertilization of the ovum and its transportation into the uterus. Forty percent of female infertility is the result of tubal damage, including the most severe form, hydrosalpinx. Most hydrosalpinx are sterile and are the inactive end stage of the disease. The occlusion of the tube may be located at the uterotubal junction, the isthmic section, or the ﬁmbrial end of the tube. It may be restricted to a closely limited area or may involve large portions of the tube, especially in the narrow isthmic section. If only the inter-stitial portion is closed, or there is obliteration of the isthmic portion, the outer aspect of the tube may remain unchanged. Only rarely is there a nodular enlargement of the isthmic section of tube.

Following inﬂammation, the shape of the ampullary end shows many variations. The ampulla may still exhibit a small tuft of short fringes, or it may be clubbed, without any traces of ﬁmbriae. Sometimes a central, shallow dimple may indicate the original tubal opening. In other cases, the inverted ﬁmbriae and the tubal ostium are still recognizable. This latter condition has been called “phimosis” of the tube. Another, less frequent condition, “paraphimosis,” consists of a tight constriction of the tube, just medial to its ﬁmbriated end.

Sometimes one tube may be completely closed, whereas the tube on the other side still permits the introduction of a ﬁne probe. As a rule, the tubes remain separated, but in rare cases they may adhere to each other and to the posterior wall of the uterus.

Various attempts to explain the mechanism of tubal closure at the ﬁmbriated end have remained unsuccessful.

The site of tubal obstruction can be determined by laparoscopy or by hysterosalpingography. Sometimes the correct interpretation of hysterosalpingograms requires great experience, and the procedure is not harmless if a nonabsorbable contrast medium such as Lipiodol is used. The latter is usually retained in the closed tube for years, becomes inspissated and causes a foreign-body reaction, which may have a deleterious effect on the hitherto patent portion of the tube. Most contrast materials in use now are water soluble, reduc- ing this risk. A water-soluble contrast medium also provides better visualization of the tubal mucosal folds than does an oil-based medium. It is important to be able to evaluate the appearance of the intratubal architecture to determine the extent of damage to the oviduct. If a hydrosalpinx is seen at hysterosalpingography, an antibiotic such as doxycycline should be continued for 1 week following the procedure. The diagnosis of the site of tubal obstruction is naturally simpler by means of the laparoscopy.

Surgical therapy (salpingectomy or salpingo- oophorectomy) is curative. Neosalpingostomy may be considered when fertility is to be maintained, but the success of this procedure is inversely proportional to the size of the hydrosalpinx and is generally less than 15%. More often, in vitro fertilization, bypassing the damaged tubes, is recommended, though the success rates are lower in these patients. If the hydrosalpinx is large and clearly visible on ultrasound, it is preferable to perform laparoscopic salpingectomy prior to in vitro fertilization.

When associated pelvic adhesions are symptomatic, they may be lysed during laparoscopy or laparotomy. The success of this is often variable or disappointing either because of reformation after the trauma of surgery or incorrect attribution of symptom causality to the adhesions.