Mesonephric cysts can develop from the permanent portion of the mesonephron, which is the paraovarian or epoöphoron, or from the inconstant residue of the wolfﬁan (Gartner) duct. The former, called paraovarian or epoöphoron cysts, may be small and may represent simple retention cysts; some, however, are true blastomas, which grow continuously and may ﬁnally attain an enormous size. As a rule, even the giant cysts remain unilocular. 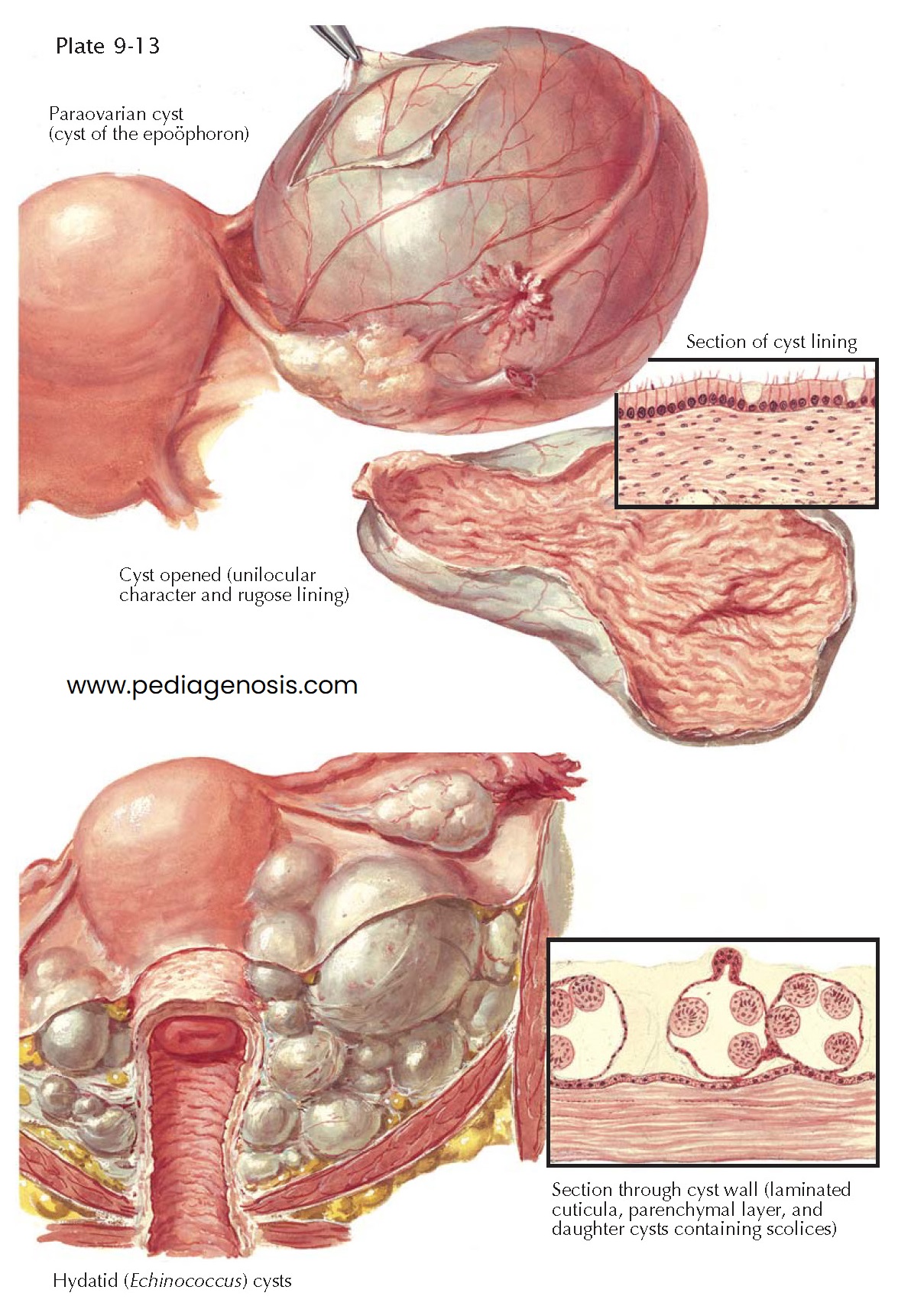 Owing to the intraligamentary location of the epoöphoron, the paraovarian cysts are always intraligamentary and are covered by the distended peritoneum of the broad ligament. Exceptionally, the cyst is ﬁxed to its surroundings by dense inﬂammatory adhesions or, instead of expanding upward toward the peritoneal cavity, it may grow downward toward the pelvic ﬂoor or into the mesosigmoid.

The tube and the ovary are displaced and stretched out by the cyst. As a rule, the tube encircles the tumor by running around it from the anterior to the posterior surface of the cyst, where it reaches the ﬂattened and elongated ovary with its ﬁmbriated end.

Paraovarian cysts do not have true pedicles, but if they continue to project into the peritoneal cavity, some kind of pedicle develops; this consists of the tube, the proper ovarian ligament, and the suspensory ligaments. Torsion of this pedicle is by no means rare.

The wall of the epoöphoron cyst is usually thin and ﬂaccid. It consists of a dense, lamellated outer and a loose, reticular inner layer of connective tissue and an innermost single-layered epithelial lining. The connective tissue is intermingled with elastic ﬁbers and sparse smooth muscle ﬁbers. The epithelium is low in some places and cylindrical and ciliated in others. In most cases the inner surface is smooth but often becomes corrugated when the cyst is opened and emptied. The rugose appearance of the cyst wall is due to the retractability of its elastic constituents. Sometimes the inner surface of the cyst is puckered, and in isolated cases even studded with papillary, cauliﬂower-like excrescences. As a rule, paraovarian cysts are benign. Malignant degeneration is exceedingly rare.

In all cases of cysts situated in the broad ligament or in the deeper pelvic connective tissue, the possibility of Echinococcus cysts should be taken into consideration. Echinococcus cysts represent a rare hydatid form of Taenia echinococcus, which is a tapeworm living in the intestine of various animals, notably dogs and sheep. The disease is sporadic in the United States but common in Australia, Iceland, Argentina, and some parts of Germany and Russia. Having arrived in the human intestine, the oncospheres lose their sheaths, pierce the intestinal wall with their hooklets, and pen- etrate into the bloodstream either directly or by way of the lymphatics. They settle most commonly in the liver and lungs but occasionally also in the pelvic connective tissue, where the oncospheres develop into cherry-to head-sized cysts which are ﬁlled with clear ﬂuid of low speciﬁc gravity (1.010 to 1.015). The wall of the cyst consists of an outer lamellar cuticle and an inner granular parenchymal layer. From the latter, daughter cysts develop, as well as budlike structures, the scolices, each provided with a crown of hooklets and two lateral suckers.

In the pelvic connective tissue, the cysts are usually multiple because of an exogenous proliferation of a single original cyst or because of a primary infection with multiple oncospheres. A membrane of inﬂammatory connective tissue containing lymphocytes and leukocytes, particularly numerous eosinophils, surrounds the cysts.

The treatment is surgical. Only complete removal of all cysts prevents recurrence. Opening the cysts and spilling their contents must be avoided.