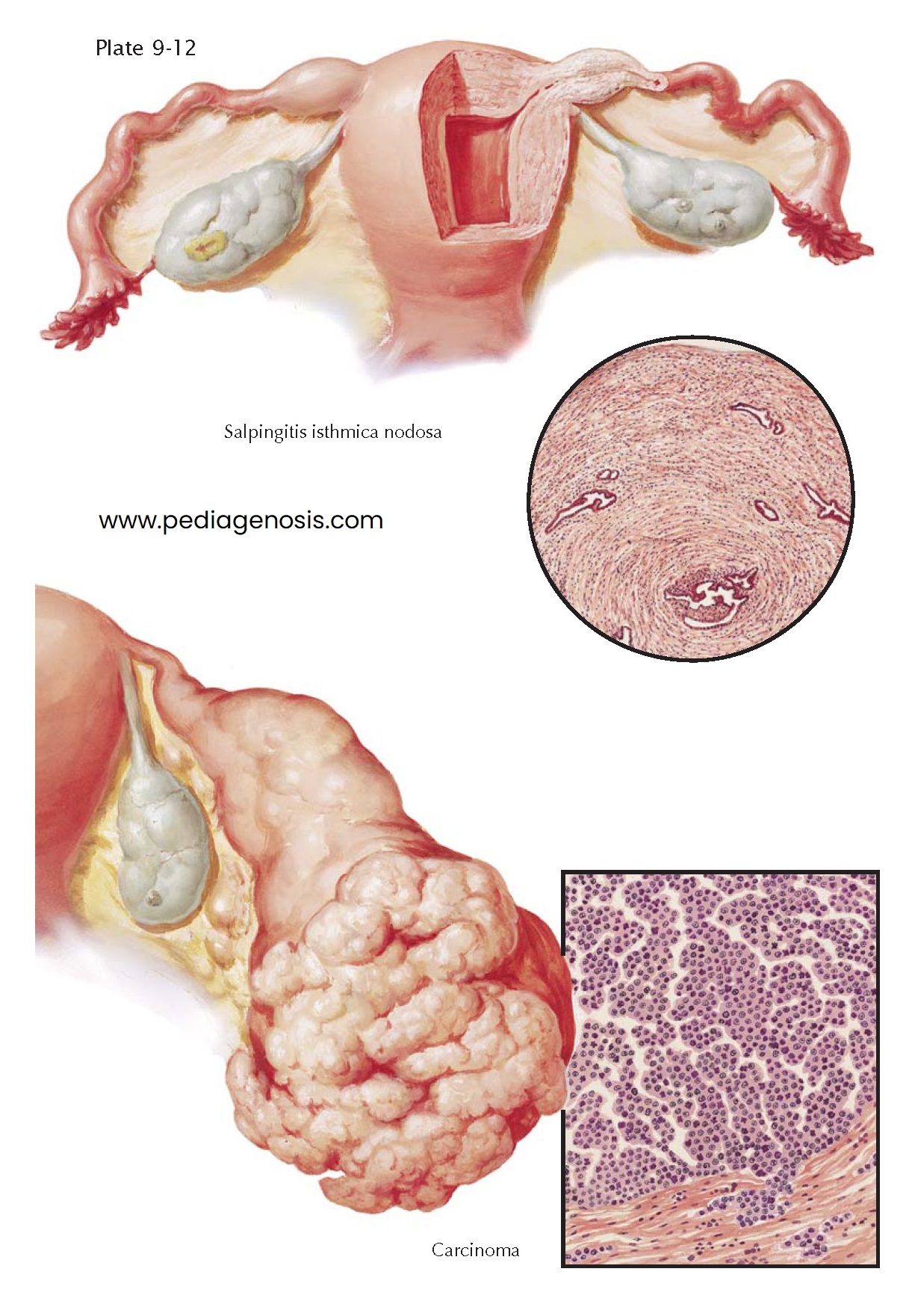 The nodular enlargement of the innermost isthmic portion of the tube, called salpingitis isthmica nodosa, once was the subject of lively discussion among gynecologists and pathologists with regard to its origin or pathogenesis. It consists of glandular ramiﬁed projections of the mucosa into the thickened tubal wall. Most authors assume that nodular isthmic salpingitis is of inﬂammatory origin. However, it may be, in some or even in the majority of cases, the result of a noninﬂammatory endosalpingosis, a condition closely related in its nature to uterine adenomyosis or endometriosis. (Approximately two-thirds of women with adenomyosis have coexistent pelvic pathology, including salpingitis isthmica nodosa.) Some studies indicate that salpingitis isthmica nodosa can be documented histologically in more than 50% of patients with ectopic pregnancies. The diagnosis is best made radiographically at hystero-salpingography, where the characteristic ﬁnding consists of multiple nodular diverticular spaces in close approximation to the true tubal lumen. Visualization of nodular thickening of the tubes on laparoscopy also suggests the diagnosis.

Neoplasms of the uterine tubes are much rarer than those of the ovaries or the uterus. They may be epithe- lial in nature such as papillomas, adenomas, carcinomas, and chorioepitheliomas, or they may be mesenchymal tumors such as ﬁbromas, myomas, lipomas, chondromas, osteomas, and angiomas. Mixed tumors may, in rare cases, also arise from the tubal walls. Endosalpingosis occupies an intermediary position between inﬂammatory and neoplastic diseases.

Foci of endometrial tissue are commonly found in the endosalpinx and are particularly frequent in the interstitial portion of the tube. In the interstitial and the adjoining isthmic region, they may produce a nodular thickening of the tube similar to that caused by chronic inﬂammatory irritation. In both cases, ramiﬁed glandular projections are the most conspicuous constituents of the nodules. However, the presence of cytogenic stroma characterizes the endometriotic nodules, whereas the absence of cytogenic stroma and the presence of scar tissue and round cell inﬁltration indicate the inﬂammatory origin of nodular isthmic salpingitis. The most important tubal neoplasms are carcinomas, which may originate in the tubal mucosa or may be secondary to a primary carcinoma of the ovary, the uterus, or the gastrointestinal tract. In primary tubal carcinoma, the tube forms an elastic or ﬁrm, sausage- or pear-shaped tumor, which is usually adherent to its surroundings and ﬁlled with papillomatous, cauliﬂower-like or villous, friable masses of grayish-red or grayish-white neoplastic tissue. The tumor secretes a clear or turbid ﬂuid, which may occasionally escape from the uterus, causing a rather conspicuous watery discharge. The cells of the tumor are arranged in single or multiple layers, and mitoses are frequent. Squamous cell carcinoma has, in rare cases, also been found in the tubes.

Extension of the carcinoma takes place via the lymph or bloodstream, along the peritoneal surface, or by contiguity. The ovaries and the uterus are frequently involved in the disease, and invasion of the iliac and lumbar lymph nodes is common.

The symptoms are minimal in the initial stage of the disease. Burning or darting pains in the lower abdomen, hemorrhages, and clear or turbid, serous or serosanguineous discharge may be present. Approximately 50% of patients with fallopian tube cancer present with vaginal bleeding. Ascites and progressive emaciation occur only in very advanced stages. Abnormal cervical cytology is occasionally present, with a reported range of 10% to 40%.

Owing to a lack of frank symptoms and signs, the diagnosis is difﬁcult and in most cases is only tentative. Because the disease is rarely recognized at an early stage, the prognosis is poor, and permanent cures by operation and radiation are rare exceptions.

Retrospective studies have shown that 17% of women with tubal carcinoma harbor germline BRCA mutations. This suggests that the BRCA1/BRCA2 mutations have a role in fallopian tube tumorigenesis.