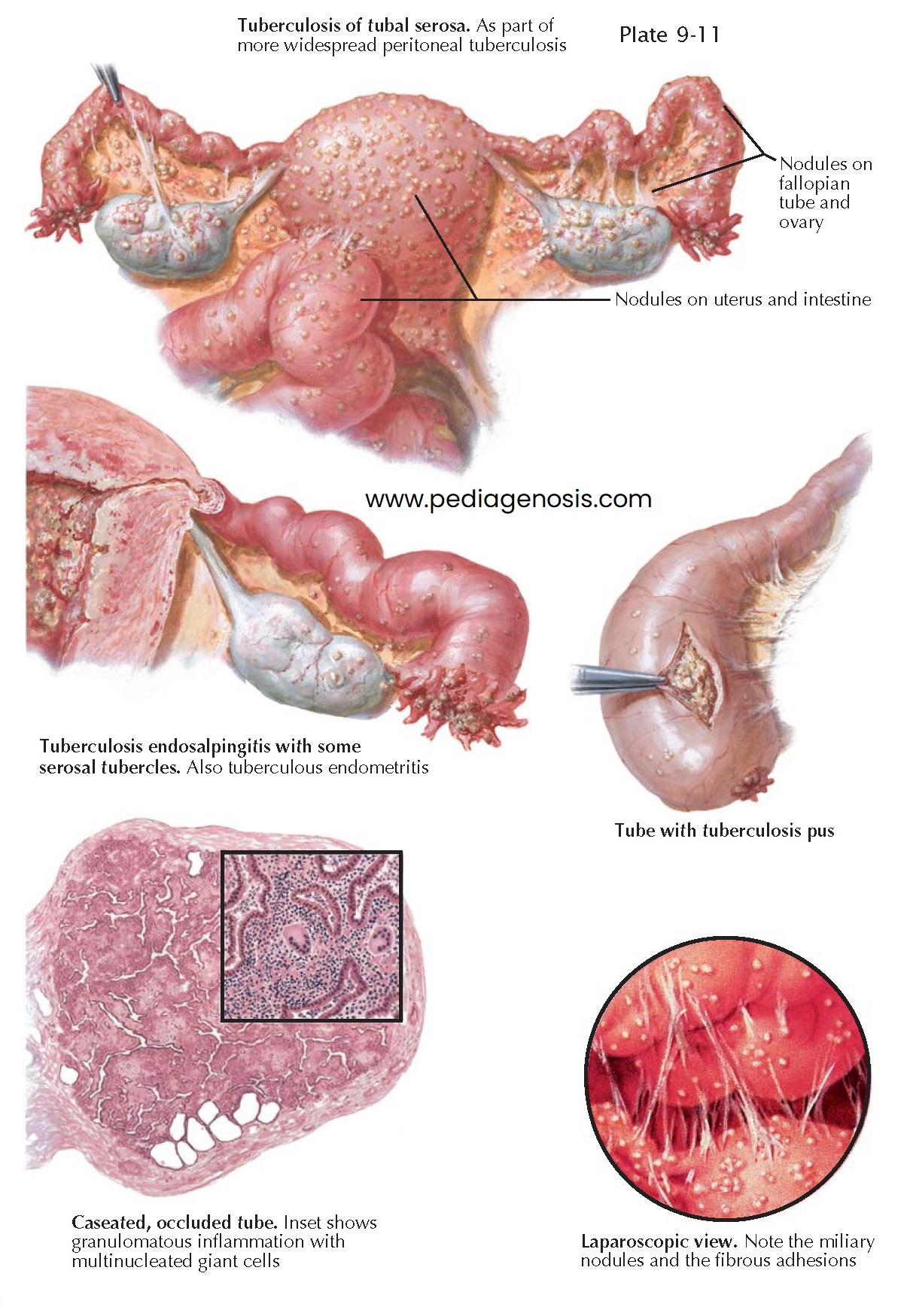 At one time, about 10% of all inﬂammatory disease of the tubes was tuberculous. Tuberculosis of the upper genital tract, primarily chronic salpingitis and chronic endometritis, is now a rare disease in the United States. However, pulmonary tuberculosis is steadily increasing in the United States, and with this rise it is likely that the incidence of pelvic tuberculosis also will increase. Tuberculosis is a frequent cause of chronic pelvic inﬂammatory disease and infertility in other parts of the world and may be encountered in immigrants, especially those from Asia, the Middle East, and Latin America. Genital tuberculosis may occur at any age but is most often encountered in women between 20 and 30 years old, though it will occur in postmenopausal women 10% of the time. Both tubes almost always are involved in the tuberculous disease, whereas the uterus is affected in slightly more than 50%. The other reproductive organs are only rarely involved.

As a rule, the infection is carried to the tubes by the hematogenous route from a primary focus in the lung or the hilar lymph nodes. Early in the course of pulmonary infection, the bacteria spread and the infection becomes located in the tubes, and from there the bacilli usually spread to the endometrium and less commonly to the ovaries. Despite these possible coinfections, the oviducts are the primary and predominant site of pelvic tuberculosis. Pelvic tuberculosis may be produced by either Mycobacterium tuberculosis or Mycobacterium bovis. The focus may be quite small and insigniﬁcant and may not cause any clinical symptoms. However, in the majority of cases, it is impossible to determine whether the infection has spread from the peritoneum to the tube or from the tube to the peritoneum. The possibility of an infection of the tubes by intracavitary or lymphatic ascent of tubercle bacilli introduced into the vagina by coitus with a tuberculous male cannot be denied. However, this mode of infection is extremely rare.

Changes in the fallopian tube as a result of an infec- tion with tubercle varies to a great extent. In the initial stages, the tubal mucosa may be studded with miliary tubercles. In women with tuberculous peritonitis, the serosa of the tubes, as well as the surfaces of the uterus and the ovaries, is dotted with small tuberculous nodules. In more advanced cases of tuberculous endosalpingitis, the miliary nodules coalesce to form an exudate that also inﬁltrates the outer layers of the tube, causing marked thickening of the tubal wall. Because the tuberculous process occurs in separate foci and not diffusely, the tube appears nodular (“rosary” form), with increased sinuosity. The inﬁltrate may undergo caseous necrosis, producing a pyosalpinx ﬁlled with caseous purulent material. In more favorable cases, the granulation tissue may become ﬁbrotic, shrunken, and calciﬁed.

The diagnosis of genital tuberculosis is difﬁcult in most cases. The patients quite frequently complain in a rather vague fashion only about amenorrhea and a dull pain in the lower abdomen (35% of cases); they sometimes request medical advice only because of sterility. Suspicious signs of genital tuberculosis are as follows: slow, insidious development of adnexal tumors; without any history, signs or symptoms of gonorrhea or operative infection; palpable nodules in the cul-de-sac; rosary-type thickening of the tubes; moderate deviations of temperature; and lymphocytosis. The ﬁndings at pelvic examination are normal in approxi-mately 50% of cases. An endometrial biopsy, probatory curettage, or the demonstration of tubercle bacilli in the uterine secretions gives evidence of tuberculous genital infection. Differentiation of tubercle bacilli requires culture.

The course of the disease becomes stormy if diffuse peritonitis intervenes or if a caseous pyosalpinx becomes secondarily infected by pyogenic bacteria. The course of the infection may be one of either an insidious or a rapidly progressing disease.