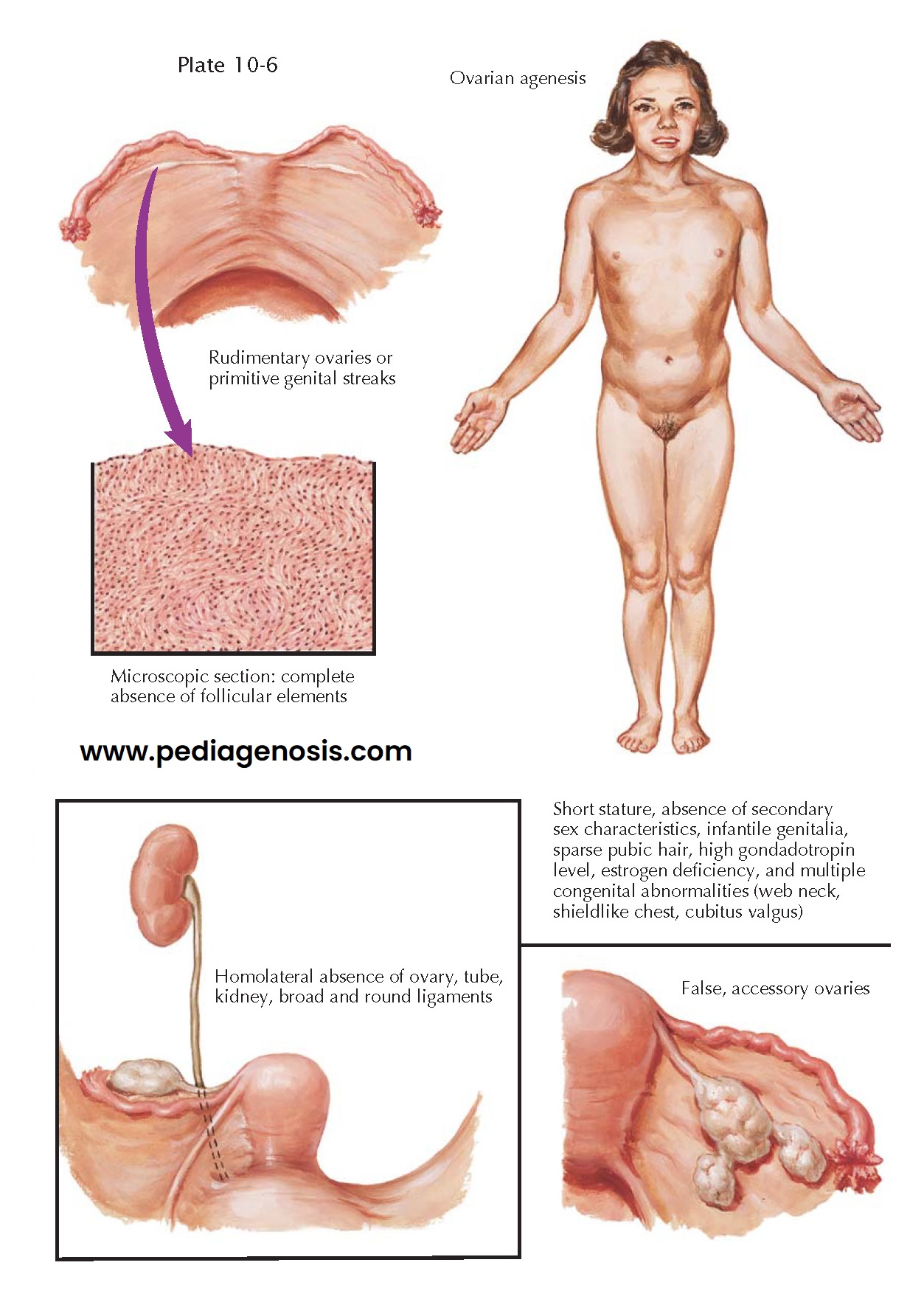 Ovarian failure is one of the hallmarks of Turner syndrome. The typical picture is produced not only by ovarian agenesis but also by coexisting congenital abnormalities of the skeletal, cardiovascular, and nervous systems. This entity is characterized by short stature, primary amenorrhea, sexual infantilism, high gonadotropin level, and multiple congenital abnormalities.

Following midgestation, there is a rapid increase in oocyte atresia as compared to normal ovaries, often resulting in early ovarian failure. The rate of complete depletion varies; some have primary amenorrhea with no secondary sexual characteristics, whereas others have varying degrees of pubertal development. The depleted ovaries are usually represented by thin, elongated, ﬁrm, whitish thickenings on the posterior surface of each broad ligament. On section, they are usually composed of spindlelike cells, arranged in whorls, without evidence of germ cells or follicles. The internal genitalia are markedly hypoplastic, being smaller than those seen in the newborn infant.

The diagnosis is usually made after puberty, when a primary amenorrhea and the absence of secondary sex characteristics are noted in conjunction with other congenital defects. The estrogen deﬁciency is manifested by undeveloped genitalia and breasts, sparse pubic and axillary hair, delayed epiphyseal union, osteoporosis, and ﬁne wrinkling of the skin (precocious senility).

The patients are short, averaging 52 in. and rarely attaining a height of more than 58 in. A variety of congenital anomalies have been associated with this syndrome, including cubitus valgus (increased carrying angle), webbing of the neck (symmetric winglike folds of skin extending from the base of the skull to the supraclavicular spaces), and a shield-like chest (broad, deep, stocky chest). Other abnormalities include spina biﬁda; syndactylism; malformation of the ribs, wrists, or toes; Klippel-Feil syndrome; coarctation of the aorta; deafness; mental deﬁciency; hypertension; and ocular disorders.

Laboratory abnormalities include a marked increase in gonadotropin levels, approximating titers found in castrated or postmenopausal women, and 17-ketosteroids that are only slightly reduced. This minimal decrease in adrenocortical function is insufﬁcient to prevent the growth of sparse pubic and axillary hair. Karyotyping will unequivocally establish the diagnosis.

Therapy is substitutional, since the ovaries are incapable of stimulation. Estrogens may be given daily for 2 to 6 months to start sexual development and then changed to cyclical administration. After 4 to 6 months of estrogen-only therapy, progesterone is usually added in a cyclical fashion to achieve a more natural endometrial shedding, reducing the risk of iatrogenic hyperplasia. Under this regimen the breasts develop, the axillary and pubic hair increase, the external and internal genitalia mature, and the vagina becomes more capacious.

Developmental anomalies of the ovary other than ovarian aplasia are rare. They include absence of one ovary, ectopic ovary, third ovary, accessory ovaries, and congenital displacements. The absence of one ovary is almost invariably associated with a failure in development of the corresponding tube, half the uterus, a kidney, and the ureter. An ectopic ovary, usually with only the osteal end of the tube attached, may be present in the retroperitoneal lumbar region or inguinal area. A third ovary is exceedingly rare. It may conceivably arise from a duplication of the gonadal site. This diagnosis is unquestionable if an associated third fallopian tube is present. Such a true, supernumerary ovary may be intra-or extraperitoneal and is prone to the development of neoplastic cysts, teratomas, or sarcomas. False, accessory ovaries are separate segments of ovarian tissue, attached to a normally situated ovary by intervening bands of ﬁbrous or attenuated ovarian tissue. The term bipartite or succenturiate ovary is sometimes applied to this splitting or partitioning effect.