Menarche, or the ﬁrst menstrual cycle, heralds the onset of adult reproductive function, which continues until menopause, when the major part of ovarian function ceases. Between these events, the hormonal ballet of cyclic menstruation takes place. 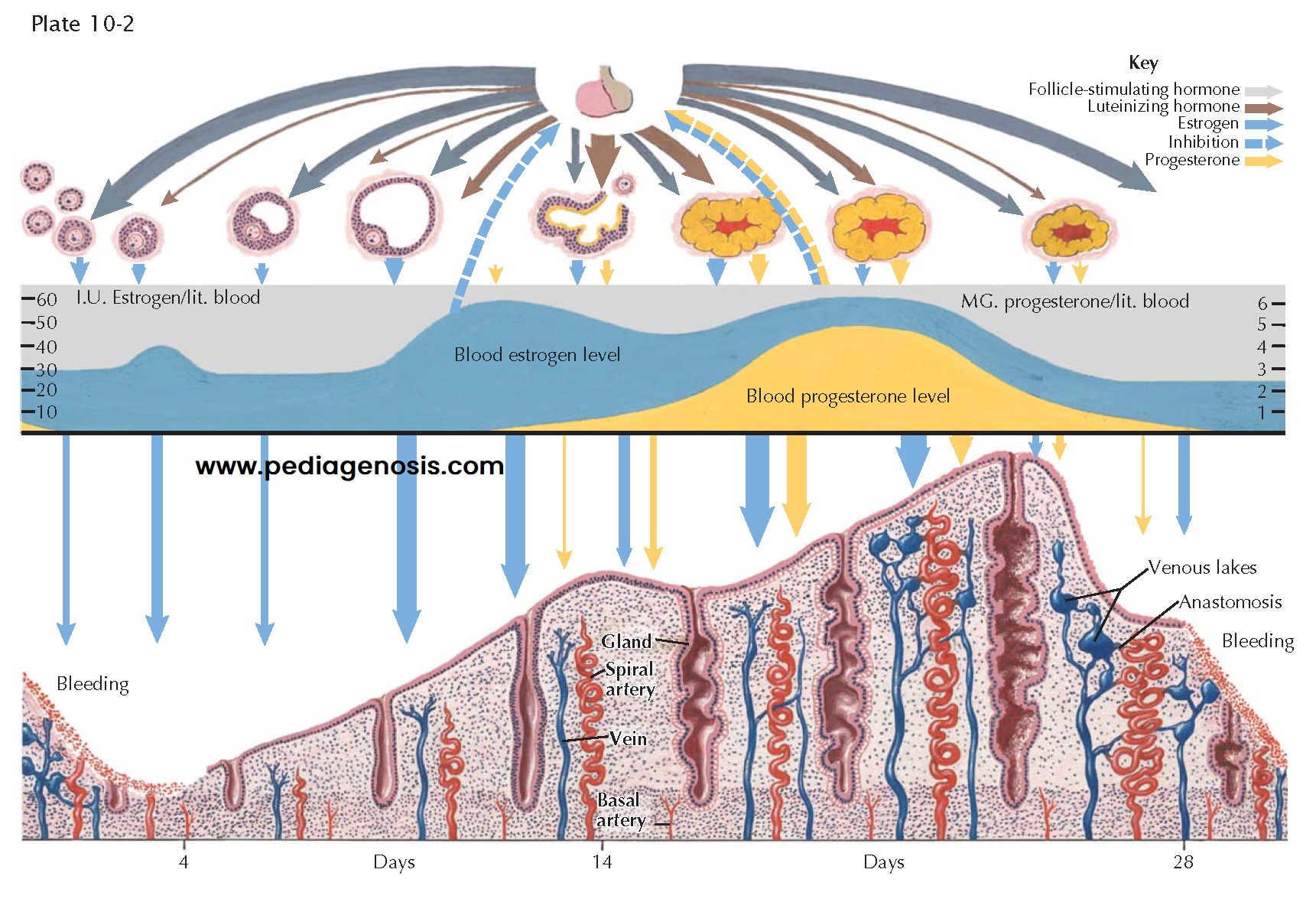 Two anterior pituitary gonadotropins and two ovarian steroids are primarily involved in this periodic occurrence of menstruation: the pituitary contributes follicle-stimulating hormone (FSH) and luteinizing hormone (LH), whereas the ovary secretes-estradiol and progesterone.

Up to puberty—even during fetal life—ovarian follicles are constantly developing to a stage in which an antrum has formed, regressing then to become atretic. Eventually, one or more follicles produce enough estrogen to cause a proliferation of the endometrium. It is unlikely that any of these early follicles, though producing estrogen, achieve ovulation; more likely, atresia sets in and the endometrium breaks down, with resultant bleeding. It is probable that the mature cycle will not become established for several months after this, the ﬁrst menstruation.

At the onset of menstrual ﬂow (day 1), production of estrogen is low but FSH levels rise and initiate another round of folliculogenesis. A cohort consisting of a number of follicles begins the maturation process approximately 375 days prior to day 1 of the menstrual cycle. By the onset of menses, these have matured enough to respond with growth and an increase in estrogen. Most of the follicles, however, have a relatively short life. Their granulosa cells and ovum degenerate, leaving an atretic follicle. A few continue to enlarge, but in most cycles only one emerges as the mature graaﬁan follicle that ruptures or ovulates about day 14.

Through about day 12 of the cycle, the secretion of FSH decreases with the increase of estrogen production. Although follicle growth beyond the stage of antrum formation must be initiated by the pituitary and continues to be dependent on this stimulus for the ﬁrst week or so of the cycle, after about day 8 further development is autonomous. A surge of LH (and to a lesser extent FSH) at midcycle reﬂects this rising estrogenic tide and it provides the endocrine trigger for ovulation.

After ovulation the estrogen level drops slightly during a lag period between the functional peak of the mature follicle and that of the fully developed corpus luteum. Some uterine spotting or even bleeding for a day or two is not rare at this time (“midcycle bleeding”).

Within a few hours after ovulation, the empty cavity of the ruptured follicle becomes ﬁlled with blood clots, and a network of capillary ﬁngers stretches tentatively inward along ﬁbrin strands from the theca interna. Theca cells containing a yellow lipochrome, named lutein, proliferate centripetally at a rapid rate along with the capillary mesh. Progesterone production is quickly accelerated, and its effect can be detected by secretory changes in the endometrium within 48 hours after ovulation.

Stimulation of the thermal center in the brainstem, by progesterone, causes a rise in basal body temperature, which is sustained as long as the corpus luteum functions. Cervical mucus becomes scanty and viscid and, when rapidly dried on a slide, no longer crystallizes in a “fernlike” pattern. By day 20, the estrogen level is usually as high as that just before ovulation, and the corpus luteum has also reached a peak of production of progesterone.

Under the inﬂuence of estrogen and progesterone, growth and the secretory activity of the endometrium progress continuously through day 25 or 26. Unless fertilization has occurred, degeneration of the corpus luteum is initiated. With the consequent decline of both estrogen and progesterone, changes occur in the endo- metrium that lead inevitably to slough and necrosis. By day 28, the pituitary, now released from the inhibitive levels of estrogen, starts again and rapidly reaches its peak of FSH output, which supports a new crop of primary follicles for the next cycle.