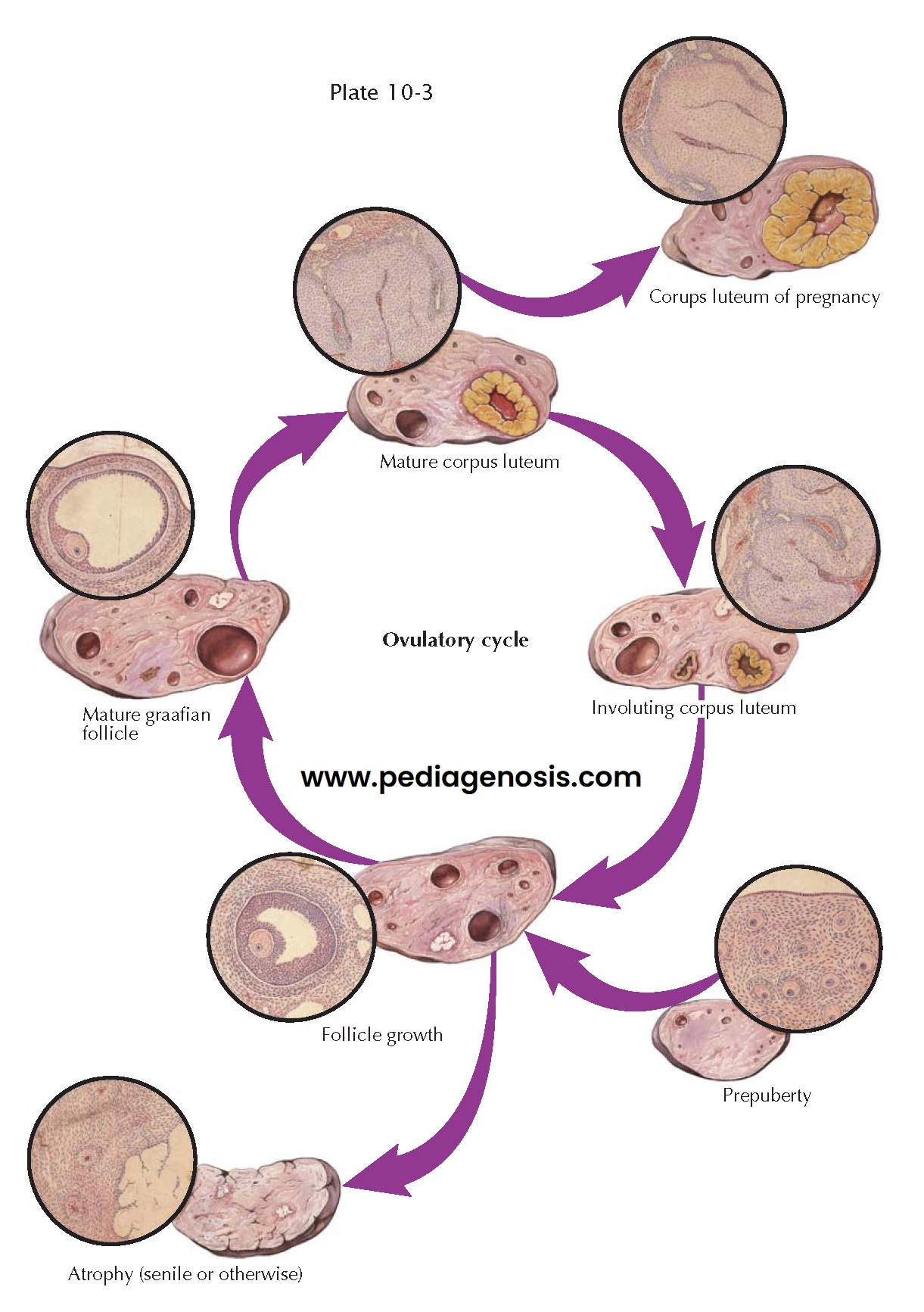 Although follicle growth is relatively even, it is slow for 10 to 12 days, during which time the granulosa layer thickens and the antrum becomes distended by increasing amounts of estrogen-rich liquor folliculi. After the follicles have reached a diameter of about 0.5 cm, they start their migration outward toward the surface, and about 12 days after the start of this cycle of growth, one follicle “gains ascendancy” in one of the ovaries, reach- ing a diameter of 1.5 to 2 cm in a short time. Simultaneously, it begins to protrude from the ovarian surface. This surge of development is accompanied by a similarly sudden wave of atretic processes, which wipes out all lesser developing follicles in both ovaries. Because the granulosa is the ﬁrst layer to degenerate in this change leading to atresia, it is probable that the theca is responsible for transient continuing secretion.

Whether follicle migration is accomplished by hor- monal or enzymatic reactions or merely by the physical forces involved in a rapidly expanding cystic structure enclosed in a tough, ﬁbrous stroma by a relatively inelastic tunica is not known. During this development under the inﬂuence of the luteinizing hormone (LH) surge, the ovum undergoes the ﬁrst maturation division and the ﬁrst polar body is extruded, reducing the number of chromosomes from 46 to 23. The granulosa cells become widely separated by edema, thus loosening the egg and its surrounding cumulus for detachment from the inside of the follicle cavity. Finally, through compression of the capillary net at the weakest point of the follicle wall near the surface, a relatively avascular area is produced, and through this area a break occurs. Intrafollicular pressure forces the egg, cumulus, and some detached granulosa cells with the liquor folliculi out into the peritoneal cavity.

Bleeding to some degree from the break in the richly vascular theca interna always attends ovulation. Usually, the rupture point is rapidly sealed off, though in patients with compromised clotting ability, this can result in hemorrhage. The cavity of the follicle is ﬁlled with blood-containing ﬂuid—the so-called corpus haemor-rhagicum—and an immediate differentiation of cells sets in, which spreads inward from the granulosal remnants. These lipid-and pigment-containing cells—the lutein cells—grow on a network of capillaries from the theca interna. This process causes an appearance of infolding as the walls of the former follicle thicken and encroach more and more on the ﬁbrin-containing, blood-ﬁlled cavity ultimately representing the mature corpus luteum. When pregnancy occurs, this development continues under the inﬂuence of human chorionic gonadotropin and increases until the bright-yellow body may make up as much as one half the total volume of the ovary—the corpus luteum of pregnancy. Some time after the second month of gestation, a slow process of regression of the corpus luteum occurs and is accompanied by the luteal–placental shift, where the placenta becomes the primary organ of hormonogenesis for the remainder of pregnancy.

If conception does not take place, the fate of the corpus luteum is involution. The crenated, yellow margin shrinks relatively rapidly, and the lutein cells degenerate into amorphous, hyaline masses held together by strands of connective tissue. The yellow color is in most part lost. The shrunken convolutions of hyalinized material are known as a corpus albicans. It is during this regressive phase that the decrease of estrogen and progesterone production prompts a new output of pituitary gonadotropins, producing stimulation of a new crop of ovarian follicles, and a new ovula- tory growth cycle is once more initiated.

The senile ovary is a shrunken and puckered organ, containing few if any follicles, and made up for the most part of old corpora albicantia and corpora atretica. In the menopause, the senile ovary continues to produce hormones, albeit at lower levels and with a more androgenic proﬁle.