The placenta provides no barrier to the high concentration of maternal estrogens prior to parturition. As a result, the infant’s breasts may show some enlargement, and milk can occasionally be expressed. The external genitalia are precociously developed, and the endometrium has been stimulated to proliferate. Within a week or so after birth, all the stigmata of estrogen stimulation recede. 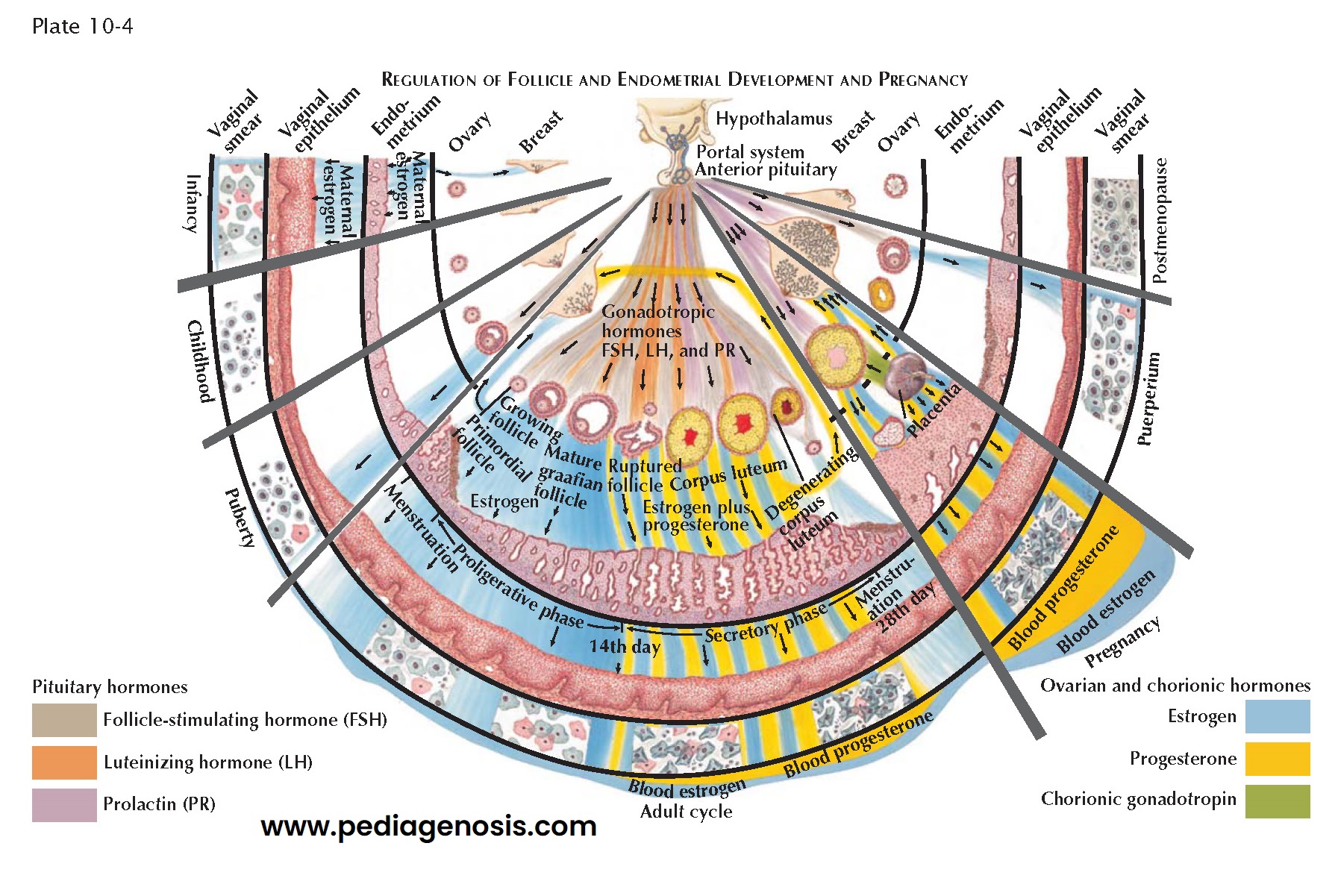 From the postnatal recessional changes to the time of puberty, the ovaries gradually show a buildup of interstitial tissue from an accumulation of ﬁbrous stroma, as a constant succession of primordial follicles degenerate in atresia.

Pituitary maturation and consequent secretion of gonadotropins results in the initiation of enhanced ovarian steroid production at the time of puberty. The uterus is the ﬁrst to respond and the endometrium proliferates with the development of straight, tubular glands. Next, the vagina thickens and becomes stratiﬁed, with corniﬁed superﬁcial estrogenic cells appearing. In the ovary, primordial follicles progress beyond the stage of a one- or two-layer granulosa with a tiny antrum and exhibit identiﬁable several-thickness granulosa and theca interna layers. In the breast, the areolae show pigmentation along with a domelike change, becoming elevated as a conical protuberance. Fat is deposited about the shoulder girdle, hips, and buttocks, and the adult pelvic and, later, the axillary hair patterns typical of the female begin to develop.

In the decade of adolescence, the skeletal system reacts to estrogen, ﬁrst, by an accelerated growth rate of the long bones, and, second, by a hastening of epiphyseal closure, the balance affecting ﬁnal height.

In the mature cycle, the endometrium undergoes cyclic changes (described elsewhere) under the stimulus of estrogen secreted by ovarian follicles in response to follicle-stimulating hormone (FSH). By day 12 in a typical 28-day cycle, one follicle attains dominance and exhibits a rapid growth toward maturity. The release of luteinizing hormone (LH) at midcycle on day 14 induces ovulation of the mature follicle and initiates progesterone excretion from the rapidly forming corpus luteum. Endometrial glands become saw-toothed and secretory. If fertilization and implantation do not occur, the corpus luteum degenerates on about day 26, and in consequence with the rapid withdrawal of its estrogen and progesterone secretion the endometrium shrinks, undergoes autolysis, and breaks away with bleeding on day 28.

When conception occurs, the early excretion of chorionic gonadotropin maintains the corpus luteum. In pregnancy, the peak production of chorionic hormone is seen by about day 90 after the last menstrual period, declining thereafter to a plateau. The corpus luteum is responsible for increasing progesterone and estrogens throughout the ﬁrst 3 months, after which the placenta takes over until the end of the pregnancy. The augmentation of both estrogen and progesterone is approxi-mately linear throughout the 9 months of gestation. The breasts react to the increasing steroid stimulation with an extension of both ductile and alveolar growth, and there is congestion without actual lactation.

The withdrawal of estrogen and progesterone after placental delivery combined with the psychoneural mechanisms initiated by the suckling reﬂex bring about the release of prolactin. Breast tissues, already conditioned by growth, respond with milk production. Ovarian activity is often held in abeyance for approxi-mately 6 months in women who are fully breastfeeding; it may well occur sooner in women who are partially breastfeeding. Reestablishment of the pituitary–ovarian cycle can, and often does, take place before weaning, so that another conception can occur before the advent of a menstrual ﬂow.

In the United States, menopause occurs late in the fourth or early in the ﬁfth decade (mean age 51 ± 2). The ovaries no longer contain any follicles capable of responding to pituitary stimulation, and increasing amounts of FSH are released in response to lower estrogen and inhibin levels. Estrogen deﬁciency is reﬂected by senile changes in the breasts, uterus, and vagina, and also in the skin, bony skeleton, and vascular system.