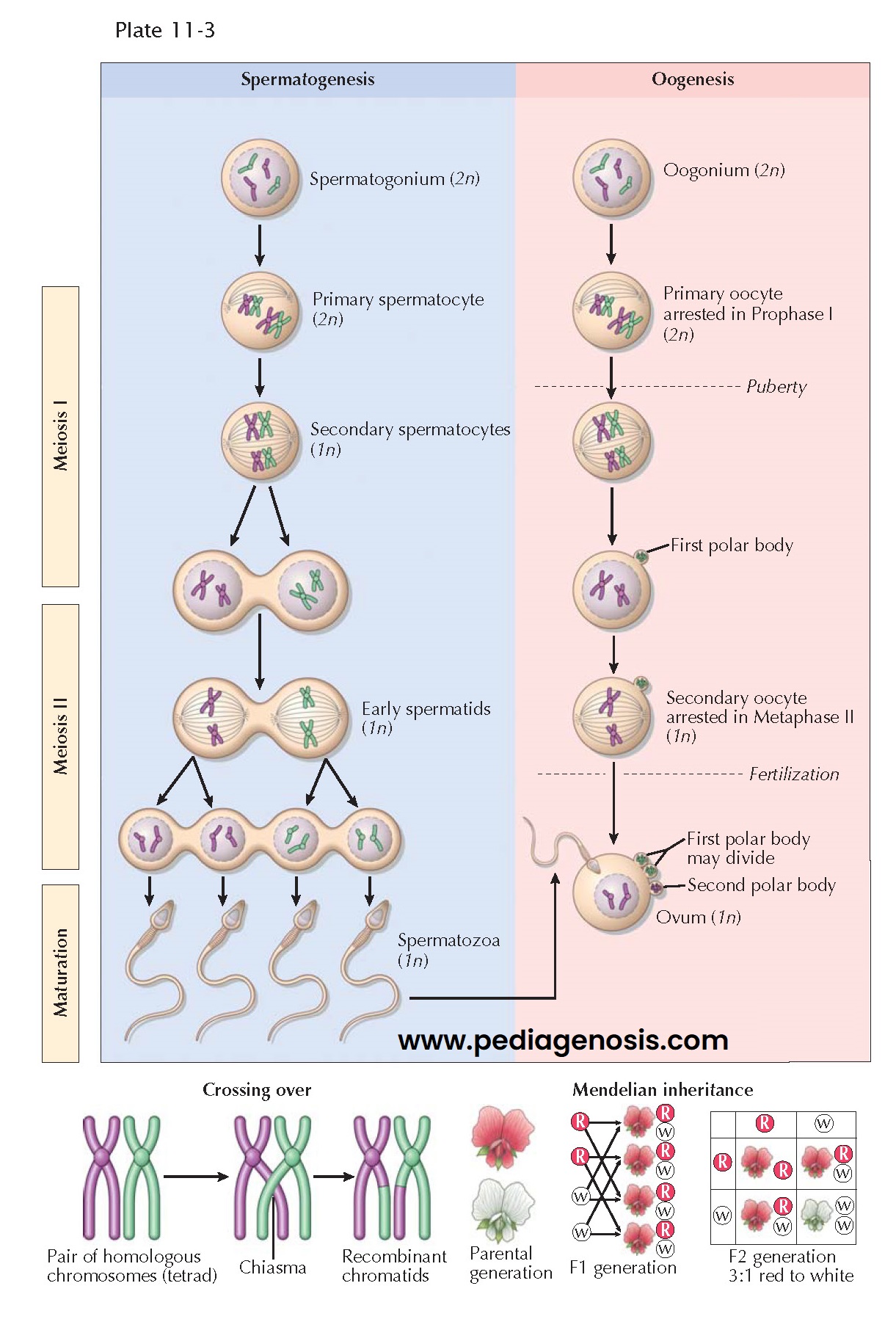 The passage of genetic material, and thus information, across generations is one of the prime functions, if not necessities, of reproduction. In sexual reproduction the union of haploid gametes allows both parents to contribute to the genetic makeup of the new individual, but also allows opportunities for new combinations and permutations, ensuring genetic diversity and the acquisition of new genetic traits.

To achieve the ﬁnal haploid state, the gamete must reduce its genetic content through meiosis. Two meiotic cell divisions are required to accomplish this goal (Meiosis I and II). In the male, meiosis generates four haploid gametes of equal reproductive potential, whereas in the female, the process generates only one oocyte. Sperm production begins at puberty and continues throughout life, with several hundred million sperm produced daily. In the female, meiosis begins during fetal life but arrests in prophase I until the oocyte begins maturation. (Oocytes in the early stage [pro-phase] of meiosis may be seen in the female fetus at 10 to 12 weeks’ gestation.) Of the ﬁve stages of meiosis necessary to form the oocyte, prophase I lasts the longest, occurs exclusively during fetal life, and sets the stage for genetic exchange that ensures genetic varia- tion. Reentry into meiosis from the quiescence of child-hood is signaled by the endocrine changes of puberty. Following maturation of the pituitary–hypothalamic–ovarian axis during puberty, one oocyte each month will complete meiosis I and be released by the process of ovulation. Meiosis II proceeds if fertilization occurs.

In simple mendelian terms, genes that can provide phenotypic expression of their given trait, despite the allele they are paired with, are known as dominant, whereas those that are not expressed except when paired with another similar gene are termed recessive. This distinction is based on phenotypic expression, not the gene’s ability to direct protein synthesis. In the case of a “defective” gene, the presence of a healthy gene donated by the other parent may provide sufﬁcient quantities of the needed protein that the cell, and thus the individual, is phenotypically normal. This distinction also ignores nuances such as selective gene inactivation, downregulation, and other newer insights into the complexity of gene function. This is still a useful construct clinically and when counseling patients about the risk of inheritable diseases or conditions.