In roughly 3.4% of births in the United States, two or more fetuses coexist. This rate is rising, having done so by about 70% since 1980. In approximately 1/10,000 births, there will be spontaneously occurring triplets. The rise in multiple births is thought to be due to the use of fertility drugs and other technologies, and to an increased rate of childbearing in women older than 30, who are more likely to conceive multiples. Interestingly, up to 50% of twin pregnancies identiﬁed in the early weeks will silently abort one fetus (with or without bleeding). 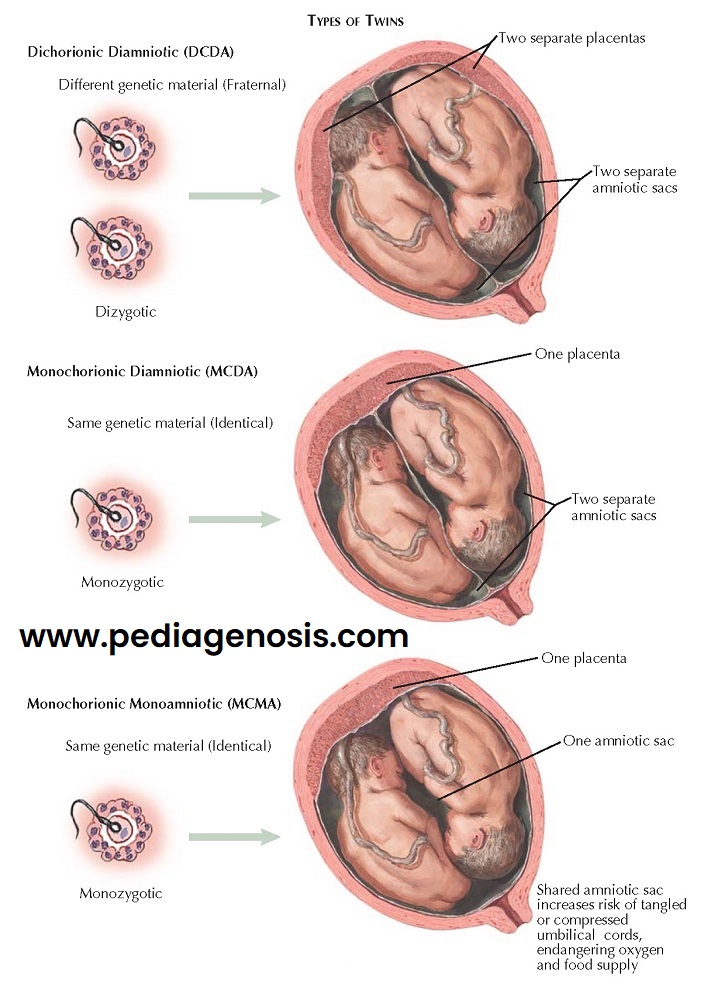 The ﬁrst weeks following fertilization represent the most critical period for the success of a pregnancy. It is also during this period that the fertilized egg can split to form one or more “identical” (monozygotic) embryos. This occurs in about 4/1000 births. When more than one egg is released and fertilized during the same menstrual cycle (naturally or through assisted ovulation), fraternal (dizygotic) twins, triplets, or higher order multiples can result. Dizygotic twins are more common in mothers who are themselves a dizygotic twin.

Multiple gestations are responsible for a disproportionate share of perinatal morbidity and mortality, accounting for 17% of all preterm births (before 37 weeks of gestation), 23% of early preterm births (before 32 weeks of gestation), 24% of low-birth-weight infants (2500 g), and 26% of very-low-birth-weight infants (1500 g). Hospital costs for women with multiple gestations are on average 40% higher than for women with gestational-age-matched singleton pregnancies because of their longer length of stay and increased rate of obstetric complications.

The possibility of a multiple gestation should be considered any time there is a discrepancy between uterine size (larger than expected) and gestational age or when multiple fetal heart tones are heard by auscultation or Doppler ultrasound study. Establishing the presence and number of fetuses early in gestation is important not only for family reasons, but also the presence of a multiple gestation increases the risk of gestational diabetes and other abnormalities. Multiple gestations also cause different levels of gestation-sensitive laboratory tests, such as maternal serum-fetoprotein, which would be interpreted as abnormal in a normal, singleton pregnancy. Genetic amniocentesis may be considered for selected patients because twin gestations have twice the rate of abnormalities (monozygotic have a 2% to 10% rate). Furthermore, in multiple gestations, chorionicity can best be determined ultrasonically early in pregnancy by assessing the thickness of the dividing membrane between the gestational sacs; as pregnancy progresses, this distinction becomes more difﬁcult.

To provide nutritional support for a multiple gestation, the mother should increase her caloric intake by roughly 330 kcal (twins) more than that normal for pregnancy. Appropriate iron and folic acid supplementation should also be ensured.

Perinatal morbidity and mortality for multiple gestations is 2 to 5 times higher than for singleton gestations. Preterm delivery (50%) is the most common cause of morbidity or mortality. Indeed, most twin pregnancies will deliver between 36 and 38 weeks of gestation. Other complications include intrauterine growth restriction (12% to 47% vs. 5% to 7% in singletons) or discordant growth, cord accidents, hydramnios, con- genital anomalies (2 times increase), and malpresentation. Monozygotic twins have a 1% incidence of a monoamniotic sac that carries a 50% fetal mortality due to cord entanglement or conjoined twins. One-ﬁfth of triplet pregnancies and one-half of quadruplet pregnancies result in at least 1 child with a major long-term handicap, such as cerebral palsy. When matched for gestational age at delivery, infants from multifetal pregnancies have a nearly threefold greater risk of cerebral palsy.