PLACENTA I - FORM AND STRUCTURE

PLACENTA I - FORM AND STRUCTURE

The normal placenta is depicted on this page, and some abnormal forms are shown subsequently. In the description, the characteristic features of both normal and abnormal forms have been integrated. 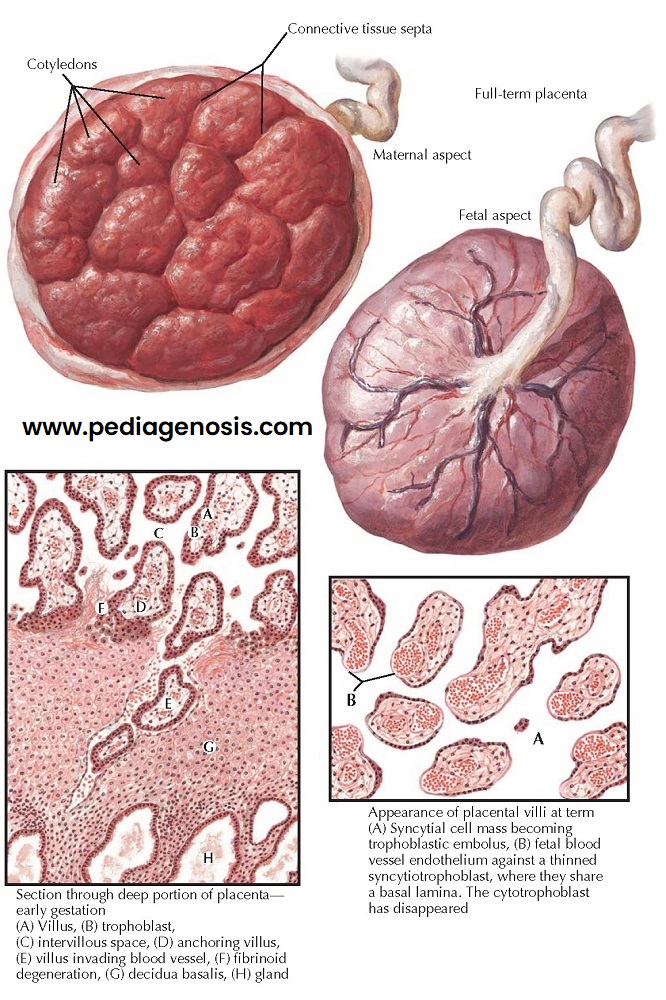 The placenta at term is ﬂat, cake-like, round or oval, 15 to 20 cm in diameter, and 2 to 3 cm in breadth at its thickest parts. It weighs 500 to 600 g, or about one-sixth the weight of the fetus. Oversized placentas (placentomegaly) are found in cases of erythroblastosis and syphilis and sometimes without evident reasons. Numerous but of little apparent clinical importance are the many variations in placental shape, in spite of the fact that they may result from conditions such as retro- placental hemorrhage, abnormal nidation sites, and inadequate decidual blood supply.

The maternal aspect of the normal placenta is lobulated, because short decidual septa separate the major cotyledons. The lobulation may be accentuated, as in erythroblastosis, or obliterated for unknown reasons. The margin of the normal placenta, where decidua, chorionic plate, and fetal membranes meet, appears as a gray, opaque ring caused by the underfolding of membranes and the decidua marginata. It is here that the marginal sinus is usually found. This structure pursues a tortuous, irregular course around the margin of the placenta. It often becomes coiled and is difﬁcult to open. Foci of obliteration, thrombosis, or rupture of the marginal sinus are not infrequently encountered. This sinus provides the major drainage of maternal blood from the hemochorionic interface. The underfolding of the membranes seldom exceeds 1 cm, but in cases of placenta circumvallata it might be quite extensive, and the underlying villi might have degenerated or become ischemic, resulting in a premature delivery of a stillborn fetus. However, even though the chorionic plate may be markedly decreased in size owing to an extensive underfolding, the chorionic villi are usually well vascularized, and this placental variety may have no clinical signiﬁcance.

The color of a normal placenta is uniformly red except for the subchorionic regions and the spaces between the major cotyledons, which appear darker red, carrying blood that is more venous in character. Cross-sectioning of gently handled and properly ﬁxed placentas exposes this difference and also permits the recognition of intraplacental thrombosis and ﬁbrin deposition quite frequently present in these venous areas. The ﬁbrin depositions, incorrectly called “white infarcts,” appear as white laminated nodules.

The normal placenta is of homogeneous spongy consistency. A few subchorionic nodules of ﬁbrin and scattered ﬂecks of gritty calciﬁcation are found frequently at term and have no recognized clinical or pathologic signiﬁcance.

Microscopically, a villus of a normal placenta consists of a core of collagenous stroma containing well-ﬁlled capillaries; these often bulge from the surface of the villus, bringing the fetal blood very close to the maternal bloodstream, separated by only a thin layer of fetal capillary endothelium and the thinned, stretched-out cytoplasm of the syncytial cells. The nuclei of the syncytial trophoblasts tend to pile up on the surfaces of villi. These aggregations are called placental giant cells.

They frequently are dislodged into the maternal circulation, where they form trophoblastic emboli to the mother’s lungs and can be found in pulmonary capillaries during pregnancy and the puerperium. They never proliferate in the lungs and are apparently harmless. (Fetal cells have been documented in the maternal circulation many years after delivery.) These are not to be confused with amniotic emboli, which consist of the particulate matter of amniotic ﬂuid.