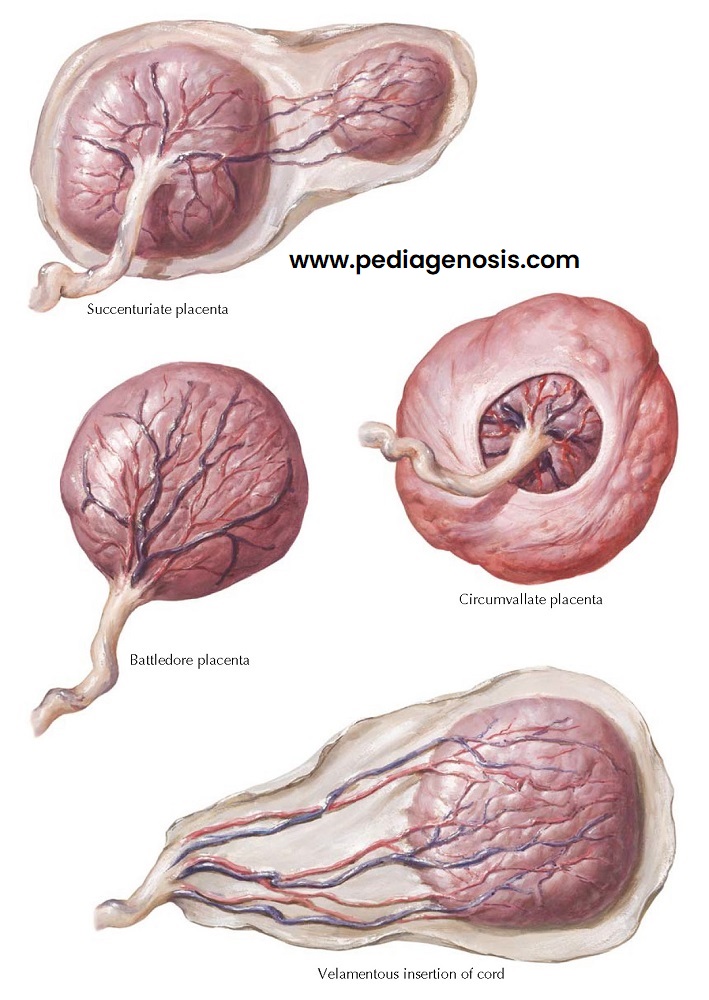 One placenta is the rule in singleton pregnancies. Occasionally, a bipartite placenta, consisting of two incompletely separated lobes with vessels extending from one lobe to the other before uniting with the umbilical vessels, may be encountered. Two parts, including the blood vessels, may also be completely separated by the fetal membranes and present a placenta duplex. In multiple pregnancy either more than one placental mass or one placenta, but with more than one amniotic sac, may be found. Monozygotic twins generally have two amnions but only one chorion (diamniotic monochorionic twins), which usually does not extend into the wall between the two sacs. Rarely are both twins in one amniotic sac (monoamniotic monochorionic twins), and these carry a 50% fetal mortality due to cord entanglement or conjoined twins. Monochorionic twins who share a single placenta are also at risk for twin-to-twin transfusion syndrome (TTTS). This syndrome is thought to result from an unbalanced net transfusion of blood between one twin and the other via placental vascular anastomoses. Despite a growing understanding of TTTS, the exact pathophysiology remains to be elucidated.

Separated from the main placental mass, small accessory lobules of placental tissue occasionally may be situated in the membranes. The blood vessels from such lobules may join the vessels in the main placenta before entering the cord, or no such vascular connection may exist. The former condition is called placenta succenturiata; the latter placenta spuria. Postpartum hemorrhage and infection may occur if retention of an accessory lobe or lobule in the uterus has remained unrecognized. Careful search for torn vascular stumps on the cord and on the fetal aspect, which usually reveal such conditions, is therefore indicated.

The umbilical cord averages 55 cm in length. It is usually white, moist, and coiled. It contains two arteries and one vein coiled around each other in a matrix of mucinous stroma called Wharton jelly. Microscopically, the cord is covered by one layer of cuboidal epithelium that is continuous at one end with the skin of the child and at the other with the lining of the amniotic sac. Two vessel umbilical cords (1% of deliveries) are associated with a 20% increase in the risk of fetal anomalies. This condition is believed to be caused by atrophy of a previously normal artery, most often the left.

In cases of intrauterine infection, the umbilical vessel walls may appear yellow with purulent exudate, and their lumina may be obliterated with gray thrombi. When the fetus dies in utero, the cord and fetal membranes (but not the placenta) present postmortem changes comparable to those found in the fetus. Occasionally, an umbilical vessel ruptures, with formation of a hematoma in the cord, membranes, or chorionic plate, during the third stage of labor when such an event causes no harm.

The cord may be centrally or eccentrically attached to the placenta. Attachment over the marginal sinus (battledore placenta) or within the membranes (velamentous insertion) is rare. The umbilical vessels, in the latter case, divide before they reach the chorionic plate. If a low uterine implantation has occurred, and if the membranes with the large umbilical branches have grown across the internal os (vasa previa), serious bleeding may occur during the last trimester or with rupture of the fetal membranes during labor.

The fetal membranes consist of the moist, glistening, transparent amnion and the slightly thicker but yet transparent chorion to which adhere varying amounts of shaggy, usually vascularized decidua vera. In normal pregnancies, the delivered decidua vera is scanty and is apt to be present in patches.