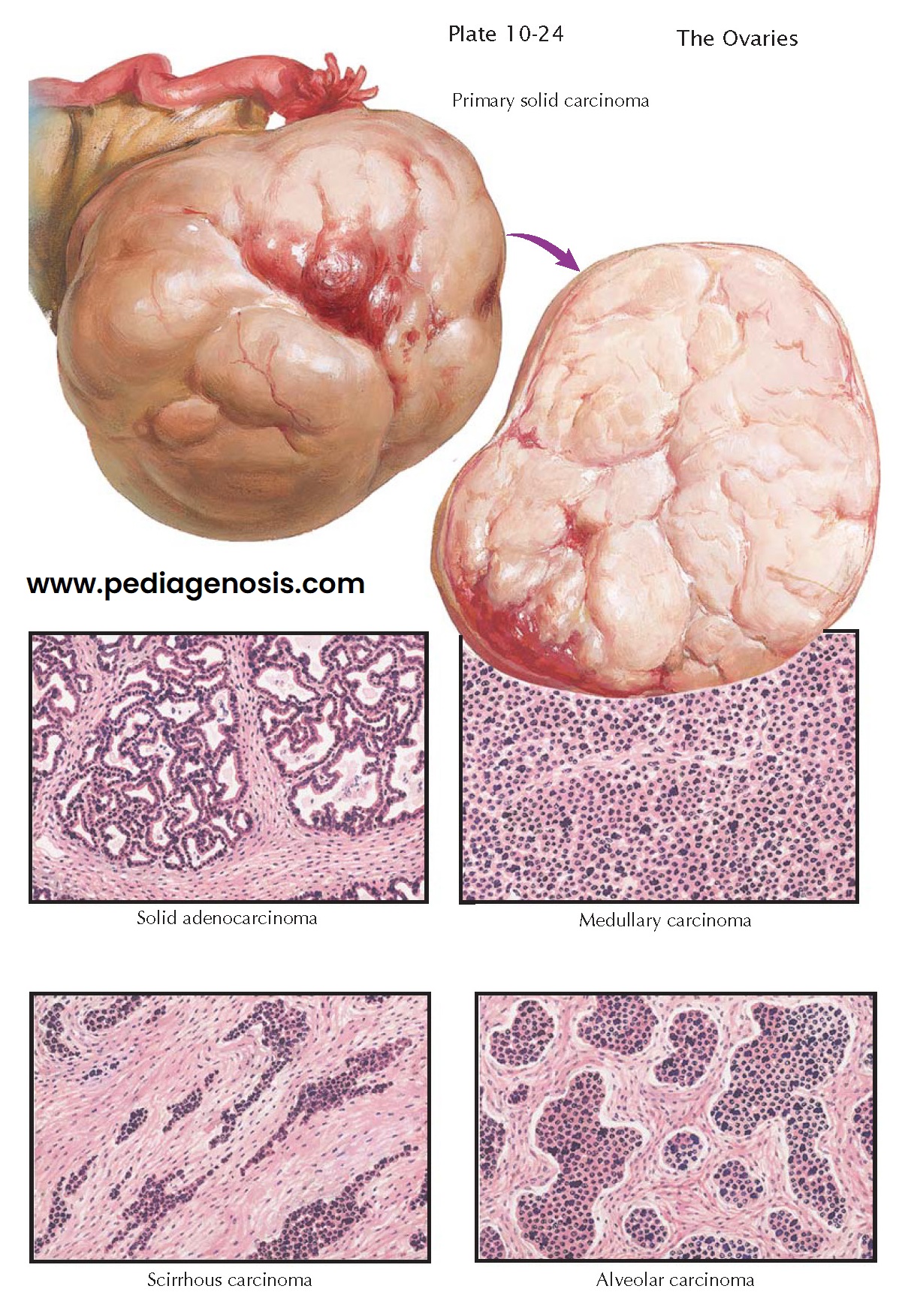 Primary solid ovarian carcinomas, also designated as the undifferentiated or unclassiﬁed group, may be arbitrarily divided on the basis of the architectural pattern of the epithelial and connective tissue elements into solid adenocarcinoma, medullary carcinoma, scirrhous carcinoma, alveolar carcinoma, plexiform carcinoma, clear cell, endometrioid, and adenocarcinoma with squamous cell metaplasia (adenoacanthoma). Primary solid carcinomas of the ovary are less common than the cystic variety. They may be unilateral or bilateral, small or large, ovoid or round, smooth or nodular, grayish- pink in color and solid. The consistency and color are dependent upon the proportionate amounts of epithelial and connective tissue elements. If very cellular, they are apt to be relatively soft, meaty, and pink, often with areas of degeneration. If less cellular, they may be ﬁrm and whitish gray. Focal necrosis, hemorrhage, cavitation, deposition of calcium, and psammoma bodies are not infrequent. In advanced cases, penetration of the capsule, inﬁltration, extension, and metastases occur.

Clear cell carcinoma is an ovarian tumor made up of cells containing large amounts of glycogen that gives them a clear or “hobnailed” appearance. These tumors may also arise in the endocervix, endometrium, and vagina. Cervical and vaginal tumors have been linked to in utero exposure to diethylstilbestrol. Despite the presence of hobnail cells that are similar to those seen in the endometrium, cervix, and vagina of women exposed to diethylstilbestrol (DES) in utero, there is no evidence that DES has a role in clear cell ovarian tumors. These tumors represent 5% to 11% of ovarian cancers. They present as a pelvic mass (up to 30 cm)— partially cystic with yellow, gray, and hemorrhagic areas with papillary projections generally present, giving the mass a velvety appearance; 40% of tumors are bilateral. These tumors are usually found as a malignant tumor and require surgical exploration and extirpation, includ- ing the uterus and contralateral ovary. Adjunctive chemotherapy or radiation therapy is often included based on the location and stage of the disease. In those sus- pected of having recurrent disease and other selected patients, second-look surgery may be desirable to assess progress and discover occult disease.

Endometrioid tumors consist of epithelial cells resembling those of the endometrium. In the ovary, these neoplasms are less frequent (approximately 5%) than either the serous or mucinous tumors, but the malignant variety accounts for approximately 20% of ovarian carcinomas. Endometrioid carcinomas usually occur in women in their 40s and 50s. They may be seen in conjunction with endometriosis and ovarian endometriomas, although an origin from endometriosis is rarely demonstrated. Most endometrioid carcinomas arise directly from the surface epithelium of the ovary, as do the other epithelial tumors.

Medullary carcinoma is rich in epithelial elements, with very little connective tissue. It is a virulent type of ovarian malignancy that occurs in young women, usually between the ages of 15 and 30 years. Because of its histologic appearance, it has been designated a small cell carcinoma. The tumor is often but not always accompanied by hypercalcemia. Even when found with early-stage disease, this is an aggressive almost uniformly fatal malignancy that has been refractory to surgery, chemotherapy, or radiation.

In scirrhous carcinoma, the ﬁbrous tissue predominates, whereas the epithelium is distributed in narrow columns or nests. Alveolar carcinoma is evidenced by irregular groups of epithelial cells, separated by connective tissue.

Carcinoma simplex refers to a fairly equal division between the cellular and ﬁbrous tissues. Plexiform carcinoma resembles scirrhous carcinoma, except that the epithelium is arranged in narrow anastomosing columns. Adenoacanthoma of the ovary refers to squamous cell metaplasia in adenocarcinoma. The squamous cells are large, polyhedral prickle cell . Keratinization and pearl formation may be observed.