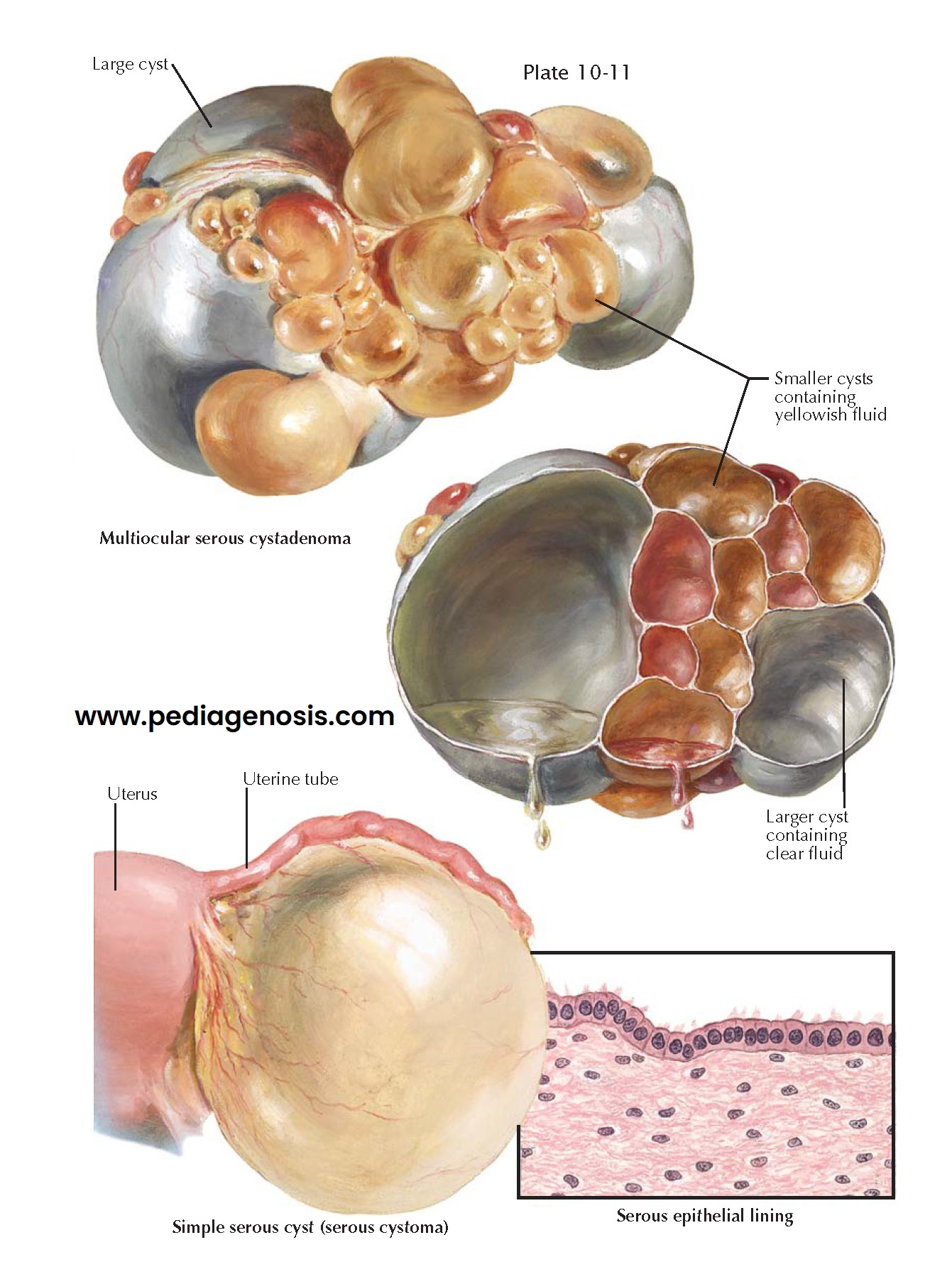 Cystadenomas are the most common ovarian neoplasms. Benign ovarian tumors are most frequently diagnosed at the time of routine examination and are asymptomatic. They are divisible, according to their lining epithelium, into serous and mucinous varieties. Approximately 90% of ovarian tumors encountered in younger women are benign and metabolically inactive. More than 75% of the benign adnexal masses are functional. Functional cysts are not true neoplasms but rather are anatomic variants resulting from the normal function of the ovary.

The proliferating elements in serous cysts include a connective tissue as well as an epithelial component. Depending upon the rate of growth and predominance of each of these constituents, a variety of neoplastic patterns have evolved. These present gross and microscopic differences of sufﬁcient degree to warrant division into subgroups. The simplest form is the serous cystoma, in which a single layer of cuboidal epithelium lines a ﬁbrous cyst wall. In serous cystadenomas, the epithelium shows increased adenomatous proliferation. Papillary serous cystadenomas manifest an additional tendency toward papillary epithelioid growths. In surface papillomas, a single layer of “serous” epithelium covers numerous ﬁbromatous excrescences. When ﬁbrous tissue proliferation is accentuated and the “serous” epithelium retains an adenomatous tendency, the term ﬁbroadenoma, or adenoﬁbroma, is applied. If this variant includes cystic dilations of conspicuous size, it may be designated as a serous cystadenoﬁbroma.

The simple serous cyst (serous cystoma) is a unilocular ovarian cyst lined by “serous” epithelium. Although a large size may be attained, it rarely exceeds that of an orange. It is usually unilateral, oval, or spherical in shape, thin-walled, smooth-surfaced, and grayish-white or translucent amber in color. On section, the thin walls collapse, with the escape of a clear, serous, watery, or straw-colored ﬂuid. The latter is rich in serum proteins and lacks the viscid quality of mucinous ﬂuid. The inner lining appears smooth and glistening. Microscopically, the characteristic “serous” epithelium is composed of a single layer of cuboidal or low cylindrical cells, with central, dark-staining nuclei. Cilia may be demonstrable. The lamellated, ﬁbromatous tissue comprising the rest of the cyst wall is devoid of adenomatous structures. Occasionally, ﬂattened, verrucous papillae may be found on the inner surface, made up of connective tissue cores covered by cuboidal epithelium similar to that lining the cyst.

The serous cystadenoma is a uni- or multilocular serous cyst of the ovary with glandlike, adenomatous, epithelial proliferations in its wall. It is generally smaller than the mucinous variety but may reach the size of a child’s head. On rare occasions, it may be huge. Bilateral ovarian involvement is frequent. When multilocular, the cystadenomas are irregular in shape, with a bossed, smooth surface, traversed by many ﬁne vessels. The color may vary in individual locules. A thickened, ﬁbrous wall may appear grayish white. Depending upon the degree of hemorrhagic discoloration, the

component cysts may appear amber, brown, red, blue, or purple. Hemisection of a multilocular serous cystadenoma reveals chambers of varying size. The intervening septa may be thin, thick, partial, or complete. Communications between locules are established as a result of pressure necrosis. In the more solid portions of the intercystic septa, small daughter cysts may be evident. Histologically, a typical single layer of cuboidal or low columnar ciliated epithelium lines the acini and cyst walls.

The grapelike cystadenoma is a variation of the serous cystadenoma. Multiple, individual pedunculated cysts that project from the surface of the ovary characterize it. The tumor is multicystic rather than multilocular. The term is derived from its resemblance to a bunch of grapes of varying size. The histologic features are similar to those of the cystadenoma.

Simple cysts and serous cystadenomas are benign neoplasms. Cystectomy or a partial ovarian resection may sufﬁce as therapy.