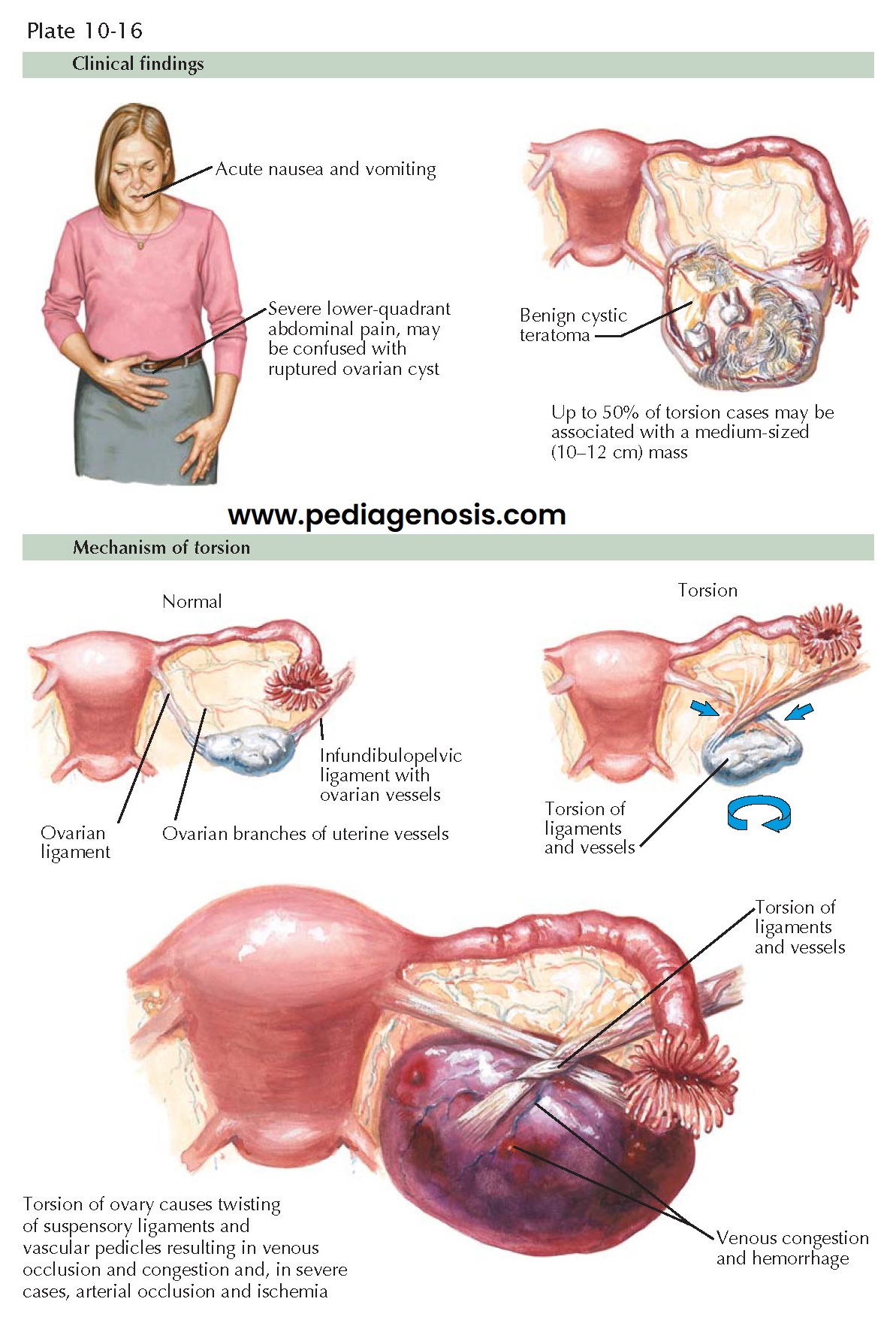 Adnexal torsion is the twisting of part or all of the adnexa on its mesentery, resulting in tissue ischemia and frank infarction. This usually involves the ovary but may include the fallopian tube as well. Although this accounts for only 2% to 3% of all gynecologic operative emergencies, it is nonetheless a signiﬁcant event that often results in the loss of the ovary. Torsion of the adnexa is usually associated with the presence of an ovarian, tubal, or a paratubal mass (50% to 60% have an ovarian tumor or cyst). The risk of torsion is higher during pregnancy (20% of cases) or after ovulation induction. The average age of patients suffering adnexal torsion is in the mid-20s.

Torsion in prepubertal females may be caused by a pelvic mass or due to mechanical factors unique to children. In early puberty the ovaries drop from their prepubertal position at the pelvic brim into the pelvis. This is driven by the pubertal surge of gonadotropins. Some young women may have longer supportive ligaments, predisposing them to torsion at this time. Approximately 60% of the time ovarian torsion occurs on the right side and is often confused with appendicitis. The sigmoid colon in the left lower quadrant helps prevent the left ovary from twisting.

The ﬁrst indication of torsion is generally abrupt, intense, and unilateral abdominal pain. This occurs with swelling and inﬂammation due to venous obstruction, which generally occurs before arterial obstruction. The pain of adnexal torsion is generally intermittent, with a periodicity that varies from hours to days or longer; this is in contrast to the variable pain caused by obstruction of the bowel, ureter, or common bile duct, which is more regular and frequent. The pain is often accompanied by nausea and vomiting (60% to 70% of cases), and physical examination most often can demonstrate a unilateral tender mass (90% of cases). Because these symptoms and ﬁndings can be nonspeciﬁc, the possibility of other causes such as an ectopic pregnancy, rupture or bleeding into a cyst, abscesses, or small bowel obstruction must all be considered.

Ultrasonography may demonstrate a cystic adnexal mass, but the acute character and intensity of symptoms usually encountered means that the diagnosis is most often made at the time of surgery. Doppler-ﬂow studies to demonstrate the presence or absence of blood ﬂow to the ovary may be helpful but the absence of ﬂow is not diagnostic of an adnexal torsion: the presence of blood ﬂow does, however, rule out complete obstruction and complete ischemia of the ovary.

Patients with conﬁrmed adnexal torsion (and those with a high degree of suspicion) are generally treated by surgical exploration. Conservative operative management may be possible in more than 75% of patients.

It is thought that irreversible ischemia may not occur for as long as 72 hours after the initial obstruction. This allows the ovary to be conserved by “detorsion” of the ovary. Most authors suggest removing an ovarian or tubal mass following “detorsion” to reduce the risk of recurrence. Part or the entire ovary may thus be salvaged if intervention takes place early enough in the process. Unfortunately, when signiﬁcant ischemia or underlying pathology is present, removal of part or all of the ovary may be required. There is insufﬁcient data to resolve the value or need for oophoropexy following detorsion.

Concerns about the possibility of freeing a thrombus from the obstructed venous supply of the adnexa have been raised. If such a thrombus were present, the possibility that this could embolize to the heart and lungs would militate against untwisting the adnexa. Although a theoretical risk, this has not been demonstrated to occur clinically, making conservative management of these cases more acceptable.