Anatomic Relationships of the Pituitary Gland

Anatomic Relationships of the Pituitary Gland 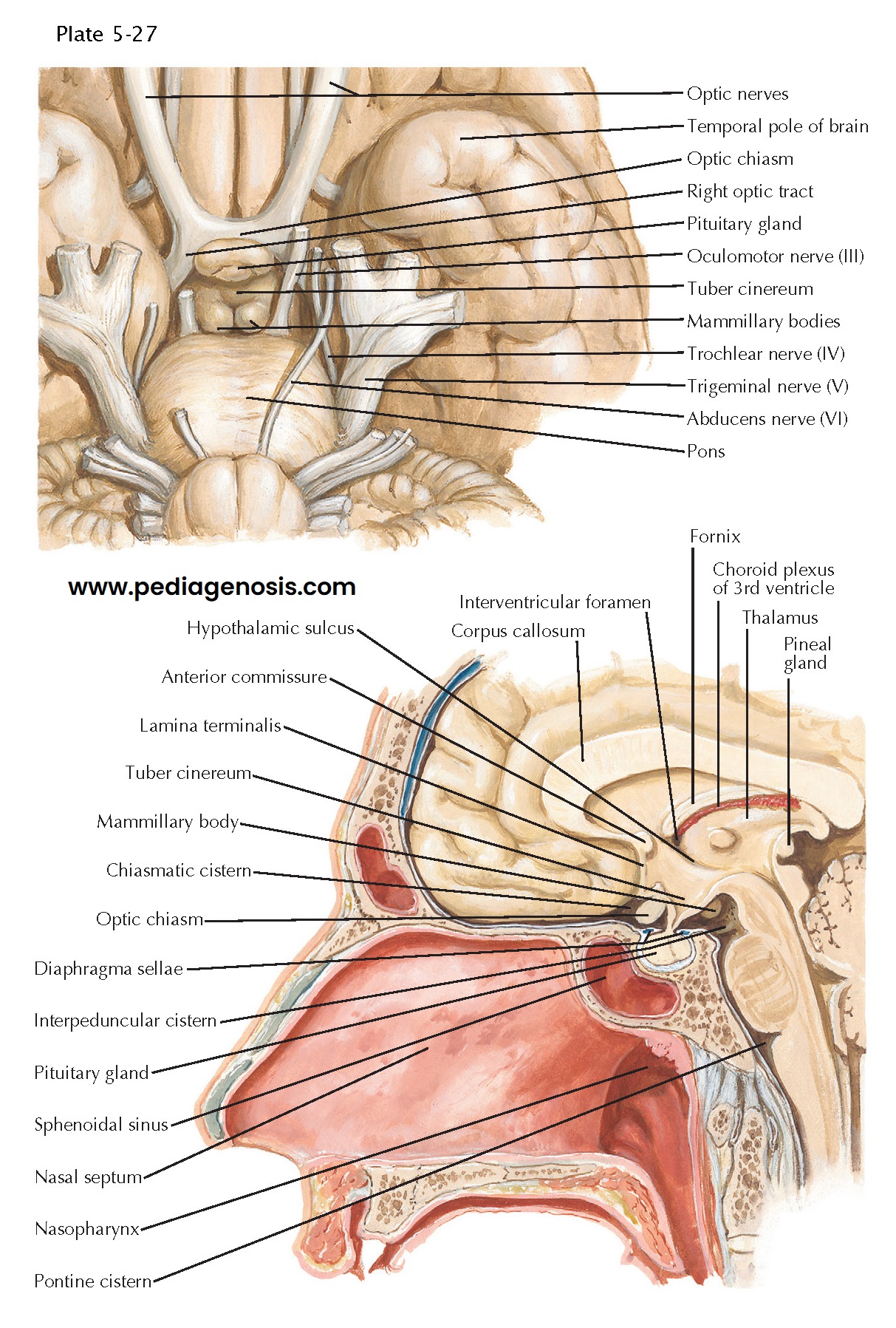 The pituitary gland resides in a depression (fossa) in the body of the sphenoid bone, termed the sella turcica. The tuberculum sellae forms the anterior wall of the sella, and the dorsum sellae forms its posterior wall. The pituitary is covered superiorly by a circular fold of dura mater, the diaphragma sellae. This sellar diaphragm is pierced by the pituitary stalk and the hypophyseal vessels. A fold of the arachnoid may herniate through the sellar diaphragm in some patients, thus extending the subarachnoid space within the sella (see MRI scan on the right in Plate 5-26 for an example). Chronic pulsatile pressure exerted by the cerebrospinal fluid may expand the sella, leading to the appearance of an enlarged, “empty sella,” which may be associated with hypopituitarism in some patients.

The optic chiasm rests superiorly to the diaphragma sellae. Nerve fibers originating in the nasal portion of each retina cross at the chiasm to the contralateral side and join ipsilateral nerve fibers originating in the temporal portion of each retina, which do not cross at the chiasm, to form each optic tract. The anatomic relationship between the pituitary gland and the optic chiasm is clinically important, because mass lesions within the pituitary may compress either the chiasm or other portions of the optic apparatus, giving rise to a variety of visual field defects. Specific places where the arachnoid separates from the pia mater form cisterns filled with cerebrospinal fluid, including the chiasmatic cistern and the interpeduncular cistern. These spaces can be distorted by space-occupying sellar lesions growing superiorly from the pituitary.

The hypothalamus is located superiorly to the pituitary gland and is bounded between the optic chiasm anteriorly, the caudal border of the mammillary bodies posteriorly, and the hypothalamic sulcus superiorly. Distinct hypothalamic nuclei regulate anterior pituitary function through the synthesis of several stimulating  hormones  (growth  hormone–releasing  hormone, corticotropin-releasing hormone, thyrotropin-releasing hormone, and gonadotropin-releasing hormone) and inhibiting hormones (somatostatin and dopamine), released at neuronal axon terminals present in the median eminence and the infundibulum. These hormones are carried via the hypophyseal portal system to the adenohypophysis, where they regulate hormone secretion in a specific manner. The inter-relationships between the hypothalamus and the posterior pituitary are detailed in Plate 5-26. Large lesions arising above the sella may impinge on the hypothalamus, interfering with its functions.

The thin sellar floor separates the pituitary gland from the underlying sphenoid sinus. The sellar floor can be expanded by slowly growing sellar masses, leading to remodeling of the sella, or eroded by sellar masses growing inferiorly. The close relationship between the sella, the sphenoid sinus, and the nasopharynx provides an important access route to pituitary surgeons. Using a trans-sphenoidal approach, many sellar masses can be resected with low morbidity.