Blood Supply of the Hypothalamus and Pituitary Gland

Blood Supply of the Hypothalamus and Pituitary Gland 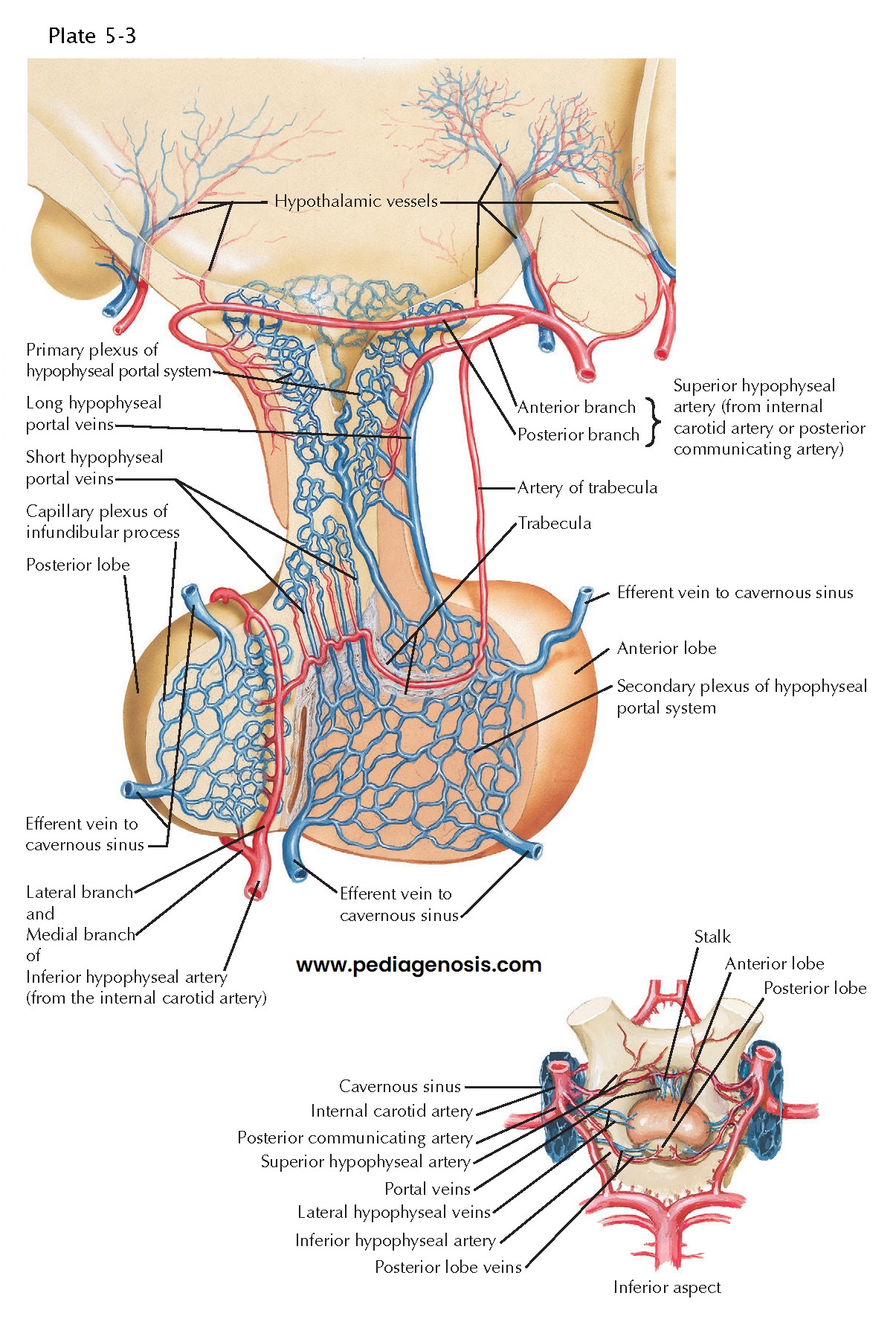 The anterior part of the hypothalamus, above the optic chiasm, is supplied by arterial feeding vessels from the anterior cerebral artery. These vessels densely penetrate the basal forebrain just in front of the optic chiasm, giving it the name the “anterior perforated substance.” The tuberal, or midlevel of the hypothalamus, is fed mainly by small branches directly from the internal carotid artery and the posterior communicating artery. Posteriorly, small penetrating vessels from the posterior cerebral arteries running through the inter-peduncular fossa give it the name “posterior perforated substance.” Many of these small blood vessels supply the posterior part of the thalamus, but some also provide blood to the posterior hypothalamus. The cell groups within the hypothalamus are not uniformly supplied with blood vessels. The paraventricular and supra-optic nuclei, which contain neurons that make the vasoactive hormones oxytocin and vasopressin, have particularly rich capillary networks.

The superior hypophyseal artery is one of the branches derived from the internal carotid artery. It supplies the pituitary stalk, where it breaks up into a series of looplike capillaries in the median eminence and pituitary stalk. The hypothalamic neurons that make pituitary releasing (and release-inhibiting) hormones send axons that terminate on these loops, which, unlike most brain capillaries, have fenestrations to permit easy penetration by these small peptide hormones (see Plate 5-6). These capillaries drain into the hypophyseal portal veins, which along with some branches of the inferior hypophyseal artery, provide blood flow to the adenohypophysis or anterior pituitary gland. The posterior pituitary gland is supplied almost entirely by the inferior hypophyseal artery. Because most of the blood flow to the anterior pituitary gland is from the portal system, it is possible, on occasions, for the gland to outgrow its blood supply. This occurs mainly during pregnancy or can occur when a pituitary adenoma, an otherwise benign tumor, becomes larger than can be accommodated by the blood supply. At this point, there is infarction of the pituitary, often with bleeding, which may become life threatening (pituitary apoplexy). The typical presentation is sudden onset of dysfunction of cranial nerve II, III, IV, or VI, with a severe headache that is generally localized between the eyes, and often impaired consciousness.

Finally, the fenestrated capillary loops in the median eminence not only allow egress of hypothalamic-releasing hormones to the anterior pituitary gland, but also permit blood-borne substances to enter the brain. The hormone leptin, which is made by white adipose tissue during times of plenty, is believed to enter the brain via the median eminence to signal satiety to cell groups in the basal medial hypothalamus. There is another area of fenestrated capillaries along the anterior wall of the third ventricle, called the organum vasculosum of the lamina terminalis, which may allow entry of other hormones, such as angiotensin, which may be involved in thirst and water balance, and perhaps some cytokines that may play a role in the fever response. These regions are called circumventricular organs because they are around the edges of the ventricles. Another circumventricular organ, the area postrema, is found at the outflow of the fourth ventricle in the medulla and is probably involved in emetic reflexes based on blood-borne oxins or hormones, such as glucagon-like protein 1.