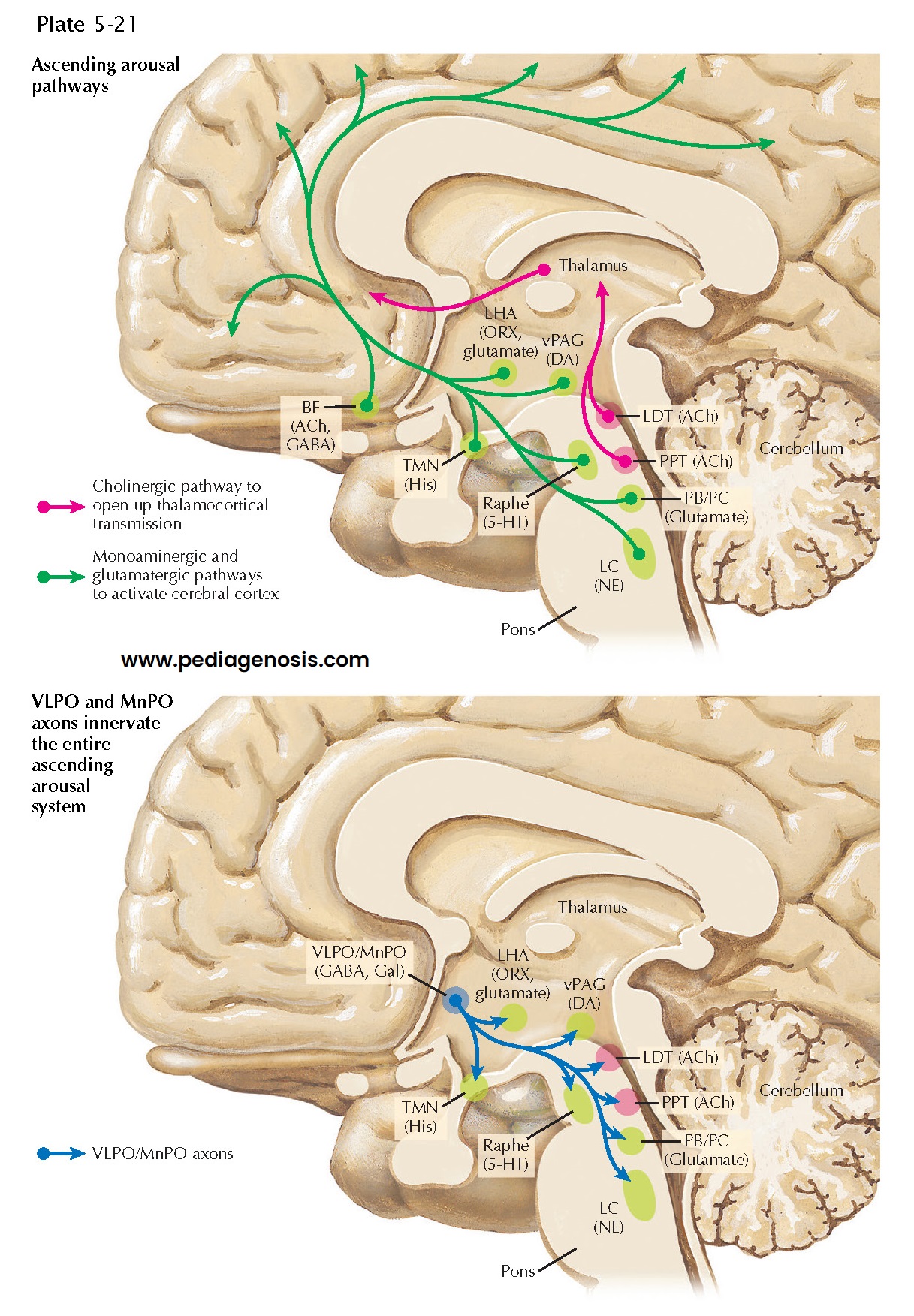 The brain is kept awake by an ascending arousal system that takes origin in the rostral pons and caudal mid-brain. The neurons that activate forebrain arousal mainly consist of specific populations of cells that contain monoamine neurotransmitters, acetylcholine (ACh), and the excitatory transmitter glutamate. The cholinergic neurons in the pedunculopontine tegmental (PPT) and laterodorsal tegmental (LDT) nuclei provide the major input to the thalamic relay nuclei and the thalamic reticular nucleus. The latter is a sheet of inhibitory γ-aminobutyric acid (GABA)ergic interneurons that sit on the surface of the thalamus. The cholinergic input inhibits the reticular nucleus and activates the relay nuclei, this enhancing thalamocortical transmission of sensory information.

At the same time, a series of monoaminergic cell groups in the upper brainstem provides an ascending pathway that largely bypasses the thalamus and goes directly to the cerebral cortex. These include noradrenergic (NE) neurons in the locus coeruleus (LC), serotoninergic (5-HT) neurons in the dorsal raphe and median raphe nuclei, dopaminergic (DA) neurons in the ventral periaqueductal gray matter (vPAG) and histaminergic (His) neurons in the tuberomammillary nucleus (TMN) in the hypothalamus. These are joined by glutamatergic neurons in the parabrachial and precoeruleus (PB/PC) nuclei. All of these cell groups send axons through the lateral hypothalamic area (LHA), where they are joined by ascending axons from the orexin (ORX) neurons and from glutamatergic neurons in the lateral hypothalamic area. The pathway then passes through the basal forebrain (BF), where additional cholinergic neurons (which innervate cortical pyramidal neurons) and GABAergic neurons (which innervate cortical inhibitory interneurons) join in. These inputs are thought to excite cerebral cortical neurons and to enhance their capacity for information processing.

During wakefulness, both of these pathways are active at a maximal rate. As the brain falls asleep, the electroencephalogram slows, the individual enters slow-wave (non–rapid eye movement [NREM] sleep), and the firing of all of these cell groups is diminished. However, intermittently during the sleep cycle, when the individual enters REM, or active dreaming sleep, the cholinergic neurons and some of the glutamatergic neurons in the parabrachial nucleus begin firing again at a high rate, while the monoamine systems stop firing altogether. This disparity in activity is thought to cause the dreaming state.

Sleep is regulated at least in part by two populations of neurons in the preoptic area. Median preoptic (MnPO) neurons appear to fire in response to prolonged wakefulness but do not by themselves produce sleep. However, neurons in the ventrolateral preoptic (VLPO) nucleus begin firing at the onset of sleep, and the two both continue to fire during sleep states.

The ventrolateral preoptic nucleus projects to the components of the ascending arousal system, and its neurons contain both the inhibitory neurotransmitter GABA and the inhibitory neuropeptide galanin (Gal), which appear to be important in turning off arousal and permitting sleep to occur. GABAergic neurons in the median preoptic neurons also contact some of these same targets. Animals with ventrolateral preoptic lesions may lose a third or more of their total sleep.