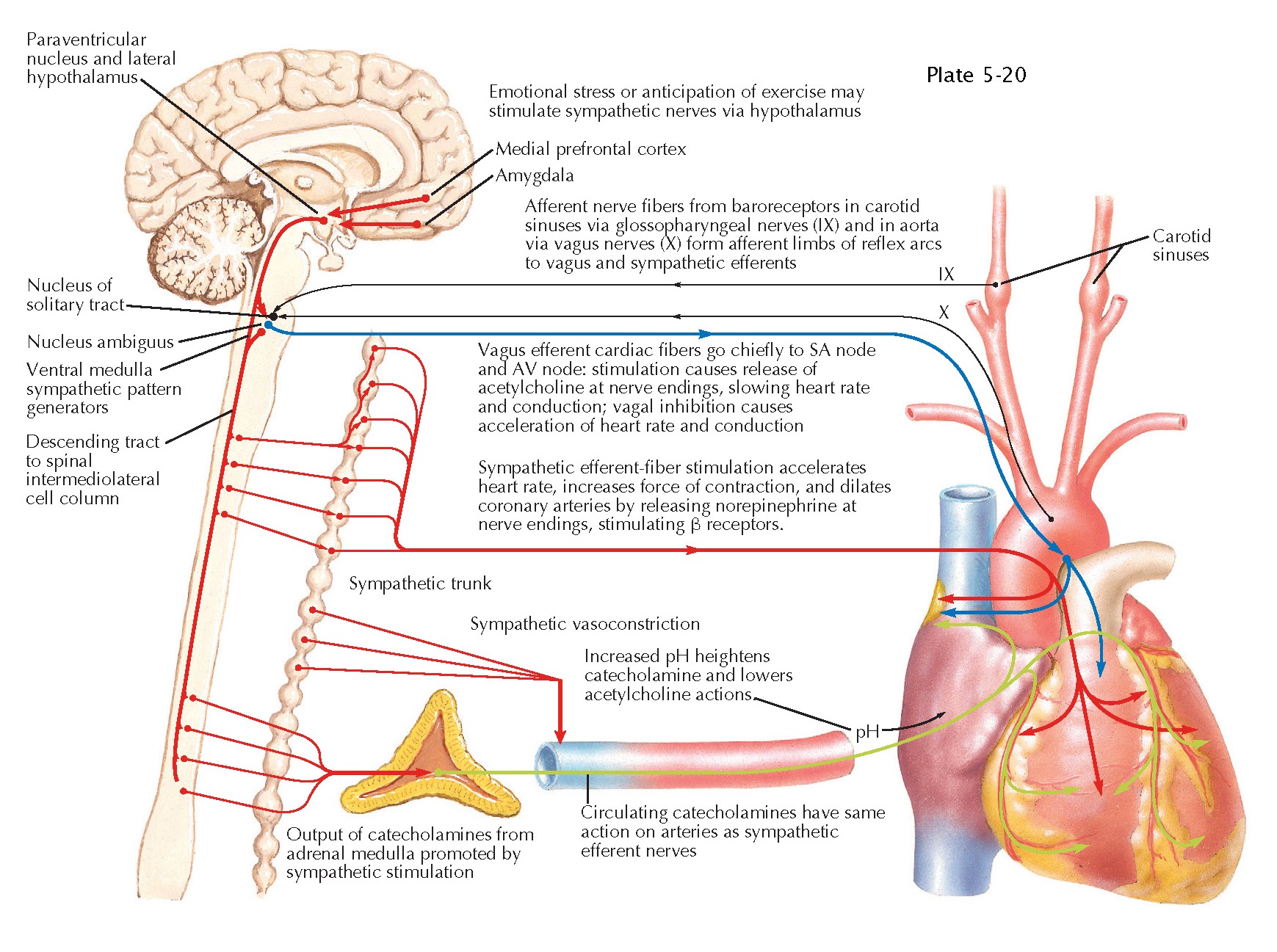 The hypothalamus is a key component of a central nervous system (CNS) network that governs the heart and circulation. Different behaviors, ranging from emotional responses to motor activities, require activation of different components of the cardiovascular control network. Neurons in the cerebral cortex send inputs to the medial prefrontal cortex, particularly the infralimbic cortex, and the amygdala. These send axons to the hypothalamic neurons that govern cardiovascular response, including the paraventricular nucleus and lateral hypothalamic area. The descending hypothalamic axons innervate brainstem sites involved in producing patterns of cardiovascular response, such as the parabrachial nucleus and both ventromedial and ventrolateral medullary reticular formation.

The parabrachial nucleus receives visceral sensory and pain inputs, and organizes patterns of cardiovascular response seen during arousal due to pain, respiratory distress, or gastrointestinal discomfort (increased blood pressure and heart rate). It does this by direct projections to sympathetic and parasympathetic cell bodies, as well as to medullary pattern generators.

In the medulla, there are distinct pattern generators in the ventromedial and ventrolateral areas. The ventromedial medulla receives inputs from hypothalamic cell groups involved in thermoregulation, and it organizes patterns of sympathetic response necessary for thermogenesis (increased heart rate and activation of brown adipose tissue, with shifting of blood flow from cutaneous to deep vascular bed). This also requires elevation of heart rate to deal with the increased cardiac demand of hyperthermia. The ventrolateral medulla, by contrast produces patterns of cardiovascular response necessary for maintaining blood pressure during erect posture, called baroreceptor reflexes.

Other descending hypothalamic axons go directly to the nucleus of the solitary tract, as well as the preganglionic neurons in the nucleus ambiguus in the medulla, which control heart rate through the vagus nerve and the intermediolateral column of the spinal cord, which controls vasoconstriction. These may produce patterns of autonomic activation that are organized at a hypothalamic level, such as stress or starvation responses.

The brainstem targets of this descending system coordinate cardiovascular reflexes. For example, the carotid sinus nerve (a branch of the glossopharyngeal nerve) and the aortic depressor nerve (a branch of the vagus nerve) bring information to the nucleus of the solitary tract about aortic and carotid stretch. When blood pressure is high, neurons in the nucleus of the solitary tract activate cardiovagal neurons in the nucleus ambiguus to slow the heart and inhibit neurons in the ventrolateral medulla that maintain tonic blood pressure by means of activating sympathetic preganglionic vasoconstrictor neurons. This baroreceptor reflex can be modified by descending hypothalamic input so that during times of stress, for example, there can be a simultaneous increase in blood pressure and heart rate without activating the baroreceptor reflex.