Symmetric or asymmetric reduction in the size and weight of the growing fetus in utero, compared with that expected for a fetus of comparable gestational age, constitutes intrauterine growth restriction. This reduced growth may occur for many reasons, but most occurrences represent signs of signiﬁcant risk of fetal death or jeopardy to the fetus. Some authors advocate identifying fetuses with growth between the 10th and 20th percentiles as suffering “diminished” growth and at intermediate risk for complications. Problems of consistent deﬁnition make estimates of the true prevalence of growth restriction difﬁcult, but by most deﬁnitions it occurs in 5% to 10% of pregnancies. 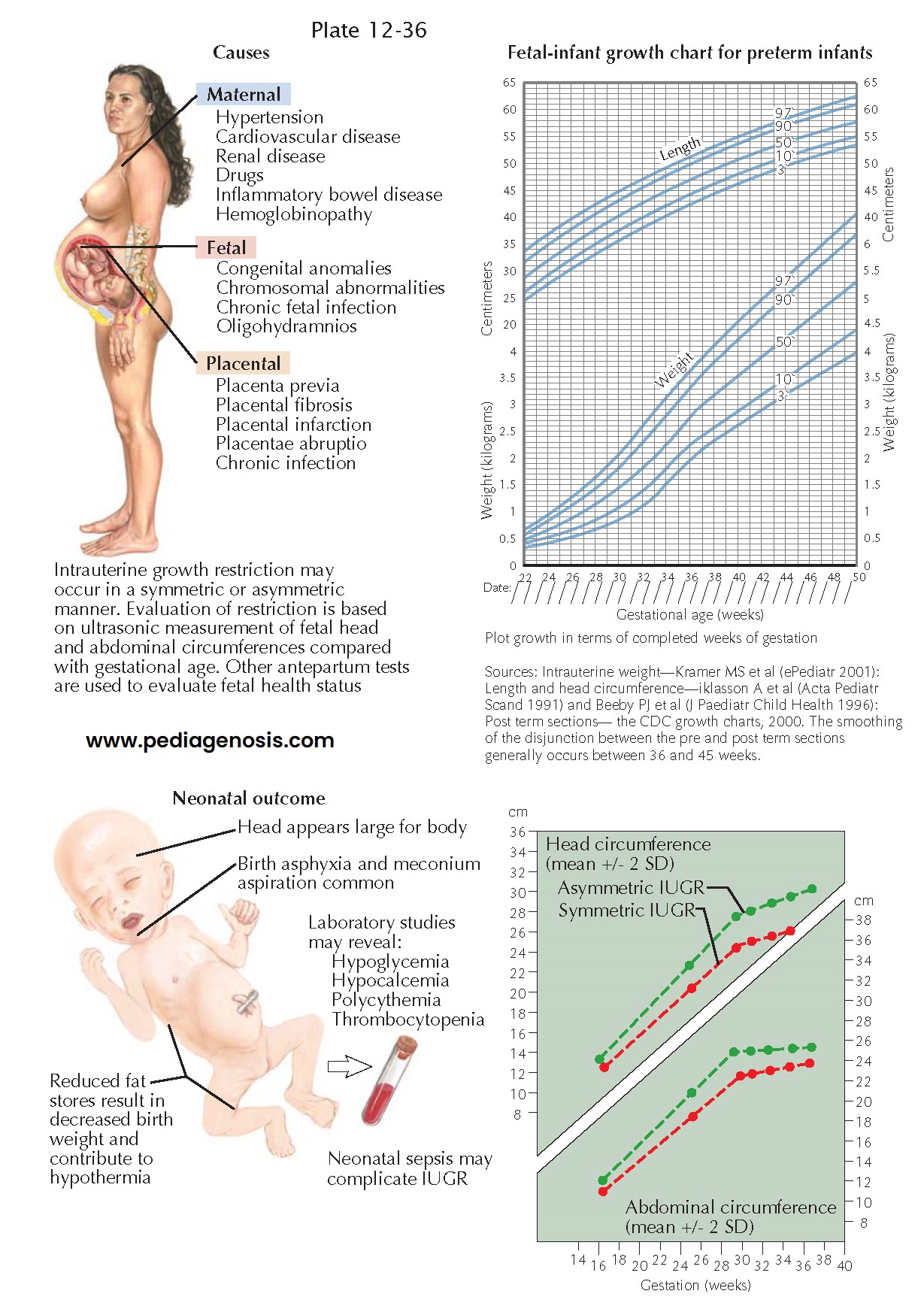 The risk of intrauterine growth restriction increases with the presence of maternal conditions that reduce placental perfusion (hypertension, preeclampsia, drug use, smoking) or those that reduce the nutrients available to the fetus (chronic renal disease, poor nutrition, inﬂammatory bowel disease). Abnormalities of placental implantation or function can result in signiﬁcant reduction in nutrient ﬂow to the fetus. The risk is also higher at the extremes of maternal age: for women less than 15 years old the rate of low birth weight is 13.6% compared with 7.3% for women between 25 and 29 years old. When multiple gestations are excluded, the rate for women older than 45 years is greater than 20%. Multiple pregnancies, especially higher order multiples, are at increased risk for growth restrictions. In most cases of growth restriction, no speciﬁc cause is identiﬁed.

Growth-restricted infants are at risk for progressive deterioration of fetal status and intrauterine fetal demise (twofold increased risk). (There is an 8- to 10-fold increase in the risk of perinatal mortality: growth restriction is the second most important cause of peri- natal morbidity after preterm birth.) Long-term physical and neurologic sequelae are common. The risk of adverse outcome is generally proportional to the severity of growth restriction present.

Overt signs of signiﬁcant fetal growth restriction may be absent until a signiﬁcant reduction in growth has occurred. (Physical examination of the mother may miss up to two-thirds of cases; ultrasonography can exclude or verify growth restriction in 90% and 80% of cases, respectively.) Signs suggestive of growth restriction include a discrepancy between the externally measured size and what would be expected for the gestational age. On ultrasonographic examination, the fetus will show measures of long bone growth or abdominal or head circumference that are discordant with each other or those expected for the anticipated gestational age. Oligohydramnios may also be present. The early establishment of a reliable estimated date of delivery is critical to the accurate detection of a decelerated rate of fetal growth. The most accurate diagnosis will also be based on serial examinations that provide information about the growth of the individual fetus.

When intrauterine growth restriction is suspected or documented, enhanced fetal assessment and antenatal fetal testing (including nonstress testing, biophysical proﬁles, and /or contraction stress tests) should be planned. Doppler velocimetry of the umbilical arteries has been demonstrated to be strongly predictive of fetal death when reversed or absent and diastolic ﬂow occurs in the presence of IUGR. Patients at risk because of maternal disease should have early assessment of fetal growth (biparietal diameter, head circumference, abdominal circumference, and femur length) with frequent remeasurement as the pregnancy progresses. This may need to be done as often as every 2 to 3 weeks in severe cases. Careful feta monitoring during labor is indicated for these infants.