Muscle strains most commonly occur at the musculotendinous junction. Most muscle strain injuries occur as the result of a forceful eccentric muscle contraction. The muscles most commonly involved are those that cross two joints (e.g., hamstrings, gastrocnemius). Another factor that makes certain muscles susceptible to strains is an increased percentage of fast twitch muscle fibers (type II). 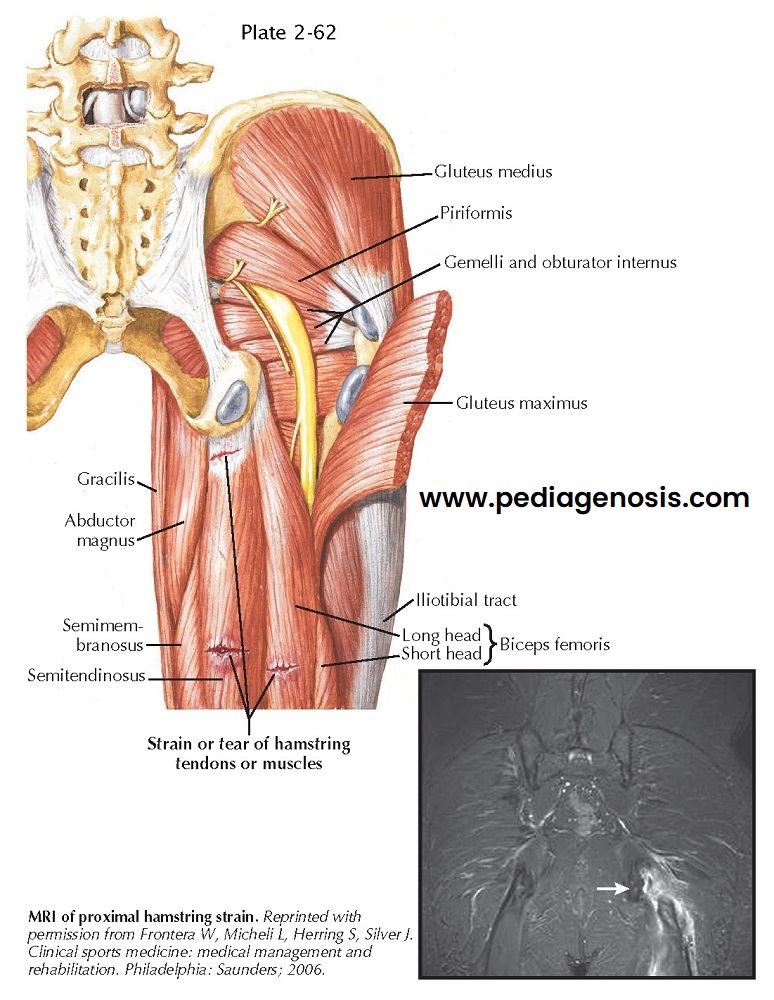 The hamstring musculature (biceps femoris, semitendinosus, and semimembranosus) act to extend the hip and flex the knee. The muscle group can be injured any-where along its course from the ischium to the fibular head (biceps femoris) or medial tibia (semitendinosus, semimembranosus). Patients will often describe a pulling/tearing/ripping sensation of the posterior thigh. The most common inciting event is a change in speed while running during athletic activity.

Examination of patients with a hamstring injury includes inspection for ecchymosis along the posterior thigh. Palpation over the point of maximal tenderness for a defect, especially proximal, should be undertaken. Resisted prone knee flexion strength at varying degrees and the ability to actively extend the hip off of the examination table should be compared.

Imaging for hamstring strains is often not necessary when the injury occurs in the midportion of the posterior thigh. Injuries that occur more proximal warrant plain radiographs and an MRI to evaluate for bony avulsion or soft tissue avulsion of the proximal origin. Treatment of midsubstance or musculotendinous injury is very similar. An initial period of rest, ice, compression, and elevation to quell the acute phase of inflammation, while maintaining the length of the muscle, is initiated. Once these initial symptoms subside, isometric followed by isotonic and isokinetic exercises are progressed until a full return to activity based on symptoms is achieved. Recovery from a hamstring strain may range from 3 weeks to 6 months depending on severity. Treatment of proximal avulsions may be surgical with repair back to the ischial origin.

Proceeding to surgery is guided by factors such as tendon displacement and patient expectations.

Sudden eccentric contraction, most commonly with lateral movement and hyperabduction, is the most common mechanism of injury. Injury events range from slips on a wet floor to those sustained during a sporting activity, commonly soccer, hockey, and basketball. The adductor longus muscle is the most commonly injured muscle-tendon unit.

Examination of patients with adductor strain includes inspection for ecchymosis along the medial thigh and palpation of the adductor origin in the pubic rami. Strength comparison and causation of pain should be examined with the hips and knees fully extended and with both flexed to 45 degrees.

Plain radiographs and an MRI are used to evaluate an avulsion injury or in the case of chronic adductor issues to evaluate for partial tearing.

Groin injuries with rare exception respond to conservative management of activity modification, gradual stretching, and graded return to activities based on symptoms.

The rectus femoris is the most commonly injured muscle of the quadriceps muscle group. It can be injured at any point along its course. As with other strains, musculotendinous injury is most common, although proximal injuries, especially in adolescents, must be evaluated for avulsion of the anterior inferior iliac spine (origin). Eccentric contraction again is the most common mechanism, especially during sprinting. The iliopsoas is less commonly injured in isolation and may be more commonly irritated with snapping iliopsoas and iliopsoas bursitis.

Examination includes inspection for ecchymosis and palpation of the muscle belly, observing for defects. The patient’s range of hip motion is tested with the Thomas test while lying supine and the Ely test lying prone, looking for hip flexion contracture and overall tight-ness. Strength can be tested with the straight-leg raising test (rectus femoris) and upright hip flexion (iliopsoas isolation). A strength comparison and provocation of pain with these tests help determine the cause.

Standard radiographs of the pelvis are commonly obtained to evaluate for anterior inferior iliac spine avulsion as well as for other entities in the differential diagnosis.

The modicum of activity modification and range of motion in a pain-free range, followed by core stabilization and hip flexion strengthening, is standard for hip flexor strains.