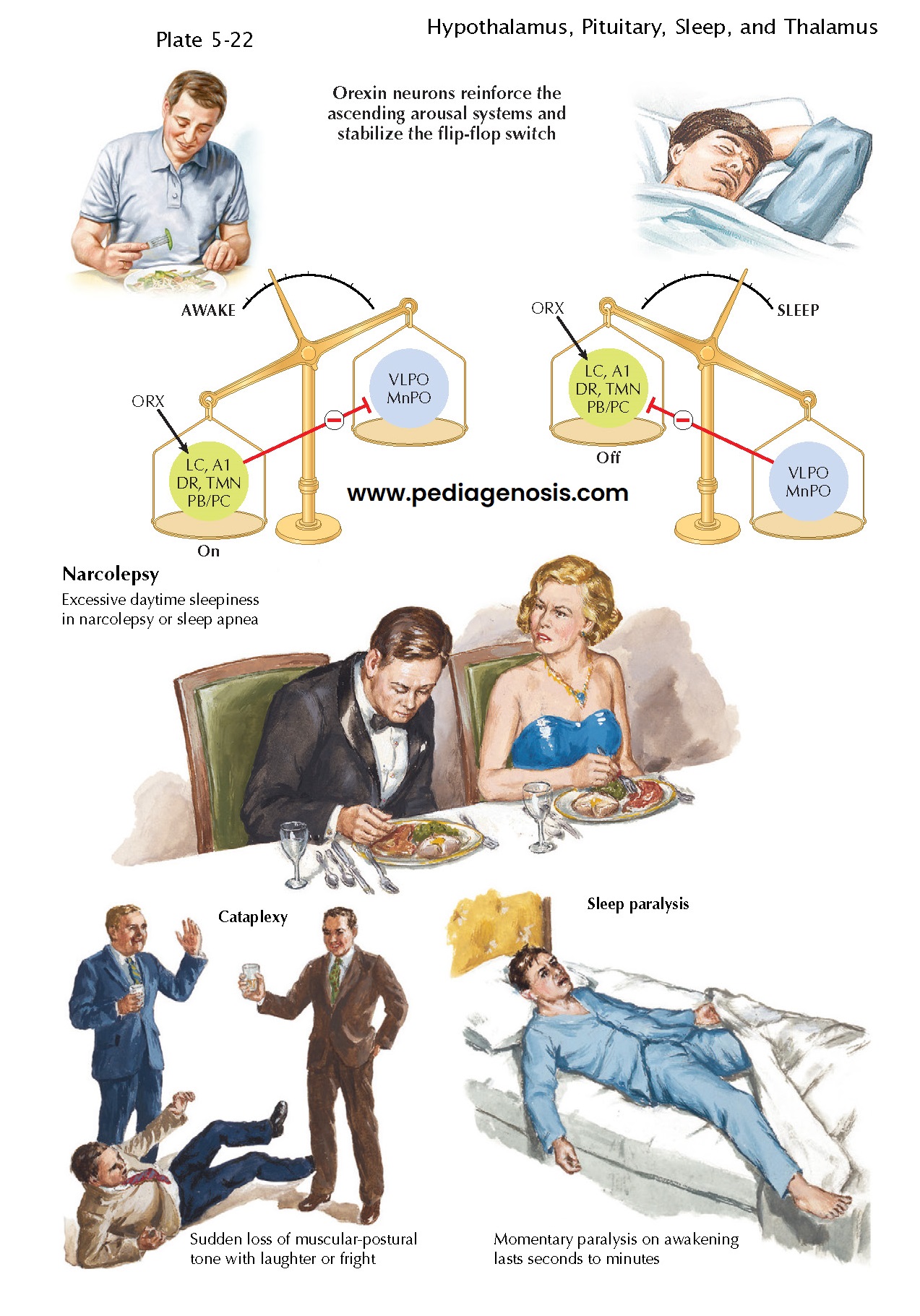 Narcolepsy is a puzzling disorder that was first described in the late 1800s. Patients usually have onset of their symptoms in their teens or twenties, when they become unusually sleepy during the day and may fall asleep if unstimulated even for a brief time. When a friend tells a joke, they may suddenly lose their muscle strength and gradually slide to the floor, unable to stand or even sit, a condition called cataplexy. Narcoleptic patients also may have sleep paralysis when they are just falling asleep or just waking up and be conscious but unable to move, or may have dreams intrude into their waking state as they fall asleep (hypnagogic hallucinations) or wake up (hypnopompic hallucinations). All of these phenomena represent a weakening of the boundaries between different wake-sleep states, particularly with components of REM sleep (muscle atonia, dreaming) intruding on wakefulness.

The cause of narcolepsy was quite mysterious until a new neurotransmitter, orexin (also called hypocretin) was discovered in 1998. The orexin neurons are found in the lateral hypothalamic area. They target the main components of the ascending arousal system, and both of the orexin receptors are excitatory. Orexin neurons fire most rapidly during wakefulness, particularly during wakeful exploration of the environment. Thus the orexin neurons appear to play a key role in maintaining and stabilizing a wakeful state.

Soon after their discovery, it became apparent that gene defects that cause loss of signaling by the orexin neurons could cause narcolepsy in experimental animals.

In humans, however, genetic mutations are a rare cause of narcolepsy; most individuals with narcolepsy appear to have loss of their orexin neurons, perhaps due to autoimmune attack.

The orexin neurons stabilize the behavioral state by reinforcing wakefulness and blocking individuals from falling directly from wakefulness into REM sleep. In the absence of the orexin neurons, the waking state is less stable, and individuals fall asleep too easily. They also enter REM sleep very quickly after sleep onset and can have fragments of REM sleep (dreaming, muscle atonia) occurring at the wrong times, accounting for the episodes of hypnagogic hallucinations, sleep paralysis, and cataplexy.