Overview of Hypothalamic Function and Dysfunction

Overview of Hypothalamic Function and Dysfunction

The hypothalamus works to integrate autonomic, endocrine, and behavioral functions of the brain that subserve basic life functions, such as maintaining fluid and electrolyte balance, feeding and metabolism, body temperature and energy expenditure, cycles of sleep and wakefulness, and a wide range of emergency responses. As a result, the range of disorders that occur when the hypothalamus malfunctions is also very great. 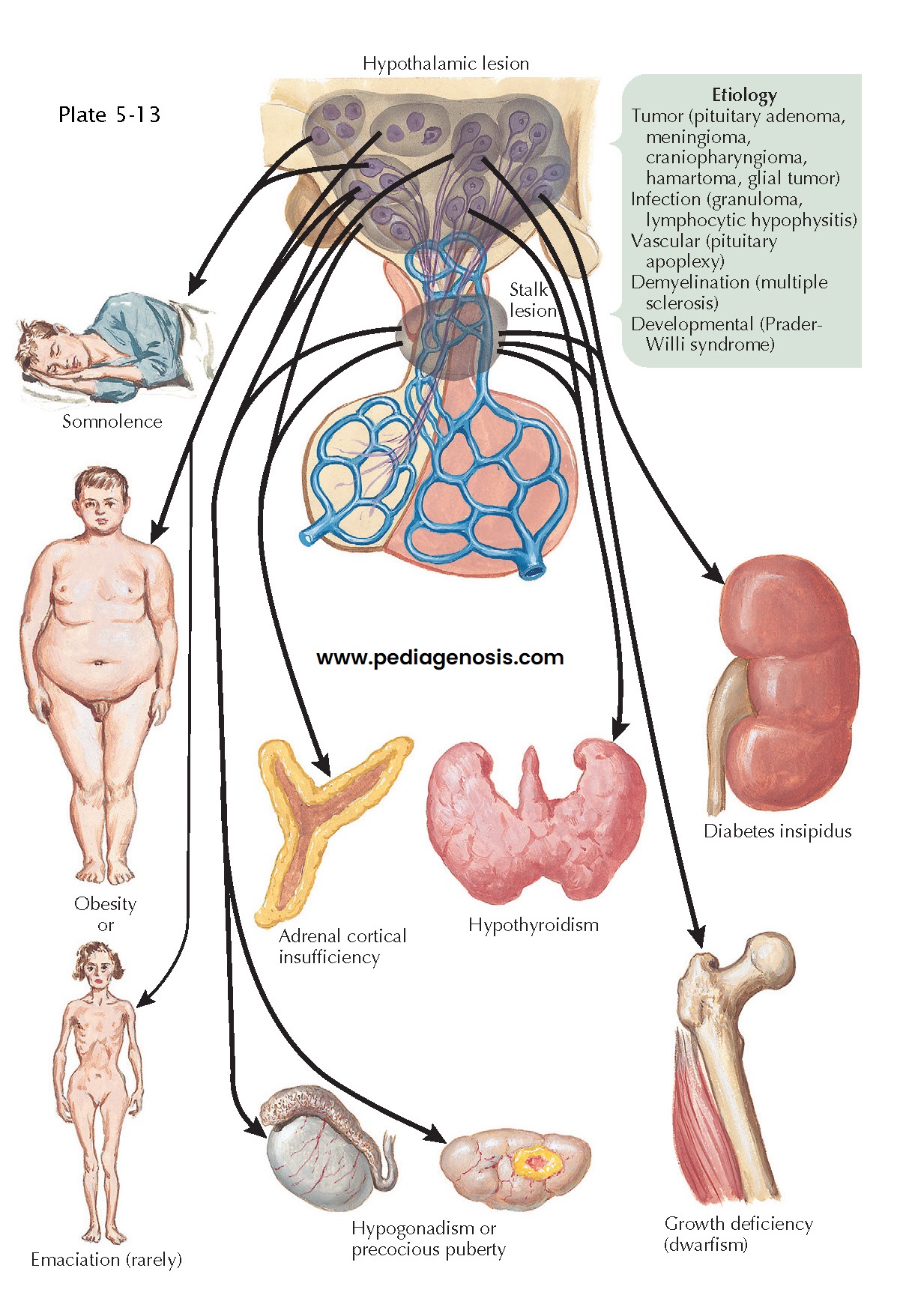 Because the hypothalamus is very small, injuries often involve multiple systems. Hence, a patient with a pituitary tumor or craniopharyngioma impinging on the hypothalamus may have disorders extending into many functions. Such patients are often quite somnolent because an important branch of the ascending arousal system runs through the lateral hypothalamic area. There may also be loss of circadian (24-hour) rhythms of behavior so that the relatively limited waking time may occur during the night rather than in the day.

Alfred Froehlich in 1901 described the patients with such lesions as having an “adiposogenital syndrome” because they became obese and had failure of sexual maturation. Research in the last decade has identified the reason for this association. Feeding in humans (and other animals) is controlled in part by the hormone leptin, which is made by white adipose tissue during times of plenty. In the absence of leptin or its receptors, both humans and animals are ravenous and become quite obese. Leptin is now known to act on the hypothalamus in the region just above the pituitary stalk, to decrease activity in circuits that promote eating. When tumors in the region of the pituitary gland damage this part of the hypothalamus, feeding circuits become dis- inhibited and the patient becomes obese. An adequate nutritional state is also required for the brain to trigger the hormonal changes that accompany puberty. These circuits are also dependent upon leptin to provide a signal that there are sufficient energy stores to make reproduction possible. Patients whose pituitary tumors develop before puberty may fail to go through the tran- sition. Adults who are severely underweight may have regression of sexual organs, accompanied by amenorrhea in women.

The hypothalamic-releasing hormones, in general, are required by the anterior pituitary gland to secrete adequate amounts of growth, thyroid, corticotrophic, and gonadal hormones. In the presence of a pituitary tumor that damages the hypophysial portal bed in the pituitary stalk, secretion of all of these hormones is diminished. On the other hand, prolactin is mainly under inhibitory control by the hypothalamus, primarily through release of dopamine into the portal circulation. Damage to the pituitary stalk thus causes hyperprolactinemia, with galactorrhea (breast milk production) and amenorrhea in women.

Pituitary stalk lesions also sever the axons from the paraventricular and supraoptic nuclei, which release the hormones oxytocin and vasopressin from the posterior pituitary gland. Such patients have diabetes insipidus, with excessive urination, requiring compensatory drinking to avoid volume depletion.

Smaller, focal hypothalamic lesions can sometimes have different results. For example, bilateral lateral hypothalamic lesions, such as multiple sclerosis plaques, have been reported to cause emaciation. Lesions of the preoptic area can cause loss of thirst and loss of ability to increase vasopressin secretion during dehydration. On hot days, such patients may have substantial volume depletion without becoming thirsty.

Hypothalamic lesions in children may also have somewhat different clinical presentations than in adults.

Hypothalamic hamartomas can cause gelastic epilepsy, in which the child laughs uncontrollably but mirthlessly, and sometimes precocious puberty (if the hamartoma includes gonadotropic-releasing hormone neurons). On the other hand, a large hypothalamic lesion in an infant is more likely to present with wasting and emaciation than with obesity, but such children may be quite happy and playful, rather than somnolent.