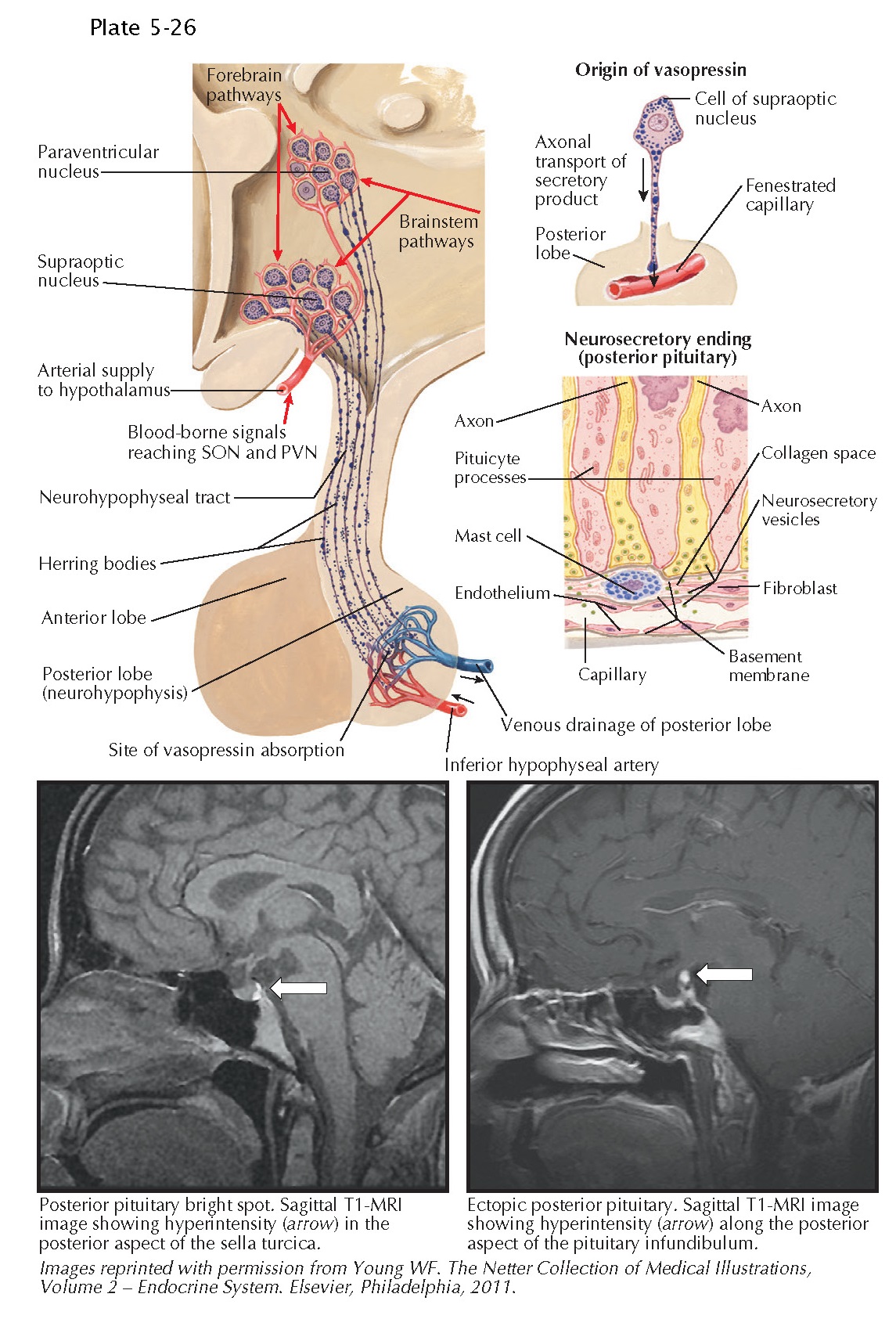 The neurohypophysis, including the neural stalk and the posterior pituitary lobe, is an extension of the hypothalamus. It is embryologically derived from neural ectoderm. During development, magnocellular neurons of the supraoptic and paraventricular hypothalamic nuclei send their axons inferiorly to form the neurohypophysis. These axons terminate in the posterior lobe of the pituitary. In addition, a smaller number of parvocellular neurons from the same nuclei send off shorter axons, which end in the median eminence or infundibular stem. Pituicytes, which are glial cells, support these axon terminals. Two nonapeptide hormones are secreted from distinct axon terminals in the neurohypophysis, including antidiuretic hormone (vasopressin) and oxytocin. After secretion, these hormones enter neurohypophyseal capillaries and are carried via the inferior hypophyseal veins into the systemic circulation.

Oxytocin and antidiuretic hormone (vasopressin) are made by distinct populations of large (magnocellular) neurons in both the paraventricular (PVN) and supraoptic (SON) nuclei, which release the hormones from their axons in the neurohypophysis. The PVN also contains populations of smaller (parvicellular) neuroendocrine neurons that produce corticotropin-releasing hormone, thyrotropin-releasing hormone, or somatostatin, which are released into the hypothalamohypophyseal portal circulation. Some parvicellular neurons in the PVN also make either oxytocin or antidiuretic hormone, which are used as central neurotransmitters to control the autonomic nervous system. Oxytocin and antidiuretic hormone are coded by distinct genes, which code for precursor proteins that undergo posttranslational cleavage into the hormone, a neurophysin protein, and a carboxyterminal peptide called a copeptin. These are transported within secretory granules (vesicles), traveling along neuronal axons until they reach their respective axon terminals, where they are stored until secreted.

Failure of antidiuretic hormone synthesis and secretion is the cause of central diabetes insipidus, which is characterized by passage of large volumes of dilute urine, driving increased thirst. Dehydration and hypernatremia may generally occur if access to water is limited in untreated patients. Although diverse space-occupying lesions in the hypothalamus or within the sella may lead to central diabetes insipidus, it may also be noted that pituitary adenomas only rarely cause this condition preoperatively. The “posterior bright spot” is generally absent on magnetic resonance imaging in patients with central diabetes insipidus.

The release of oxytocin occurs in response to neural inputs during parturition, suckling, and intercourse. Animal data have suggested a role for oxytocin in propagation of labor and milk let-down during suckling. However, women who are deficient in oxytocin may experience normal labor and successful lactation, suggesting that the physiologic role of oxytocin in humans remains incompletely understood. A possible role of oxytocin in behavior is under study. There is also evidence in animals that oxytocin as a central neurotransmitter ay promote maternal behavior and social interaction.