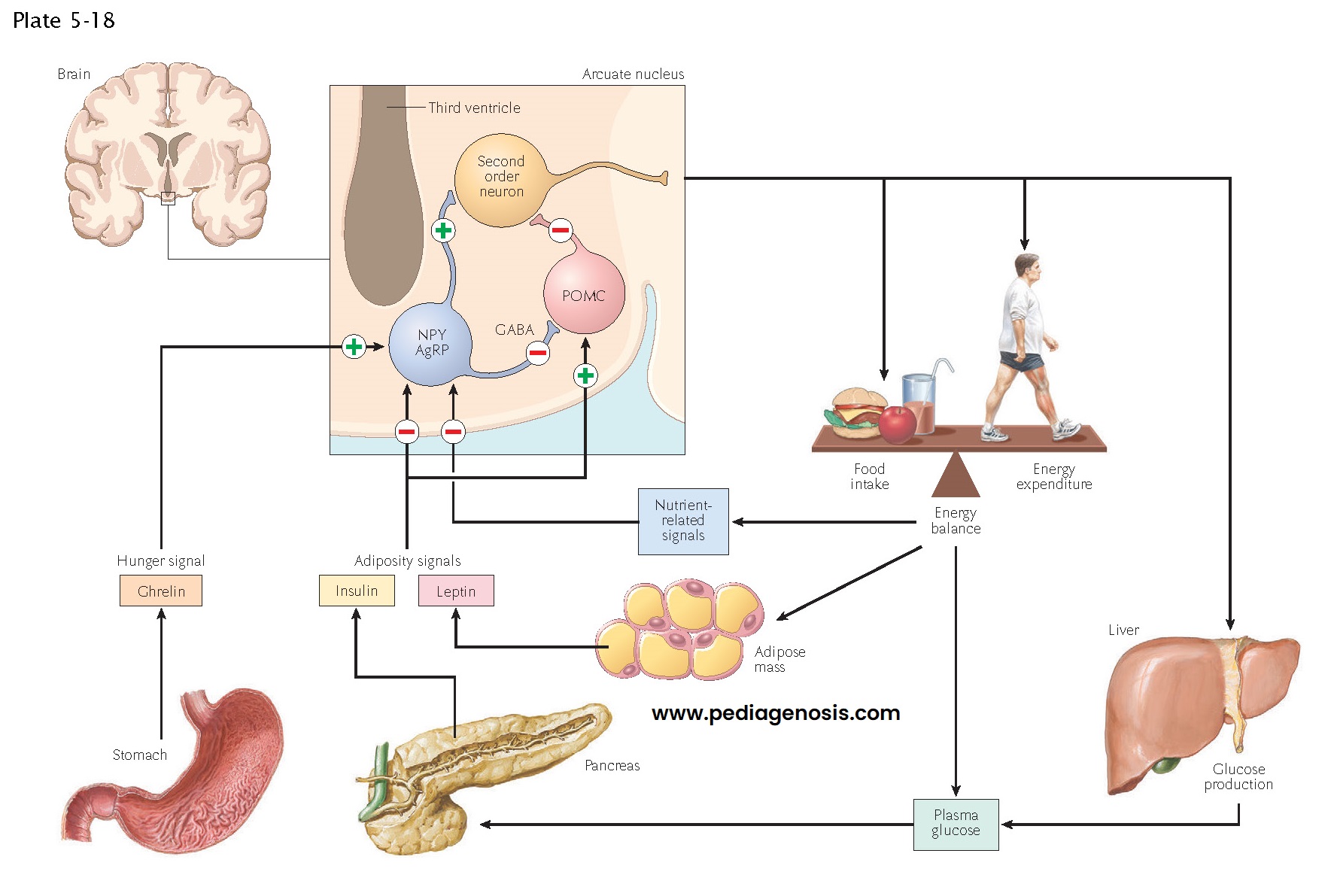 A key function of the hypothalamus is the control of feeding, body weight, and metabolism. Two systemic hormones are known to act on the hypothalamus to ensure that animals ingest sufficient food for their metabolic needs. Ghrelin, a hormone made by the gastric mucosa when the stomach is empty, causes increased eating. Similarly, low levels of leptin, a hormone made by white adipose tissue during times of metabolic plenty, also drive feeding. Hence a starving animal that has low leptin and high ghrelin levels will eat voraciously. Of interest, the opposite does not occur: in the presence of high leptin levels, animals are not inhibited from eating. Throughout evolution, starvation has been a constant problem for animals, but the prospect of obesity due to having too much available food was never a problem until humans recently learned to produce such an overabundance. Hence, humans never evolved ways to deal with this modern situation, and obesity has become rampant in modern human societies.

The actions of leptin and ghrelin appear to involve neurons in the arcuate nucleus, a part of the hypothalamus that is just above the pituitary stalk. These hormones can enter the brain through the hypophysial portal vessels, which lack a blood-brain barrier. Here they encounter neurons that have receptors for the hormones and form a key circuit in controlling eating. Neurons in the arcuate nucleus that contain the peptide neurotransmitters neuropeptide Y (NPY) and agouti-related protein (AgRP) form a positive part of the circuit. They contact cells in the paraventricular, ventromedial, and dorsomedial nuclei of the hypothalamus, as well as the lateral hypothalamic area and parabrachial nucleus, and drive feeding responses. By contrast, a different set of arcuate neurons contains the peptides derived from the pro-opiomelanocortin

(POMC) precursor, including melanocyte–stimulating hormone (α-MSH), β-endorphin, and others. These POMC neurons contact many of the same targets as the NPY/AgRP neurons but use α-MSH and the melanocortin 3 and 4 receptors to inhibit the pathways that promote feeding. NPY neurons also contain γ-aminobutyric acid (GABA), and appear to inhibit the POMC neurons directly as well, while AgRP blocks melanocortin 3 and 4 receptors.

The feeding system also receives other central nervous system (CNS) inputs. For example, there is a strong circadian input to feeding, which is mediated by the pathway from the suprachiasmatic nucleus to the subparaventricular zone and then the dorsomedial nucleus. Dorsomedial hypothalamic neurons, in turn, send outputs to the lateral hypothalamic area and the paraventricular, ventromedial, and arcuate nuclei, which may drive circadian cycles of feeding.

The mechanisms by which hypothalamic neurons promote feeding are not well understood. There do not appear to be any “master neurons” that form a feeding center. Rather, different populations of neurons activate autonomic and behavioral responses that promote feeding. Some of the lateral hypothalamic neurons that are activated during starvation contain the peptide neurotransmitter orexin, and these neurons appear to cause arousal and to drive active exploration of the environment, which is necessary for most animals to acquire food. Other descending pathways may potentiate motor responses, such as sniffing, licking, chewing, and swal-lowing, which are a part of the ingestive behavior. Other descending pathways that control the autonomic nervous system may increase gastric motility and acid production, which ay be perceived by the individual as “hunger pangs.”