Cardiac auscultation is not the only way to examine the cardiovascular system. Peripheral vessels reflect what is occurring in the cardiovascular system; for example, carotid and femoral artery examination can reveal peripheral vascular disease. Bruits over these vessels may indicate carotid stenosis or aortofemoral stenosis. An abdominal bruit may indicate renal artery stenosis. A decrease in blood pressure in either arm suggests subclavian artery stenosis. If the ankle-brachial index (ratio of systolic pressure in arm to systolic pressure in ankle using Doppler technique) is less than 0.9, some peripheral artery disease may be present.

Jugular venous pulsations seen when the patient is lying with the upper body elevated to 30 degrees suggests elevated RA pressure of several causes.

Precordial palpation before auscultation of the heart can help the examiner make the proper cardiac diagnosis. The apical impulse can suggest LV hypertrophy (enlargement) if sustained and slow rising. Palpation along the left sternal border may reveal a parasternal lift, which suggests an elevated right ventricular (RV) pressure of about 40 mm Hg. Plate 2-2 illustrates some examples of carotid pulses and venous pulsations and cardiac apical impulses associated with specific cardiac disease states.

The basic instrument of auscultation is the human ear. Although the stethoscope has technical advantages, it often distorts, decreases, or selectively emphasizes certain vibrations. Frequently, the naked ear is superior to the stethoscope in the detection of low-pitched vibrations (S3, S4) because the ear is a larger collector of sound and fuses auditory with palpatory perception.

In auscultation, various patient positions can be used (see Plate 2-3). The patient may be sitting, supine, lying on the left side, or bent forward to increase the contact of the apex with the chest wall, as preferred for mitral or LV sounds and murmurs. The left side (left decubitus) position accentuates the rumbling murmur of mitral stenosis. The bent-forward position is preferred for aortic diastolic murmurs, whereas the supine position is best for pulmonic and tricuspid murmurs.

The apical area (“mitral” area) is the best location for detecting not only the murmur of mitral stenosis or insufficiency but also the LV or atrial gallops and the aortic component of the second sound (A component of II). The murmurs of aortic stenosis and especially of aortic insufficiency also are often heard well at this location. However, these vibrations are detected over a larger area formed by the entire left ventricle, centering around the apical beat and extending to the fourth and fifth left interspaces medially and to the anterior axillary line laterally. In patients with ventricular enlargement, the sound shifts to either the left or the right.

The “tricuspid” area is renamed the right ventricular area. In addition to the murmurs of tricuspid stenosis and insufficiency, RV and atrial gallops and the murmurs of pulmonary insufficiency and ventricular septal defect can be well heard here. The RV area includes the lower part of the sternum and the fourth and fifth interspaces, 2 to 4 cm to the left and 2 cm to the right of the sternum. This area may extend also to the point of maximal impulse, in the presence of severe RV enlarge- ment; the “apex” in such patients is formed by the right ventricle.

The aortic component of S2 and the murmurs of aortic valve defects are often heard well at the third left interspace (Erb’s area). This point is frequently more revealing than the second right interspace, except in patients with dilatation of the ascending aorta, where the manubrium or the second right interspace may be more informative. The aortic area should designate both the aortic root and part of the ascending aorta. The vibrations heard best in this area include the murmurs caused by aortic stenosis, aortic insufficiency, augmented flow across the aorta or dilatation of the ascending aorta, and abnormalities of the neck arteries, as well as the aortic ejection click and aortic component of S2.

In normal adolescents or young people, S1 may be split. The best area for hearing this split sound is at the third left interspace. This splitting is not influenced by respiration. The loudness of S1 is decreased in myocarditis, myocardial infarction (MI), myocardial fibrosis, hypothyroidism, mitral insufficiency (soft), aortic insufficiency, and pericarditis with effusion. S1 is increased in mitral stenosis, systemic hypertension, and hyperthyroidism.

The third heart sound (S3) may be normal in children, adolescents, and young athletes but may be audible over the LV or RV area in ventricular overload, myocarditis, tachycardia, or heart failure.

The fourth heart sound (S4) is not heard in the normal heart. S4 is audible over the LV area in hypertension, during myocardial ischemia, or when the ventricle is stiff and noncompliant, as in diastolic dysfunction. S4 can also be heard in patients with ventricular volume overload, myocarditis, tachycardia, atrial flutter, and complete or incomplete atrioventricular (A-V) block or obstruction. The fourth sound is then called atrial gallop. A left atrial gallop is frequently heard in aortic stenosis or systemic hypertension. A right atrial gallop is often heard in pulmonary stenosis or pulmonary hypertension. A slightly different type is the summation gallop, caused by the summation of S3 and S4. This is most often seen in patients with tachycardia and grade 1 A-V block. 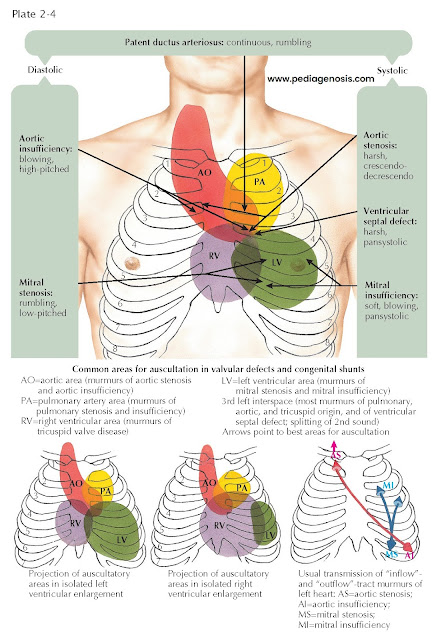 The murmur of A-V valve stenosis is a typical, low-pitched rumble which acquires higher pitch and greater loudness in presystole (presystolic accentuation) if there is sinus rhythm. It is heard best in mitral stenosis in the fourth left intercostal space, halfway between the apex and the sternal border. In tricuspid stenosis this rumble is heard best over the RV area. This murmur becomes louder in inspiration because of increased flow across the tricuspid valve during inspiration.

The stenotic murmur of the semilunar valves is the loudest of all murmurs. It is harsh, starts slightly after S1 with aortic valve opening, and is often preceded by an ejection click, especially if the valve is bicuspid and mobile. The murmur often has a crescendo-decrescendo quality and ends before or with S2, depending on the severity of the stenosis. In aortic stenosis the murmur is maximal in the third left or second right interspace. It is readily heard over the suprasternal area and the carotid arteries and can be heard at the apex. In subvalvular aortic stenosis, it is maximal over the LV area. In pulmonary stenosis the murmur is best heard over the pulmonary area. It radi- ates moderately downward and often can be heard in the back over the lungs.

The murmur caused by a ventricular septal defect is long, harsh, and pansystolic. It is heard best over the RV area.