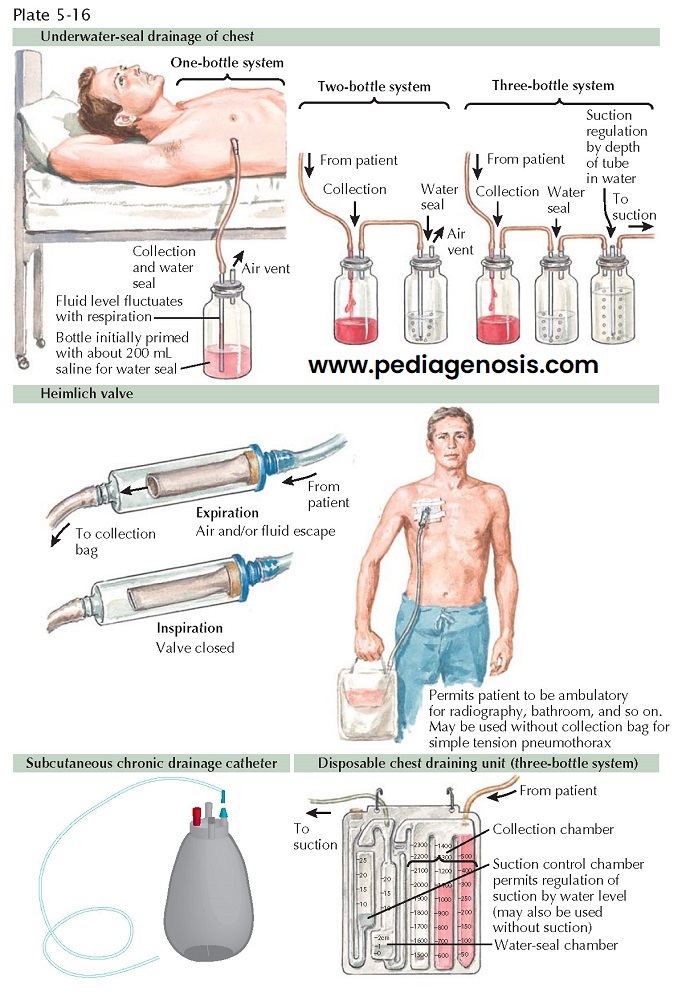 After an intercostal tube has been inserted, the pleural contents are evacuated into a chest drainage system. In the case of a pneumothorax, a one-way ﬂutter valve (i.e., Heimlich valve) can also be used. The essential feature of the system is a means to permit escape of gas or ﬂuid from the pleural space with no possibility of return using gravity or suction.

In recent years, disposable suction systems have become extremely popular, and some manufacturers have miniaturized these systems for true portability. It is important to understand the evolution of the now standard disposable suction systems. Initial drainage systems consisted of one bottle to drain ﬂuid and act as a water-seal chamber. The water-seal chamber acts as a “pop-off” valve, preventing tension pneumothorax by allowing intrapleural air to leave the chest. When there is communication between airway opening (the mouth) and the pleural space, as in the case of a bronchopleural ﬁstula, bubbles can be seen in the water-seal chamber of the chest tube. A drawback of the one-bottle system is that as drainage of ﬂuid persisted, the increasing height of the ﬂuid column increased the resistance for the evacuation of air. The two-bottle system separated the collection bottle from the water-seal bottle. By adding a third bottle, suction to the patient is regulated by the depth of the tube open to the atmosphere under water. As wall suction is increased, the meniscus drops until it reaches the bottom of the tube, and atmospheric air is then entrained. The disposable units incorporate these three bottles into one plastic container. When it is intended that the chest tube be connected to suction, one should always see bubbling in the suction chamber. Again, bubbling in the water-seal chamber indicates an air leak (communication between the airway opening and the pleural space) or a leak in the system. Some new disposable units are “dry,” that is, suction is observed when a ﬂoat is seen in the appropriate window.

If evacuation of ﬂuid or air is impeded, there is a progressive increase in intrapleural pressure and further respiratory and circulatory compromise. This may occur in a number of ways. Soft chest drainage tubing may be occluded by kinking or outside pressure, or it may be of insufﬁcient diameter to drain a large air leak. Dependent loops of tubing outside of the chest may contain ﬂuid and result in signiﬁcant back pressure and accumulation of intrapleural ﬂuid or air. More than one drainage tube may be needed, especially in the case of larger air leaks.

In the case of pleural effusions, or in a patient who has had a recent pleurodesis, the chest tube can usually be removed when there is less than 100 to 200 mL of serous ﬂuid draining in a 24-hour period. Occasionally, serosanguineous ﬂuid may leak through the hole from which a tube has been removed, especially after coughing. This is not of concern because the leak almost always ceases spontaneously. If drainage occurs around a tube that is still in place, it suggests that the tip is no longer in communication with the intrapleural ﬂuid, and needs to be stripped of ﬁbrinous material, ﬂushed with sterile saline, or removed. Infection caused by the presence of a drainage tube in the pleural space is unusual as long as sterile technique was used during insertion.

In certain situations, a tunneled, subcutaneous chest drain may be inserted to provide drainage of effusions for palliation. These devices allow patients to go home and can relieve symptoms of shortness of breath and chest pressure caused by chronic effusions.