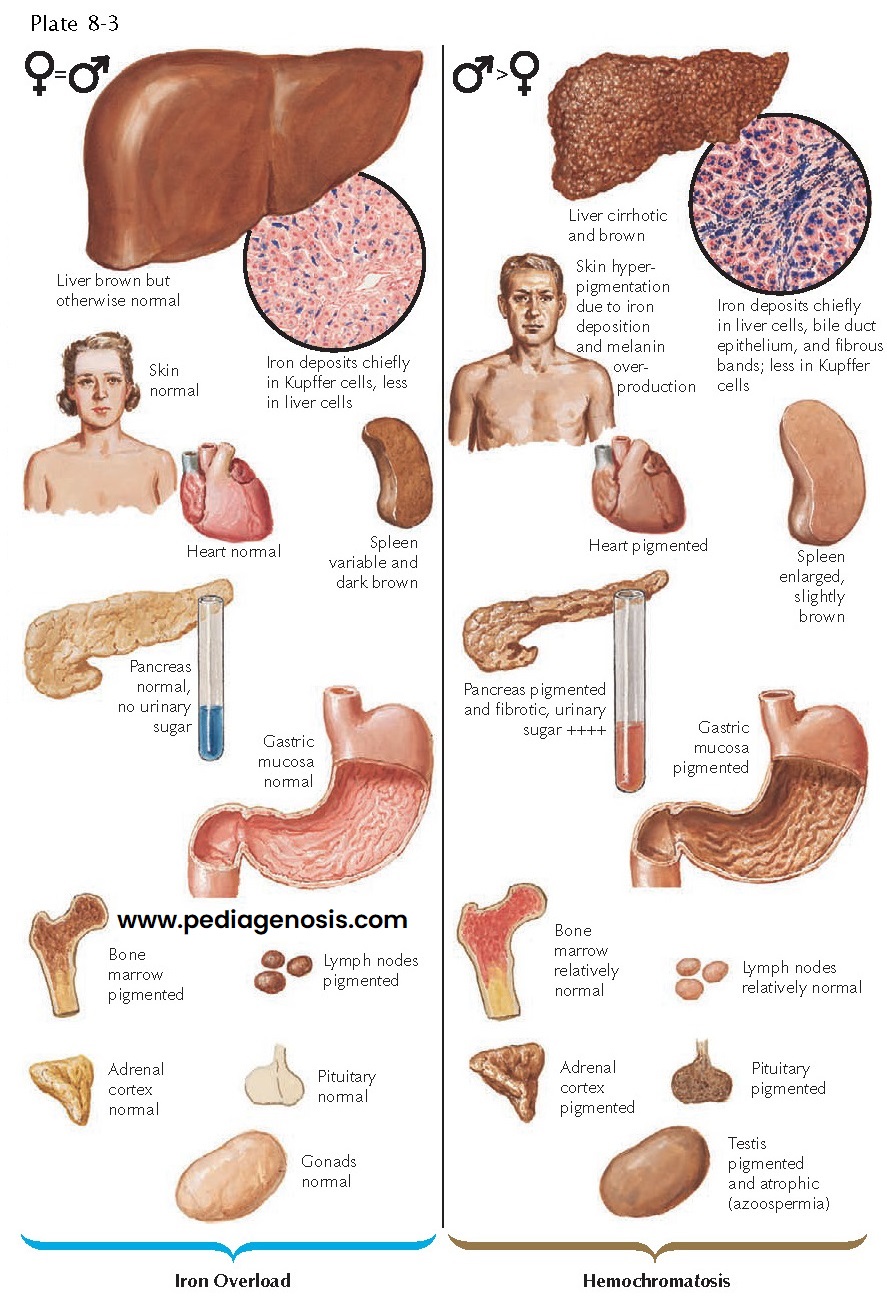 Hemochromatosis is a fairly common autosomal recessive genetic disorder of iron metabolism that leads to excessive iron absorption and eventually iron overload. Iron progressively accumulates in various tissues throughout the body, with the liver most severely affected. Most cases are caused by a genetic mutation in the hemochromatosis gene, HFE. This mutation is carried by approximately 10% of the population. The disease signs and symptoms typically do not appear until after child-bearing age, usually in the sixth or seventh decade of life.

Clinical Findings: Caucasian males are the most frequently affected, and there is variability of carrier rates among populations. For example, in Ireland the rate of homozygosity for the C282Y mutation in HFE is 1 in 85 individuals. The overall incidence worldwide is probably about 1 in 350.

The clinical manifestations of hemochromatosis patients who are homozygous for the mutated HFE gene can be quite variable. Classic hemochromatosis includes three main components: liver cirrhosis, diabetes, and generalized skin pigmentation. These symptoms are caused, respectively, by a persistent chronic accumulation of iron in the liver and in the pancreas and by iron deposition in the skin with increased melanin production. Cirrhosis is the main cause of morbidity and mortality, and it dramatically increases one’s risk for hepatocellular carcinoma.

Cutaneous findings include a generalized bronze discoloration of the skin. This diffuse pigmentation is one of the first signs of the disease. This finding, along with diabetes, has led to the name “bronze diabetes” to describe the condition. Nails can be brittle and show varying degrees of koilonychia. There is widespread generalized hair thinning and loss, affecting all terminal hair locations. Arthritis is a common finding in these patients and can also be seen in asymptomatic heterozygous carriers of the disease.

Histology: Histology of the skin is not useful for diagnosis. Liver biopsies show varying degrees of damage on a spectrum from fibrosis to cirrhosis. The Prussian blue stain is used to accentuate the iron within the hepatocytes and the cells of the biliary tract. There is less iron accumulation in the Kupffer cells, which is the direct opposite of the findings in states of iron overload.

Pathogenesis: The HFE gene is located on the short arm of chromosome 6 and is mutated in this autosomal recessive genetic disorder of iron metabolism. The most frequently encountered genetic mutation is the C282Y mutation. Normal iron regulation is dependent on absorption of iron from dietary sources and normal losses. Regulatory mechanisms allow for equalization of iron absorption to balance the iron losses in normal physiological states. The defect in HFE leads to abnormal regulation of cellular uptake of iron as well as a loss of regulation of ferritin levels. The result of the excessive iron deposition is an increase in free radical oxygen species and their destructive interactions with various tissues. In the liver, this leads to fibrosis and eventually cirrhosis.

Treatment: Therapy requires removal of the excessive iron. This is best accomplished by routine scheduled phlebotomy. Phlebotomy decreases the amount of iron stores and is used to attempt to prevent the progression to cirrhosis. Prevention of cirrhosis is the single best predictor of morbidity and mortality in these patients. The goal in most patients is to keep the hemoglobin in the range of 12 g/dL. Other methods to remove excessive iron include erythrocytapheresis and iron chelation therapy. Erythrocytapheresis is a method by which predominantly red blood cells are removed from the blood while the serum, white blood cells, and platelets are returned to the patient’s bloodstream. Iron chelation therapy with intravenous deferoxamine has been helpful for patients who cannot tolerate blood removal procedures. Methods to try to decrease the absorption of iron from the gastrointestinal tract can also be attempted. These treatments have shown the best results if implemented before evidence of cirrhosis is present. The importance of genetic counselling cannot be overemphasized.