The adaptive immune response has two arms, the humoral arm (antibody-mediated) and the cellular arm (principally mediated by cytotoxic T cells [TC], which express the molecule CD8). At the centre of both arms are T helper cells (TH), which express CD4. 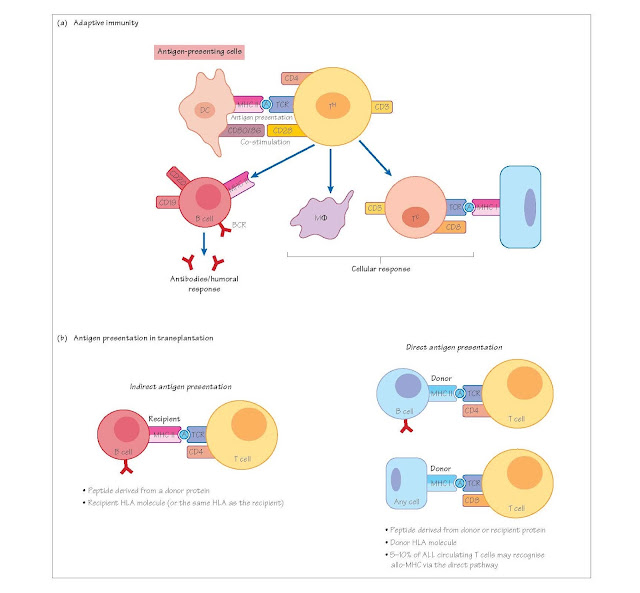 CD4 T cells can be activated only when they ‘see’ peptide antigen displayed in the groove of a specific family of glycoproteins, the major histocompatibility complex (MHC) class II molecules (also known as human leucocyte antigens [HLAs]). Each CD4 T cell has a unique T cell receptor (TCR), which allows it to recognise a specific peptide-MHC II complex, and CD4 acts as a co-receptor to stabilise the interaction between TCR and MHC. The expression of MHC class II molecules is limited to three main cell types, which are known as professional APCs:
1   Dendritic cells (DCs)
2   B cells
3   Macrophages (less efficient APCs).
These APCs have the ability to internalise protein antigens present outside of the cell. APCs have different sorts of receptors, which allow them to internalise antigen. B cells bind antigen via their B cell receptor (BCR), which is specific for that particular antigen. In contrast, DCs and macrophages internalise molecules via a number of receptors that are not antigen-specific, for example FcγRs or complement receptors. They can also internalise antigen via endocytosis.
Once internalised, these antigens are then processed within intracellular compartments (endosomes or lysosomes) and degraded into peptides. The endosome fuses with an exosome containing MHC class II molecules (derived from the golgi body of the cell). Peptides are subsequently loaded into the groove of specific class II molecules into which they specifically fit. Peptide- loaded class II molecules are then transported to the surface of the cell where they are accessible to CD4 T cells.
In addition to presenting antigen to CD4 T cells, APCs also provide co-stimulatory signals to allow full activation (see Chapter 9). This involves the interaction of pairs of molecules, one found on the surface of the T cell and the other on the APC.
Once a CD4 T cell is activated, it may provide help to B cells through the production of cytokines (principally IL-4) and through contact-dependent signals, initiating a humoral response. Thus, the interaction between a B cell and a T cell is a two-way process of mutual help and activation. Alternatively, CD4 T cells may provide help to CD8 T cells and macrophages via the production of a different set of cytokines (principally interferon-γ), initiating a cellular response.
CD8 T cells can only be activated when they ‘see’ peptide antigen displayed in the groove of an MHC class I molecule. Each CD8 T cell has a unique TCR, which allows it to recognise a specific peptide-MHC I complex. Almost all cell types express MHC class I molecules. In contrast to MHC class II molecules, the anti- gens displayed on class I molecules are not obtained from outside the cell, but rather from the cytoplasm of the cell. Thus, in the case of a viral infection, viral antigen samples from the cytoplasm will be processed, loaded onto class I molecules and sent to the surface of the cell to allow detection by CD8 T cells.