Humoral And Cellular Immunity
Humoral (antibody-mediated) immunity
Antibodies (also known as immunoglobulins, Ig) are produced by terminally differentiated B cells, known as plasma cells. Antibody responses to protein antigens require T cell help (T-dependent antigens). The production of antibodies to carbohydrate antigens (e.g. the polysaccharide capsule surrounding some bacteria) occurs in the marginal zone of the spleen, and does not require T cell help (T-independent responses). In transplantation, T-dependent responses are the most important and occur via the following steps. (1.) B cells recognise antigen via their surface B cell receptor (BCR), a membrane-bound IgM antibody molecule.
BCR-bound antigen is internalised, processed and presented on the surface of the B cell in the groove of class II major histocompatibility (MHC) molecules, also known as human leucocyte antigens (HLA). The antigen is presented to a ‘cognate’ T cell, i.e. one that has a cell surface receptor (the T cell receptor [TCR]), which recognises the same antigen in the context of that particular MHC molecule. As the B cell presents antigen, it also provides a co-stimulatory signal to the T cell. This occurs by the interaction of pairs of molecules found on the surface of B and T cells (e.g. CD86 on B cells and CD28 on T cells). The T cell in turn provides help to the B cell, including the provision of the cytokine interleukin (IL)-4. (2.) Following the receipt of T cell help, some B cells proliferate and form short-lived plasmablasts, which produce large quantities of low-affinity antibody. (3.) Other B cells move into B cell follicles in lymphoid tissue and subsequently undergo class switching (they begin to express IgG or IgE rather than IgM) and affinity maturation in the germinal centre. Affinity maturation involves the introduction of mutations into the genes encoding the variable (antigen-binding) region of the antibody (somatic hypermutation) to generate a BCR with higher affinity for antigen. (4.) Following affinity maturation in the germinal centre, some B cells become ‘memory’ B cells (characterised by surface expression of CD27). They continually circulate through the secondary lymphoid organs and if the individual is re-challenged with an antigen, these memory B cells obtain cognate T cell help and rapidly proliferate to produce large quantities of low-affinity antibody. Other germinal centre B cells form short-lived plasmablasts, producing a temporary burst of antibody. A minority of plasma cells migrate from the spleen and lymph nodes to niches within bone marrow. (5.) Bone marrow plasma cells are long-lived and reside in their niches for prolonged periods (probably decades or even the entire lifespan of the human). These plasma cells do not proliferate (and are therefore difficult to target therapeutically), but exist as ‘protein factories’ producing serum IgG.

Antibodies (or immunoglobulins) are comprised of a heavy chain and a light chain, and the former determines the antibody class, for example, IgG antibodies have a γ heavy chain. Immunoglobulins have a variable antigen-binding F(ab)2 region and an Fc region responsible for mediating many effector functions of antibody via complement activation and Fc receptor binding. Antibodies mediate their effector function by directly neutralising pathogen-related toxins, opsonising pathogens for uptake by Fc receptors or flagging cells for antibody-dependent cellular cytotoxicity (ADCC). 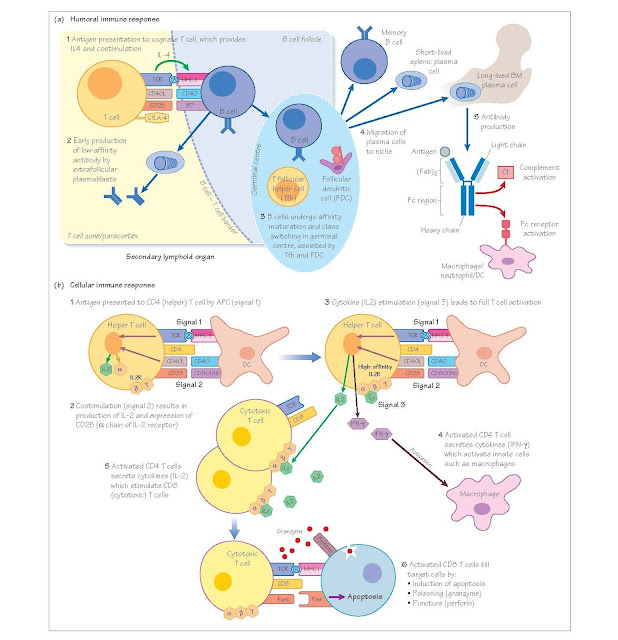 Cellular immunity
The effector function of the cellular immune response is principally mediated by cytotoxic (CD8) T cells. As their name suggests, they are professional cell killers that can poison cells (by secretion of granzyme), punch holes in the cell membrane (using perforin) or induce the cell to commit suicide (apoptosis) via the Fas-FasL pathway. CD8 T cells have TCRs that recognise peptides processed from intracellular proteins (e.g. viral proteins) and presented on the surface in the groove of MHC class I molecules. In addition, cytokine help for CD8 T cells is provided by CD4 T cells, in the form of IL-2. In order for CD4 T cells to be activated, they must have antigen presented to them on MHC class II molecules by APCs (see Chapter 8), which is recognised by the TCR (signal 1). A co-stimulatory signal is also required (signal 2). APCs up-regulate expression of co-stimulatory molecules when they detect a danger signal, for example a pathogen-associated molecular pattern (PAMP). If signal 1 is received in the absence of signal 2, then the T cell will become anergic or will undergo apoptosis. This acts as a means of guarding against activating CD4 T cells against self-antigens. If both signals 1 and 2 are received then the CD4 T cell will up-regulate expression of CD25 (the α-chain of the IL2 receptor [IL2R]), converting it from its low-affinity dimeric form to a high-affinity trimeric form, which avidly binds IL2 providing a further activation signal to the T cell (signal 3). The CD4 T cell will then proliferate, synthesise IL-2 (stimulating self-activation and the activation of CD8 T cells) and begin to orchestrate a powerful adaptive immune response. Following this process, some CD4 and CD8 T cells become memory cells, and can be more readily activated following subsequent exposure to the same antigen.
CD4 T cells can also provide help to activate macrophages through the production of cytokines such as interferon-γ (IFN- γ). In response to IFN- γ, macrophages (and dendritic cells) produce IL12, which further drives the production of IFN- γ by T cells. Helper T cells programmed or polarised to produce IL-2 and IFN- γ are known as Th1 cells, and this lineage is characterised by the expression of the transcription factor Tbet. Those producing IL4 and promoting humoral immunity are known as Th2 cells, and are characterised by expression of GATA3. More recently, CD4 T cells that produce IL17 have been described (Th17 cells). IL17 plays a pathogenic role in a number of autoimmune diseases, although its role in transplant rejection is less clear.

Regulatory immune cells
Some T and B cells have the capacity to inhibit immune activation and play an important role in limiting pathogenic autoimmune responses. Regulatory T cells are characterised by the expression of the transcription factor foxp3 and have high surface expression of CD4 and CD25. They mediate suppression principally through the production of transforming growth factor (TGF)-β and IL10. Regulatory B cells are CD19+, CD24 high and CD38 high, and they mediate immune suppression by production of IL-10. These cells may potentially play an important role in the induction of transplant tolerance.