Tissue Typing And HLA Matching
Tissue typing of transplant recipients is required to assess their immunological profile in order to find an optimally matched organ. This involves identifying their ABO blood group, and determining which human leucocyte antigens (HLAs) their cells express. These tests are performed as part of the transplant assessment process, well in advance of the actual transplant. 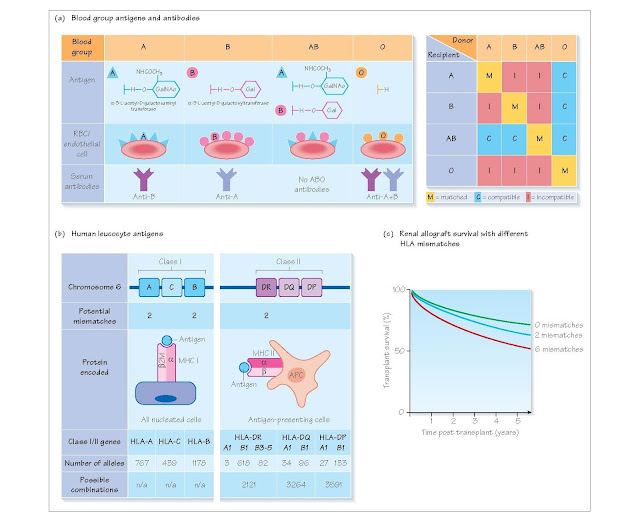 ABO antigens
ABO antigens are carbohydrate molecules found on the surface of red blood cells and endothelial cells. Group O individuals (who lack A and B antigens) develop antibodies to both A and B anti- gens. This is thought to be driven by cross-reactivity with microbial antigens. In group A individuals, B antibodies are present, while group B individuals have A antibodies. AB individuals have no A or B antibodies. Transplantation of an organ into an ABO-incompatible recipient, e.g. an organ from a group A donor into a group O recipient, would lead to immediate binding of A antibodies to graft endothelium, and to hyperacute rejection. Thus, the first step of tissue typing is to ascertain the recipient’s blood group so that an ABO-compatible donor can
be selected. There are two methods used to perform ABO typing.
1   Forward typing – the recipient’s erythrocytes are mixed with anti-A or anti-B serum. If the erythrocytes express A antigens, then agglutination of the cells will occur when incubated with anti-A serum, etc.
2   Reverse typing – the recipient’s serum is mixed with erythrocytes of known ABO type. This test is used to confirm the results of forward typing. It can also be used to determine the quantity of ABO antibodies present by performing serial dilutions of the recipient’s serum prior to incubation with erythrocytes. The ABO titre gives a measure of the concentration of ABO antibodies, and is quantified as the final dilution at which agglutination takes place,
e.g. 1 in 32. The latter test is used in preparation for ABO-incompatible transplantation to assess the requirement for antibody removal during desensitisation (see Chapter 12).

HLA antigens
The human leucocyte antigens (HLA), also known as the major histocompatibility complex (MHC) molecules, are a family of highly polymorphic glycoproteins found on the surface of cells. They are divided into class I and class II molecules. Class I molecules are found on the surface of all nucleated cells and are composed of a polymorphic α chain combined with an invariant subunit (β2 microglobulin). Intracellular protein antigens are processed and presented on class I molecules to CD8 T cells (see Chapter 8). Class II molecules are found only on the surface of antigen-presenting cells (APCs) and are composed of two highly polymorphic subunits, an α-chain and a β-chain. APCs internalise extracellular antigens, process them and load peptides onto class II molecules for presentation to CD4 T cells (see Chapters 8 and 9).
HLAs are encoded by a cluster of genes on chromosome 6. In humans, there are 3 HLA class I genes (A, B and C). These genes are extremely variable, and encode highly polymorphic α-chains. More than 700 variants of the A gene, 1000 variants of the B gene and 400 variants of the C gene have been identified. This variation makes it unlikely that an unrelated donor and recipient will have exactly the same HLA antigen on the surface of their cells. Such extensive genetic variability is unusual in the human genome and is thought to have arisen as a strategy to prevent a single viral mutation (which might prevent viral peptide being loaded onto class I molecules) from conferring virulence against all humans, as there would likely be a class I variant in some individuals in the population which could present the mutated viral peptide.
The HLA class II genes (DP, DQ and DR) are also found on chromosome 6, and are more complex than the class I genes.
HLA-DP is encoded by a polymorphic α-chain gene (HLA- DPA1; >25 different alleles described) and a polymorphic β-chain (HLA-DPB1; >130 alleles described).
HLA-DQ is encoded by a polymorphic α-chain gene (HLA- DQA1; >30 alleles described) and a polymorphic β-chain (HLA- DQB1; >90 alleles described).
HLA-DR is encoded by a polymorphic α-chain gene (HLA- DRA; three alleles described) and four highly polymorphic β- chain genes (HLA-DRB1, B3, B4 and B5; >600 variants described). The DRB1 gene encodes the β-chain of the classical DR class II molecule. The most commonly observed DR antigen in UK donors (arising from variants of the DRB1-β and DRα genes) is the DR4 antigen (present in 35% of donors). The DRB3, 4 and 5 genes also encode β-chains that can complex with the DR α- chain, and give rise to the HLA-DR52, 53 and 51 antigens respectively.

HLA nomenclature
Two parallel systems of nomenclature are applied to HLA antigens.
1      Serological – this was the initial system used to name HLA antigens based on their reactivity to standardised antisera. In transplantation, 55 HLA-A, B and DR antigens are defined based on reactivity to a set of broad antisera. Some of these antigens can be subdivided using more specific antisera (e.g. HLA-A10 can be split into HLA-A25(10) and HLA-A26(10)).
2      DNA sequence – advances in molecular biology have allowed the specific sequences of different HLA genes to be determined. Allele names are prefixed with a ‘*’; for example, the alleles encod- ing the HLA-A3 antigen are named A*03. Different A3 alleles are then given different numbers, e.g. A*0301, A*0302, etc.
In clinical practice in solid organ transplantation, HLA type is now determined by DNA sequencing.

HLA matching
Given that an individual has two copies of each HLA gene, the maximum number of mismatches that can occur between a donor and recipient is 12, i.e. two A mismatches, two B mismatches, etc. However, in renal transplantation only A, B and DR mismatches are considered, so the maximum number of mismatches possible is six. Such a mismatch would be described as a 2-2-2 mismatch (2 A, 2 B and 2 DR mismatches). The best mismatch would be a 0-0-0 mismatch. The more mismatches that are present, the more likely that the allograft will be recognised as foreign and rejected. This is reflected in allograft survival data which suggest that 80% of those patients receiving a 0-0-0 mismatched kidney will still have a functioning allograft at 5 years compared with 60% of those receiving a 2-2-2 mismatched kidney. DR mismatches are more significant than A or B mismatches, therefore every effort is made id DR mismatches.