pediagenosis    October 19, 2020    AnatomyPhysiology , PelvisPerineum    Comment
Rectum Anatomy and Physiology
The rectum is the distal portion of the large intestine and lies in the posterior part of the pelvic cavity. It is continuous with the sigmoid colon at the rectosigmoid junction in front of the third piece of the sacrum (Fig. 5.7), where there is often an acute angulation. The rectum curves downwards and forwards, lying first on the anterior surface of the sacrum and then on the upper surface of the pelvic floor. It deviates to either side of the midline and these lateral flexures become pronounced when the organ is distended. The lowest part of the rectum, the ampulla, is its most dilatable portion. Turning abruptly downwards and backwards, the rectum pierces the pelvic floor and terminates at the anorectal junction, where it is continuous with the anal canal (Fig. 5.5). The sharp angulations at the anorectal and rectosigmoid junctions must be navigated with care during endoscopy. 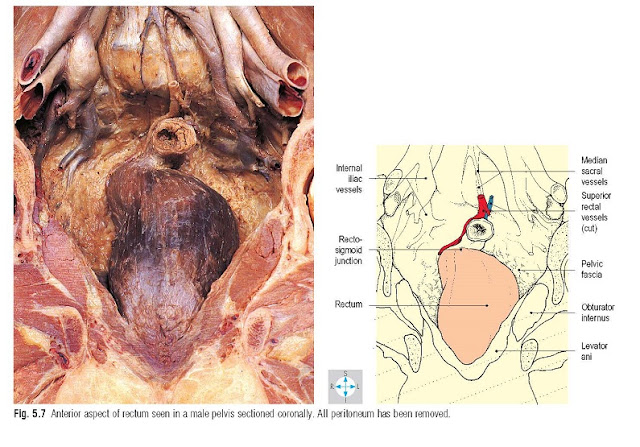 Unlike the colon, the rectum is devoid of appendices epiploicae and has no taeniae, the longitudinal muscle being distributed uniformly around its circumference. The mucous membrane projects into the rectal lumen as three shelves, which form the horizontal folds. 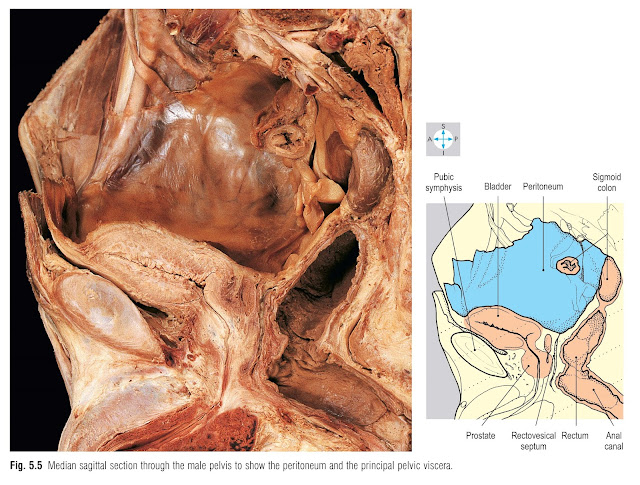 Relations
The upper two-thirds of the rectum are related to the most inferior portion of the peritoneal cavity. The upper third of the organ is covered anteriorly and on both sides by peritoneum, while the middle third, lying behind the rectouterine or rectovesical pouch, has peritoneum only on its anterior surface.
Posterior to the upper part of the rectum are the sacrum, coccyx and the piriformis muscles, while its lower part rests on the levatorani muscles. Descending behind the organ are the superior rectal vessels (Fig. 5.7), the hypogastric plexus of autonomic nerves and, on each side of the midline, the sympathetic trunk and sacral plexus. Lateral to the rectum lie the pelvic plexuses of autonomic nerves and the ureters.
Anterior to the upper portion of the rectum lie those parts of the sigmoid colon and ileum that descend into the pelvic cavity. The anterior relations of the rectal ampulla are of clinical interest because they may be palpated on rectal examination. In the male, these are the prostate (Fig. 5.5), the base of the bladder, the seminal vesicles and ampullae of the ductus. These structures are separated from the rectum by the rectovesical septum. In the female, the rectal ampulla lies adjacent to the vagina. Therefore, rectal examination permits palpation of the cervix of the uterus.

Blood supply
The arterial supply to the rectum is derived principally from the superior rectal artery (Fig. 5.7), the continuation of the inferior mesenteric artery (p. 182). This supply may be supplemented by middle rectal branches from the internal iliac arteries. Venous blood drains into the portal venous system via the superior rectal vein and its continuation, the inferior mesenteric vein. In addition, middle rectal veins drain into the internal iliac veins. As the superior and middle rectal veins interconnect, the wall of the rectum is a site of portacaval anastomosis (p. 185).