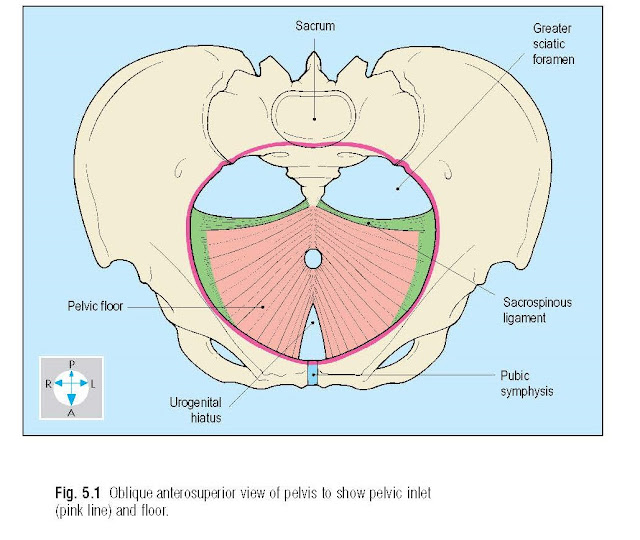 The organs in the pelvis include the bladder and lower ureters, the rectum and possibly coils of small intestine and the sigmoid colon. The male pelvis also contains the prostate (inferior to the bladder) and seminal vesicles (posterior to the bladder) and parts of the ductus deferentes (Fig. 5.5). In the female, the reproductive organs are interposed between the bladder and rectum and include the vagina, the uterus, uterine tubes and ovaries (Fig. 5.6). In the infant, the pelvic cavity is comparatively shallow and therefore parts of the bladder and uterus may lie above the pelvic brim. In the adult, however, the bladder and uterus often lie below the pelvic inlet (brim), though they rise into the abdomen when distended with urine or enlarged by pregnancy.
The peritoneum of the greater sac covers the superior parts of the pelvic organs. In the male it dips into a single pouch between the bladder and rectum while in the female it forms two deeper pouches, anterior and posterior to the uterus. The peritoneum that drapes over each uterine tube is called the broad ligament and the ovary attaches to its posterior aspect (Fig. 5.8).
The arterial supply to most of the pelvic organs is provided by the internal iliac artery (Fig. 5.2), but the rectum and ovaries are supplied by the inferior mesenteric artery and the ovarian arteries, respectively, from the abdominal aorta. Similarly, most venous blood passes to the internal iliac veins but the rectum drains to the portal venous system via the inferior mesenteric vein, while the ovarian veins enter the inferior vena cava and left renal vein. Much of the lymph from the pelvic organs passes to the internal iliac nodes, but the rectum and ovaries drain to aortic nodes in the abdomen.
Many of the nerves in the pelvis, including the sacral plexuses, are applied to the pelvic walls and are merely in transit to the lower limb. The pelvic organs themselves receive autonomic innervation via the left and right pelvic plexuses, which surround the branches of the internal iliac arteries. The parasympathetic contribution to these plexuses comes from the pelvic splanchnic nerves, branches of the second, third and fourth sacral spinal nerves, while the sympathetic innervation is provided by the hypogastric plexus, which descends from around the aortic bifurcation.
The gutter-shaped pelvic floor is formed largely by the left and right levatorani muscles. They arise from the pelvic wall, chiefly from the fascia covering the obturator internus muscles, slope downwards and fuse in the midline. There is a narrow midline gap near the pubic symphysis traversed by the urethra and vagina. The central part of the pelvic floor is pierced by the rectum, turning downwards and backwards to become the anal canal. 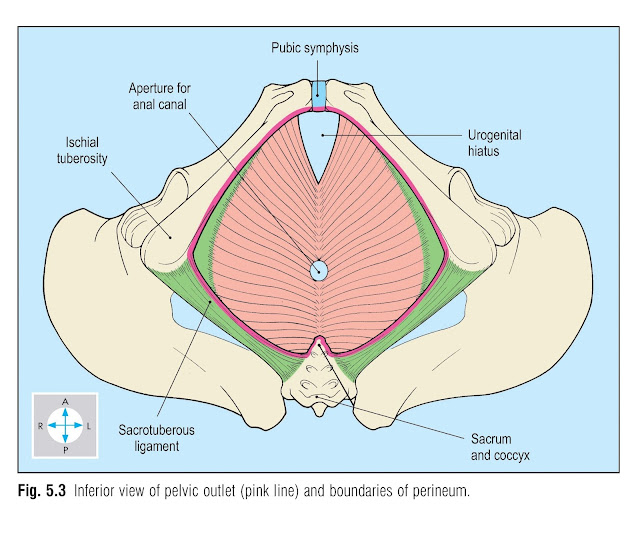 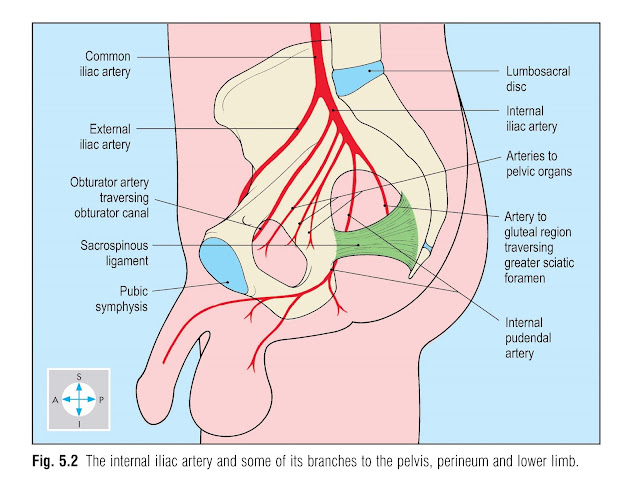