Steroid Hormone Biosynthesis
Cholesterol and the steroid production pathway Cholesterol is the building block of steroid hormones. All steroid- producing organs with the exception of the placenta can synthesize cholesterol from acetate. Under most circumstances, however, local synthesis cannot meet demand and circulating cholesterol must be used. The major carriers of cholesterol in the bloodstream are the low density lipoproteins (LDLs). LDL is removed from the blood by steroidogenic cells using cell surface receptors that recognize specific surface proteins on LDL called apoproteins. Once in the cell, cholesterol is carried through a sequence of enzymatic changes to produce a final product that belongs to one of the major classes of steroid hormones: progestins, androgens and estrogens (sex), glucocorticoids (sugar) and mineralocorticoids (salt). All steroid-producing tissues use a common sequence of precursor molecules and enzymes (Fig. 2.1). Tissue specificity is conferred by the presence or absence of specific enzymes in the sequence. For instance, the gonads differ from the adrenal glands in that ovaries and testes do not express the 21-hydroxylase or 11β-hydroxylase enzymes that are necessary to produce corticosteroids. Therefore, the gonads only produce three classes of steroids: progestins, androgens and estrogens.


During conversion of cholesterol to steroid metabolites, the number of total carbon atoms decreases sequentially. Progestins have 21 carbons (C-21); androgens have 19 carbons (C-19); and estrogens have 18 carbons (C-18). Thus, progestins are obligatory precursors of both androgens and estrogens. Likewise, androgens are obligatory precursors of estrogens.
Most of the steroidogenic enzymes are members of the cytochrome P450 class of oxidases. A single mitochondrial protein P450scc, the cholesterol side chain cleavage enzyme, mediates all steps in the con- version of cholesterol to pregnenolone. The activity of this protein represents the rate-limiting step for the entire steroid pathway. Not surprisingly, it is also the major site of tropic hormone stimulation. Genetic mutations of P450scc are very rare and usually lethal. No steroid hormones can be produced by an individual with an inactive P450scc enzyme.
Once pregnenolone is formed, steroid production can proceed down one of two paths, through either progesterone or 17α- hydroxypregnenolone. All but two of the enzymes responsible for producing the steroid hormones are packaged within the endoplasmic reticulum, together with other members of the P450 system. The bio- synthetic units are very tightly linked together, thereby ensuring that very few of the steroid intermediates leave the cell. This packaging is also highly efficient in that it can convert an entire class of steroids to another. Thus, 17,20-desmolase will convert all progestins to androgens, and aromatase will convert all androgens but dihydrotestosterone (DHT) to estrogens. 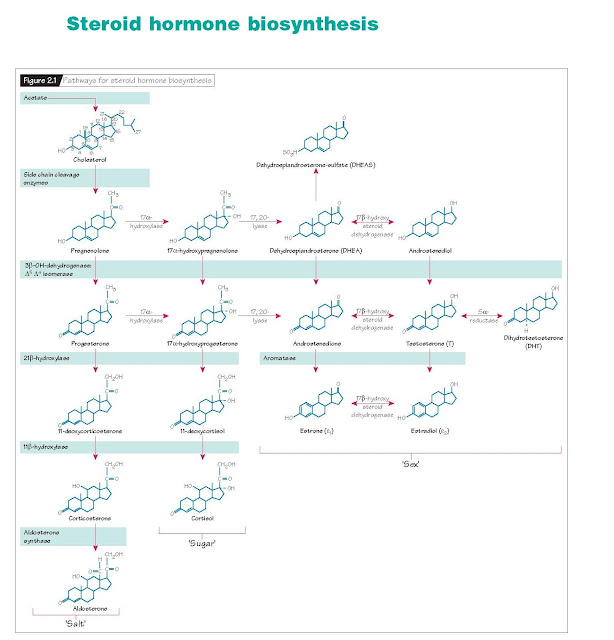 Sites of production
Ovary
In the ovary, steroid production occurs in a two-cell system (Fig. 2.2). Theca cells produce androgens. These androgens diffuse into the granulosa cells where they are converted to estrogens. Tropic hormones regulate specific steps in the sex steroid cascade. Theca cells respond to luteinizing hormone (LH) by increasing the number of LDL receptors and hence cholesterol entry into the cells. LH also stimulates P450scc activity, allowing increased androgen production. When these androgens diffuse into granulosa cells, they are metabolized by aromatase into estrogens. Follicle-stimulating hormone (FSH) induces the activ- ity of aromatase in the granulosa cell, thereby increasing the conversion of androgens to estrogens. The single aromatase gene has many promoter sites. These are responsive to cytokines, cyclic nucleotides, gonadotropins, glucocorticoids and growth factors.
Testes
In the testes, androgen production occurs largely in the Leydig cells under the influence of LH. Androgens produced in the Leydig cells either enter the bloodstream directly or diffuse into nearby Sertoli cells. Sertoli cells can convert androgens to estrogens using aromatase or reduce them to dihydrotestosterone via 5α-reductase. Because the specific cell types within the differentiated male and female gonads have common embryonic origins (Chapter 5), the mechanisms for steroid production in the testes very much parallel those in the ovary.
Adrenals
Sex hormone production by the adrenals occurs largely as a by-product of corticosteroid biosynthesis. The contribution of adrenal sex steroids to the total pool of circulating sex steroids is typically small, although there are several important exceptions. The ovaries of postmenopausal women no longer produce significant amounts of steroid hormones so adrenal androgen production can become clinically significant. In pregnancy, the placenta cannot synthesize cholesterol from acetate. Rather, it relies on adrenal androgens of both maternal and fetal origin to make estrogens.
With the exception of P450scc, inherited defects in any of the enzymes involved in steroidogenesis are associated with clinical syndromes resulting either from accumulation of a precursor product or absence of a key end-product. For example, an inherited deficiency of the enzyme 21-hydroxylase in the adrenal gland will lead to a deficiency in adrenal cortisol production. Low cortisol levels feedback to promote enhanced production of adrenal glucocorticoids. The enzymatic block, however, results in an accumulation of precursor progestins, some of which will be shunted down functional androgen biosynthetic pathways. If the 21-hydroxylase deficiency occurs in a female fetus, the increase in androgen production may cause masculinization of the external genitalia, known as congenital adrenal hyperplasia syndrome (Chapter 27). Similarly, disorders of male sexual differentiation and development may result from genetic defects in androgen production (Chapter 26).