Embryology Of The Skin


At approximately 4 weeks after conception, a single layer of ectoderm is present, surrounding a thicker layer of mesoderm. Two weeks later, this ectodermal layer has separated into two different components: an outer periderm and an inner basal layer, which is connected to the underlying mesoderm. At 8 weeks after conception, the epidermis has developed into three separate layers: the periderm, an intermediate layer, and the basal cell layer. The dermal subcutaneous tissue is now beginning to develop, and a distinct dermal subcutaneous boundary can be seen by the end of the eighth week. Between weeks 10 and 15 after conception, the beginning of the skin appendages can be seen.
The formation of hair follicles is initiated by a complex genetic mechanism that causes the dermis to direct certain basal epidermal cells to congregate and form the rudimentary hair follicle. This process occurs in a highly organized fashion beginning from the scalp and working caudally to the lower extremity. At the same time, the hair follicles are developing and the dermal papillae are beginning to form. The hair follicles continue to differentiate throughout the second trimester, and the hair of the fetus can be seen at approximately 20 weeks after conception. This first hair is known as lanugo hair and is almost always shed before delivery. 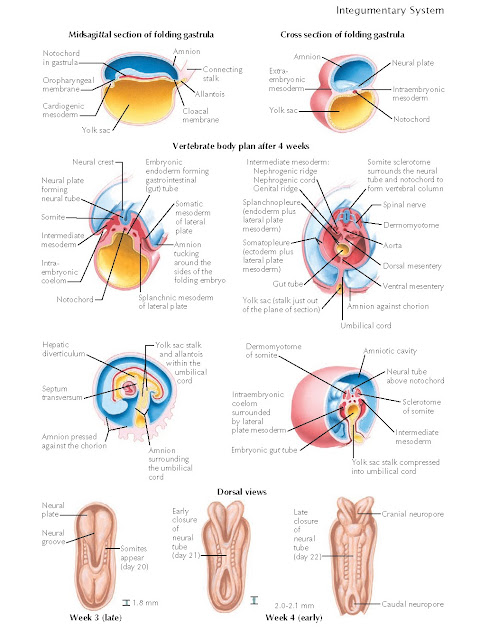 The fingernails and toenails develop from ectoderm that invaginates into the underlying mesoderm by the fourteenth week after conception. By the fifth month, the fetus has fully developed fingernails and toenails. The fingernails fully develop slightly before the toenails.
Melanocytes are specialized cells derived from neural crest tissue. These cells form along the neural tube. Melanocytes migrate in a specific pattern laterally and then outward along the trunk. Melanocytes can be seen in the epidermis by the middle of the first trimester, but they are not functional until the end of the second trimester. The density of melanocytes is highest during the fetal period and decreases thereafter until young adulthood. Melanocytes are beginning to make their first melanosomes and are capable of transferring melanin pigment to adjacent keratinocytes by approximately 5 months after conception. Melanocytes are not fully functional until birth. Langerhans cells are specialized immune surveillance cells that appear within the epidermis at approximately 40 days after conception. In contrast to melanocytes, the density of Langerhans cells increases with time.

By late in the second trimester, the periderm begins to shed. This shedding results in the vernix caseosa, a whitish, cheese-like material that covers the fetus. It is believed to have a protective function. At the beginning of the third trimester, the individual epidermal layers can be seen, including the stratum basale, stratum granulosum, stratum spinosum, and stratum corneum. Keratinization begins to occur during the second trimester, first in the appendageal structures and then in the epidermis. The thickness of the epidermis in a newborn closely approaches that in an adult. The significant difference is that the skin barrier function in a newborn is not as fully developed as in an adult and therefore is more vulnerable to infection and external insults.
By studying the embryology of the skin, one can gain insight into the mechanisms of certain genetic disorders. For example, one of the more studied groups of genetic diseases are the congenital blistering diseases. The various types of epidermolysis bullosa are all caused by genetic defects in proteins responsible for adhesion of keratinocytes. A firm understanding of the embryology of skin development is essential for under- standing the pathogenesis of these diseases and ultimately for developing a mechanism to detect and therapeutically treat them.