The Hypothalamus And Pituitary Gland


The Hypothalamus And Pituitary Gland
Clinical scenario
A 51-year-old man was referred to the Endocrine Clinic as an emergency complaining of loss of vision in both sides of his visual field. He had been increasingly tired over the preceding few months, felt ‘sluggish’ and had lost all motivation for his usual activities. He was shaving less frequently than normal and had lost some body hair. He had also lost interest in sex, although put this down to his exhaustion and ‘getting older’. More recently, he felt dizzy when he got out of bed or stood up from a chair. On examination he had clinical features of pan- hypopituitarism and examination of his visual fields revealed a bitemporal hemianopia. Biochemical investigations con- firmed the presence of hyperprolactinaemia (serum prolactin 35000 mU/L) and suppressed values of cortisol, thyroxine, TSH, LH, FSH, testosterone and IGF-1. An MRI scan showed a large pituitary tumour extending superiorly from the pituitary fossa and compressing the optic chiasm. He was treated with cabergoline, a long-acting dopamine agonist drug which subsequently caused shrinkage of the tumour. Examples of pituitary tumours are shown in Fig. 5a. 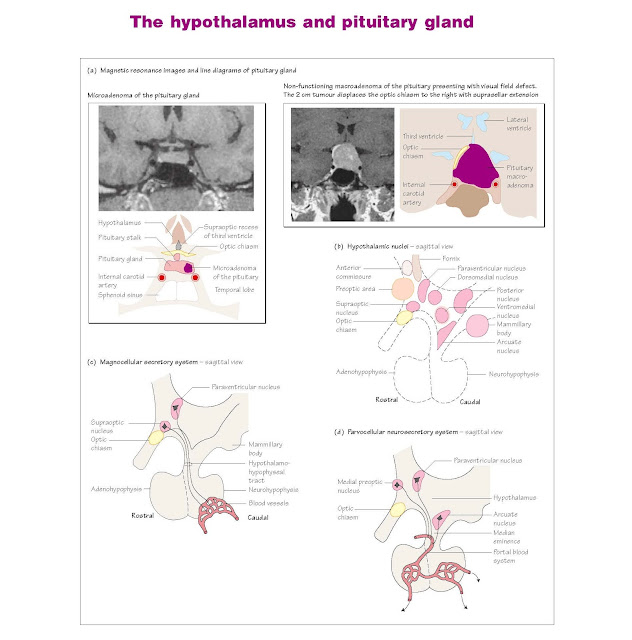 The Nuclei
Supraoptic group of nuclei: the paraventricular (PVN) and supraoptic (SON) nuclei have axons projecting to the posterior pituitary as the hypothalamic–hypophyseal tract. The PVN and SON contain large, richly vascularized cells, which together are termed the magnocellular secretory system (Fig. 5c). The PVN has other, smaller cells which contribute to a diffuse collection of hypothalamic neurones called the parvocellular secretory system (Fig. 5d), which, through the neurohormones it sends to the anterior pituitary, controls anterior pituitary function. Both the SON and PVN contain cells which produce and secrete important neuropeptides, for example oxytocin. The PVN is interconnected with autonomic and other regions of the spinal cord and the brain stem, as well as with the pituitary gland.
The tuberal or middle group of nuclei are involved in pituitary regulation. These are the ventromedial, dorsomedial and arcuate nuclei. Like the PVN, the ventromedial is interconnected with other parts of the brain, including the spinal cord, the brain stem and the central grey matter of the midbrain. The arcuate nucleus, which is an autonomous generator of reproductively important rhythms, sends many axons to the median eminence, as well as to other parts of the hypothalamus and forebrain.
The mammillary or posterior group of nuclei runs caudally into the mesencephalic central grey area. Within this area are more magnocellular neurones which project to many parts of the brain.
The neurohormones
The magnocellular neurones of the SON and the PVN contain neurones which produce and secrete oxytocin and vasopressin (antidiuretic hormone, ADH). The hormones are produced in different neurones and are transported to the posterior pituitary gland via their axons, which comprise the hypothalamic–hypophyseal tract.
The neurones of the parvocellular neurosecretory system send their axons to the median eminence, where their terminals release the ‘releasing hormones’: corticotrophin-releasing hormone (CRH); gonadotrophin-releasing hormone (GnRH); thyrotrophin-releasing hormone (TRH); and many other pep- tides, including somatostatin and neurotensin. Other substances emptied into the portal system include the dynorphins, enkephalins and β-endorphin, GABA, dopamine and many more substances.
GnRH neurones send axons not only to the median eminence, but to other parts of the brain, giving rise to the idea that GnRH may be a neurotransmitter as well as a prime regulator of fertility.
Cells of the PVN parvocellular system are rich in CRH and TRH, and project to the median eminence. The arcuate nucleus is rich in prolactin neurones, also called tubero-infundibular dopamine neurones. Arcuate neurones also contain the peptides galanin and growth hormone releasing hormone (GHRH), the opioids, somatostatin and several other substances, many of which are transported to the median eminence and the portal system.