Mechanisms Of Hormone Action: II Intracellular Receptors
Clinical background
Estrogen stimulates the proliferation of breast cancer tissue and exposure to estrogens may be important in the pathogenesis of this disease. During the treatment of women with breast cancer it is routine practice to establish the presence (ER +ve) or absence (ER -ve) of estrogen receptors in cancer cells. Women who have ER + ve tumours are more likely to respond to endocrine manipulation following surgery and/or chemotherapy (50–60% response rate in ER +ve cancers, 5–10% in ER−ve tumours). The most commonly used endocrine therapy is the drug tamoxifen which has estrogen-antagonist effects in the breast, probably mediated by the recruitment of corepressors for estrogen receptor action. It produces a significant fall in tumour recurrence and death rates for women with ER +ve disease, irrespective of age. The possible use of tamoxifen and the newer, selective estrogen receptor modulator drugs (SERMs, e.g. raloxifene, toremifine) for the prevention of breast cancer are under investigation. Trastuzumab, a humanized IgG1 against human epidermal growth factor receptor-2 (HER-2+), is now used to treat early breast cancer that overexpresses HER-2. 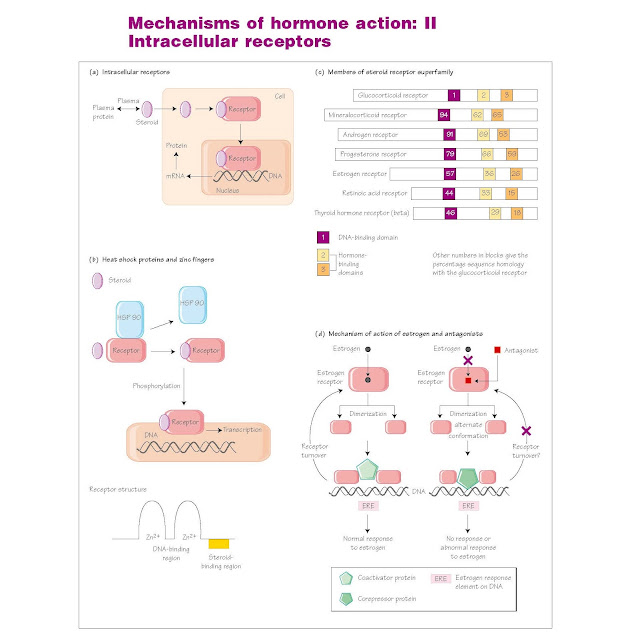 Intracellular receptors
Lipophilic hormones, such as steroids and the thyroid hormones, pass easily through the plasma membrane into the cell, where they combine with specific receptor proteins (Fig. 4a). In the inactive state, for the subfamily of glucocorticoid, progesterone, estrogen and androgen receptors, the receptor is bound to a heat shock protein (HSP 90; Fig. 4b).
When the hormone binds to the receptor, the HSP dissociates from it, the receptors form homodimers and the hormone– receptor complex binds to DNA at specific sites, termed hormone response elements (HREs), which lie upstream from transcription initiation sites. Transcription and subsequent protein synthesis are altered. The thyroid hormone and retinoic acid receptors are not associated with HSPs in their inactive state, and are able to associate with their response elements on the DNA in the absence of the hormones, and act as transcription inhibitors (see also below). Activation of receptors expressing the actions of the hormones appears to be achieved through phosphorylation, although at present this process is poorly understood.

Estrogen receptors
Two distinct, main receptor forms have been discovered, called ER-α and ER-β respectively. They have different affinities for estradiol and different anatomical distribution. For example only ER-α has been found in the liver, and ER-β is the pre- dominant form in prostate. These differences may account, in part, for the wide diversity of estrogen action in different tissues and under different physiological and pathological states. It has been found, for example, that in healthy ovarian tissue the β form predominates, but in ovarian cancer the a form predominates. It is possible that the β form somehow regulates the activity of the α form. The α and β forms have several nuclear coactivators and repressors, and their activity depends also on their rates of turnover.
Estrogen receptor antagonists have found a powerful use in the prevention and treatment of breast cancer (see Clinical scenario above). These compounds interfere with the processing of the normal intracellular hormone–receptor interaction. This can occur at one or more of several sites (Fig. 4d). The receptor itself may be blocked or post-receptor-binding events, for example receptor dimerization, receptor turnover or mRNA or protein synthesis, may be inhibited. Examples of estrogen receptor blockers are the SERMS (selective estrogen receptor modulators) such as tamoxifen, raloxifene and to remifene. These are interesting because they appear to act as agonists in some tissues such as bone and liver cells, and may therefore be important preventive measures for reducing the rate of development of osteoporosis and for lowering blood cholesterol. SERMS may act by activating as yet unidentified coactivators or corepressors and may modulate estrogen receptor turnover. Their action may also be dictated by whether they combine with ER-a or ER-b receptors.