Mechanisms Of Hormone Action: I Membrane Receptors
Clinical background
Acromegaly is usually caused by anterior pituitary gland tumours which secrete growth hormone. In 30 to 40% of cases, the tumour is thought to arise due to a somatic mutation affecting transmembrane signalling mechanisms. The stimulatory G-protein Gs is involved in signal transduction at the growth hormone releasing hormone receptor. Mutation of the α-subunit of Gs into the gsp oncogene prolongs the activation phase of the G-protein system, allowing unrestrained hormone synthesis and cell division. The distinctive clinical features of acromegaly and development of the pituitary tumour follow.


Introduction
Hormones interact with target cells through a primary interaction with receptors which recognize the hormones selectively. There are several different receptor systems, which vary in mechanism and timing (Fig. 3a). Charged ions such as peptides and neurotransmitters bind to receptors on the cell membrane. This causes a conformational change in other membrane proteins, which activate enzymes inside the cell, resulting in, for example, the synthesis of ‘second messengers’, which activate phosphorylating enzymes.
Uncharged molecules, such as the steroid hormones diffuse into the cell and bind to intracellular receptors(see Chapter 4). The hormone–receptor complex binds to specific hormone response elements (HRE) on the DNA; the result is that RNA and protein synthesis are altered.
The cell will react faster to peptide hormones and neurotransmitters than it will to steroid hormones, which work through relatively slow changes in protein synthesis. Never the less, membrane receptors have been discovered for steroid hormones, although the significance of these is not yet clear. 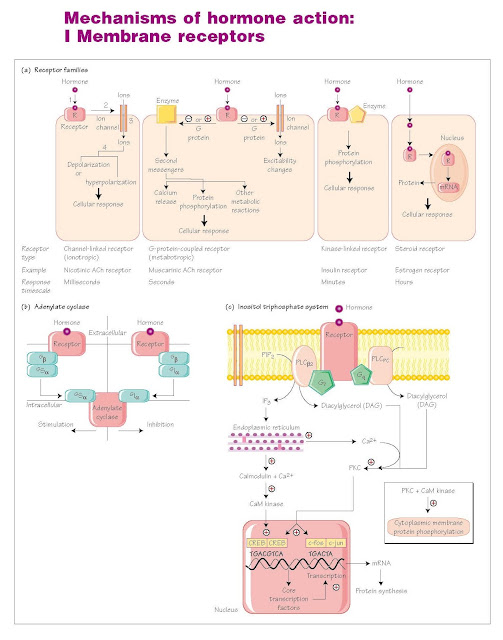 Membrane receptors
Three regions can be distinguished in membrane receptors: the extracellular; the membrane-spanning; and the intracellular domains. The extracellular N-terminal domain has the hormone- binding domain, and also has glycosylation sites. The extracellular domain that binds the receptor is often rich in cysteine residues, which form rigid pockets in which the hormone is bound. The transmembrane region consists of one or more segments, made up of hydrophobic (uncharged) amino acids, arranged helically, whose role may include the anchoring of the receptor in the membrane. Different subunits within the mem- brane may be held together by means of disulphide linkages (e.g. the insulin receptor, Chapter 39). The intracellular domain is the effector region of the receptor, which may be linked with another membrane protein system, a set of enzymes which are guanosine triphosphatases (GTPases). The β-adrenergic receptor is an example of a G-protein-linked receptor. Another class, which includes the insulin receptor, has the intracellular domain as a tyrosine protein kinase. The intracellular region may also have a regulatory tyrosine or serine/ threonine phosphorylation site.

Second messengers
G protein linked receptors. These are protein receptors in the cell membrane, with an extracellular domain and an intracellular domain. The peptide chain that forms the protein always spans the membrane. When the hormone binds to the extracellular domain, this causes a change in shape of the receptor. This causes the intracellular domain to activate G proteins. G proteins have three main parts: an a subunit, a b subunit and a g subunit. When activated, firstly the a subunit substitutes a GDP molecule for a GTP molecule. This results in the activation of the G proteins. They can be either stimulatory or inhibitory, that is they can cause an increased level of enzyme activity or a decreased level of activity in the second messenger systems. Mutations of G proteins can occur and may result in disease (see Clinical scenario above). Adenylate cyclase system. The hormone binds to the receptor, which activates a membrane G protein, which moves to the receptor (Fig. 3b). In the inactive state, the G protein binds GDP, which is exchanged for GTP, and a subunit of the G protein activates adenylate cyclase to convert ATP to the second messenger cyclic AMP. Adenylate cyclase is situated on the plasma membrane, but does not itself bind the hormone. Once formed in the cytoplasm, cAMP activates the catalytic subunit of a specific protein kinase (PKA), which forms part of a cascade of intracellular phosphorylations resulting in the cellular response. Since just one molecule of hormone can result in the production of many molecules of cAMP, this is a very efficient means of amplifying the receptor–hormone interaction. Once formed, cAMP is rapidly broken down by the enzyme phosphodiesterase. An example of a hormone operating through adenylate cyclase is epinephrine, through the adrenergic β-receptor.
Hormones can produce inhibitory effects on a cell, and this may be achieved through the fact that some G proteins, such as GI, may inhibit adenylate cyclase, thus inhibiting the formation of cAMP. An example of this mechanism in action is the inhibition of adenylate cyclase through the binding of norepinephrine to the α-2-receptor on the presynaptic nerve terminal.

Inositol triphosphate system. In this system, the hormone–receptor–G-protein complex interaction triggers the membrane enzyme phospholipase C (PLC), which catalyses the hydrolysis of phosphoinositol (PIP2) to two important metabolites, inositol triphosphate (IP3) and diacylglycerol (DAG; Fig. 3c). IP3 generates, from the endoplasmic endothelium, increased free Ca2+, which together with DAG promotes the activation and migration to the membrane of the enzyme protein kinase C (PKC). PKC may also be mobilized through the entry of Ca2+ into the cell. Examples of hormones and neurotransmitters which activate the system are epinephrine acting on α-1 receptors and acetylcholine on muscarinic cholinergic receptors. These systems are important clinically since they provide substantial numbers of possible targets for drugs.

Receptor antagonists
Receptor antagonism is an important aspect of endocrinology and drug use generally, not only in terms of the study of the hormone–receptor interaction, but also in therapeutic terms, since antagonists play a large part in the treatment of endocrine disease. The molecule which binds to the receptor and elicits the normal cellular response is termed the agonist. The ligand which binds, but elicits no response, is the antagonist. Antagonists act at the membrane in different ways. For example the β-receptor blocker propranolol competes with epinephrine at its binding site. The anticonvulsant phenytoin blocks ion channels.