Chemical transmission
Classification of endocrine hormones Hormones are chemical messengers. They may be classified several ways (Fig. 2a):


1. Autocrine: acting on the cells that synthesized them; for example insulin-like growth factor (IGF-1) which stimulates cell division in the cell which produced it.
2. Paracrine: acting on neigh bouring cells. An example is insulin, secreted by pancreatic b cells and affecting secretion of glucagon by pancreatic a cells.
3. Endocrine: acting on cells or organs to which they are carried in the bloodstream or through another aqueous ducting system, such as lymph. Examples include insulin, estradiol and cortisol.
4. Neuroendocrine: this is really paracrine or endocrine, except that the hormones are synthesized in a nerve cell (neurone) which releases the hormone adjacent to the target cell (paracrine), or releases it into the bloodstream, which carries it to the target cell, for example from the hypothalamus to the anterior pituitary gland through the portal system.
5. Neural: this is neurotransmission, when a chemical is released by one neurone and acts on an adjacent neurone (Fig. 2b). These chemicals are termed neurotransmitters. Neurotransmitters produce virtually instantaneous effects, for example acetylcholine, whereas some chemicals have a slower onset but longer lasting effect on the target organ, and are termed neuromodula- tors, for example certain opioids.
6. Pheromonal transmission is the release of volatile hormones, called pheromones, into the atmosphere, where they are transmitted to another individual and are recognized as an olfactory signal. 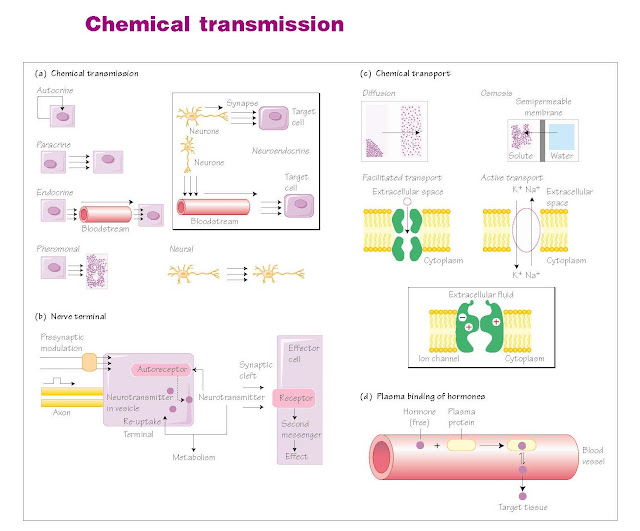 Chemical Transport
The movement of chemicals between cells and organs is usually tightly controlled.
Diffusion is the movement of molecules in a fluid phase, in random thermal (Brownian) motion (Fig. 2c). If two solutions containing the same chemical, one concentrated and the other relatively dilute, are separated by a membrane which is completely permeable and passive, the concentrations of the chemical on either side of the membrane will eventually end up being the same through simple diffusion of solutes. This is because there are many molecules of the chemical on the concentrated side, and therefore a statistically greater probability of movement from the more concentrated side to the more dilute side of the membrane. Eventually, when the concentrations are equal on both sides, the net change on either side becomes zero. Lipophilic molecules such as ethyl alcohol and the steroids, for example estradiol, appear to diffuse freely across all biological membranes.
Facilitated transport is the transport of chemicals across membranes by carrier proteins. The process does not require energy and cannot, therefore, transport chemicals against a concentration gradient. The numbers of transporter proteins may be under hormonal control. Glucose is carried into the cell by transporter proteins (see Chapter 39) whose numbers are increased by insulin.
Active transport uses energy in the form of adenosine tri- phosphate (ATP) or other metabolic fuels. Therefore chemicals can be transported across the membrane against a concentration gradient, and the transport process can be interrupted by metabolic poisons.
Ion channels mediate active transport, and consist of proteins containing charged amino acids that may form activation and inactivation ‘gates’. Ion channels may be activated by receptors, or by voltage changes through the cell membrane. Channels of the ion Ca2+ can be activated by these two methods.
Osmosis is the passive movement of water through a semi- permeable membrane, from a compartment of low solute con- centration to one which has a greater concentration of the solute. (‘Solute’ refers to the chemical which is dissolved in the ‘solvent’, usually water in biological tissues.) Cells will shrink or swell depending on the concentrations of the solutes on either side of the membrane.
Phagocytosis and pinocytosis are both examples of endocytosis. Substances can enter the cell without having to pass through the cell membrane. Phagocytosis is the ingestion or ‘swallowing’ of a solid particle by a cell, while pinocytosis is the ingestion of fluid. Receptor-mediated endocytosis is the ingestion of specifically recognized substances by coated pits. These are parts of the membrane which are coated with specific membrane proteins, for example clathrin. Exocytosis is the movement of substances, such as hormones, out of the cell. Chemicals which are stored in the small vesicles or packets are secreted or released from the cell in which they are stored by exocytosis, when the vesicle fuses with the membrane.
Hormone transport in blood. When hormones are secreted into the blood, many are immediately bound to plasma proteins (Fig. 2d). The proteins may recognize the hormone specifically and bind it with high affinity and specificity, for example the binding of sex hormones by sex hormone-binding globulin (SHBG). Other proteins, such as albumin, also bind many hormones, including thyroid hormone and the sex hormones, with much lower affinity. Equilibrium is set up between the free and bound hormone, so that a fixed proportion of the hormone travels free and unbound, while most is carried bound. It is currently believed that only the free fraction of the hormone is physiologically active and available to the tissues and for metabolism. When a hormone is bound to plasma proteins it is physiologically inactive and is also protected from metabolic enzymes in organs such as the liver. Some drugs, such as aspirin, can displace other substances such as anticoagulants from their binding sites, which in the case of anticoagulants may cause haemorrhage.