Growth: I Cellular Growth Factors
Clinical background
Tumours secreting IGF-1 and IGF-2 have been described in humans. They are very rare! The tumours are part of the group of neuroendocrine tumours, the most common of which are carcinoids. Patients with neuroendocrine tumours may present with severe hypoglycaemic episodes and confirmed hypoglycaemia in non-diabetic patients should always be investigated. The primary tumour may be difficult to localize and the patient requires specialist treatment from a multidisciplinary team of endocrinologists, surgeons, radiologists and oncologists. 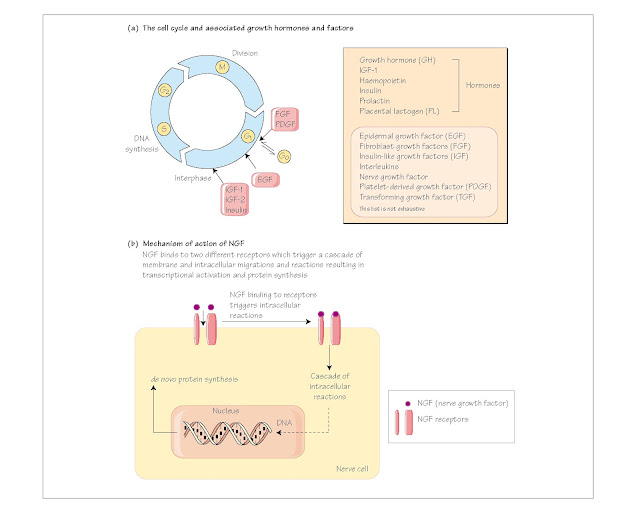 Cellular growth and proliferation
The cell cycle
The growth phase is G1, which prepares the cell for the synthetic phase S, during which the DNA becomes duplicated (Fig. 9a). The cell splits into two daughter cells in the M phase. The new cells may thereafter remain in G0 (e.g. neurones, muscle cells), or enter G1 to repeat the cycle. Tumour cells may remain in G0, before re-entering G1. Growth factors and hormones act at specific phases of the cell cycle.

Growth factors
Insulin-like growth factors (IGF-1, IGF-2). IGF-1 and IGF-2 mediate the actions of growth hormone and have other important metabolic effects. GH causes the release of IGF-1 and IGF-2 from the liver, although IGF-1 is the most GH dependent. Both circulate in plasma bound to proteins known as IGF- binding proteins (IGF-BPs), of which six specific types have been described. Cellular responses to IGF are mediated by specific IGF receptors, which are similar to but distinct from insulin receptors. Plasma levels of IGF-1 and IGF-2 remain fairly constant in the healthy adult due to the stability of their binding proteins. IGF-1 mRNA can be detected in numerous body tissues and is thought to play a GH-independent role in tissue growth. Its production is stimulated by insulin and the hyperinsulinaemia of obesity may affect circulating IGF-1 and IGF-BP concentrations.

Insulin. Apart from its role in the control of carbohydrate metabolism, insulin is an anabolic hormone. Without insulin, protein catabolism is enhanced and amino acid uptake into muscle is inhibited, as is the translation of mRNA.

Placental lactogen (PL) is a placental hormone. Many of the actions of PL are similar to those of prolactin. PL promotes growth of the mammary duct system, milk protein synthesis and the incorporation of sulphur into cartilage. PL may play a role in mammary gland development and in preparation for the action of prolactin after parturition. PL antagonizes the actions of insulin, and promotes amino acid and glucose utilization in the fetus. During the second trimester of pregnancy, PL may take over the role of chorionic gonadotrophin, the levels of which begin to decline.

Nerve growth factor (NGF) is similar in structure to proinsulin. It is secreted in large amounts by the submandibular glands, under the control of tri-iodothyronine, thyroxine and testosterone, and is therefore present in much larger quantities in the saliva of the male. NGF is critically important in nerve growth and regeneration and may play a role in fighting, since it is released into the bloodstream in huge amounts when male mice fight each other. NGF, in common with most other growth factors, binds to membrane receptors to trigger an intracellular cascade of reactions resulting in de novo protein synthesis (Fig. 9b).

Injection of NGF antiserum into the developing rat embryo causes widespread damage to the sympathetic division of the autonomic nervous system. NGF induces neurite growth and plays a role in the guidance of growing sympathetic fibres to the organs they will ultimately innervate. Cells in the path of the growing axon synthesize and release NGF. In the brain, NGF may have a role in maintaining memory, since it restores learning and memory to rats with brain lesions, which suggests that NGF may be useful in Alzheimer’s disease.

Epidermal growth factor (EGF) is a 53 amino acid peptide, isolated from the mouse salivary gland, where it is associated with an EGF-binding protein. EGF is released by α-adrenergic agonists, suggesting that release is under autonomic control. In the embryo and neonatal mouse, EGF promotes proliferation of the cells of the epidermis, the opening of the eyelids and the eruption of teeth. EGF promotes the maturation of the epithelium of developing lungs, keratinization of the skin and phosphorylation of proteins. EGF is present in breast milk as a mitogenic factor.

Transforming growth factors (TGF). TGF-α and TGF-β are peptides which cause the growth of fibroblast cells. TGF-α is a 50 amino acid peptide, structurally similar to EGF. It binds to the EGF receptor and shares many of the actions of EGF. TGF-α itself exists in at least five forms (TGF-α-l to TGF-α-5).
TGF-β also exists in at least five forms (TGF-β-1 to TGF- β-5) and was originally discovered in platelets. It is present in most cells, especially in bone matrix where it may be important in chondrocyte, osteoblast and osteoclast differentiation and growth.
TGF-β can be stimulatory or inhibitory to the growth of non- endothelial cells, depending on the presence or absence of other factors. It does not bind to the EGF receptor. It may be inhibitory or stimulatory to organ and tumour growth, and modulates the action of other growth factors, including that of EGF. TGF-β has structural homology with the Müllerian inhibiting hormone and inhibin.

Platelet-derived growth factor (PDGF) is synthesized and stored in blood platelets, and released when platelets are activated during blood vessel injury. Other tissues synthesize and store PDGF. The peptide is a heterodimer consisting of A and B chains, and forms part of a larger family consisting of PDGF (AA), (AB) and (BB). AB is the predominant form present in platelets. There are two different receptors for PDGF, one which recognizes all the heterodimers, and one which recognizes only BB. PDGF is a powerful cell growth promoter in vitro, has strong chemotactic properties and appears to have a role in inflammation and tumour and cell growth.

Erythropoietin is erythrocyte-stimulating factor, produced in the kidneys, which travels to the bone marrow to stimulate production of mature red blood cells. In plasma, erythropoietin has a half-life of 5 hours, while its effects are not manifested for at least 36 hours, a time sequence consistent with the probability that erythropoietin generates a sequence of haemopoietic events which are not dependent on its continuous presence for completion.

The interleukins are a family of at least eight proteins. They are examples of the cytokines, a group of soluble proteins which act as intercellular communicators. IL-1 is produced by activated macrophages, and stimulates IL-2 production by T cells and proliferation and differentiation of B cells. IL-2 is produced by T cells activated during an immune response. IL-6 is interferon-β, which is synthesized by fibroblasts and some tumour cells. It increases immunoglobulin synthesis, and has antiviral activity.