Growth: II Normal Growth
Clinical background
Short stature in children is a common presenting complaint. The majority of short children do not have an identifiable abnormality and thus it is important to make accurate measurements of height over a period of time and to calculate growth velocity. Short stature can reflect a wide range of underlying causes, ranging from nutritional and psychosocial factors, to endocrine disorders and genetic dysmorphic syndromes.


Growth hormone deficiency (GHD; Fig. 10a) has numerous causes related to congenital midline structural defects of the hypothalamus and pituitary, acquired lesions following perinatal trauma or central nervous system infections, primary and secondary tumours of the hypothalamus and pituitary, autoimmune hypophysitis and following cranial irradiation. In the majority of cases the cause is unknown (‘idiopathic’ GHD; Fig. 10b). Children with GHD present with growth failure and typical features relating to GH effects on bone and body com- position. Thus the facial appearance is immature with a depressed central zone and prominent forehead related to lack of GH effects on skull maturation. GHD children have reduced muscle bulk and increased central fat deposition consistent with a lack of the metabolic effects of GH. Untreated they will reach approximately 65 to 70% of predicted adult height and this can be reversed by the introduction of GH replacement therapy at the earliest possible age (Fig. 10a). 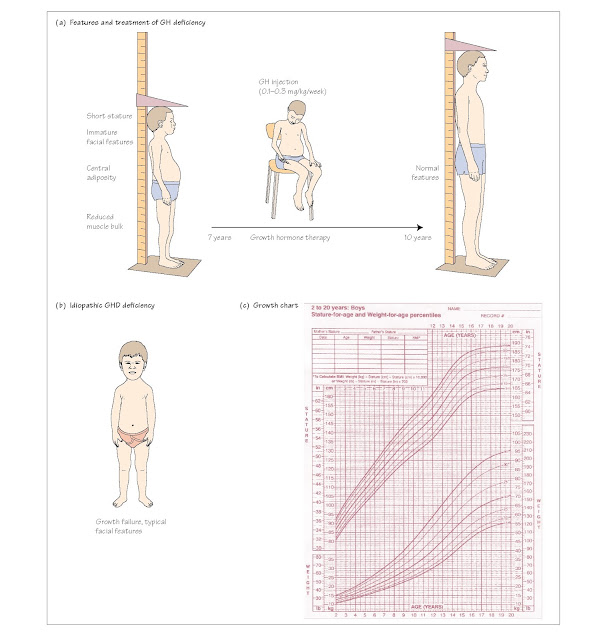 Normal growth
Prenatal growth
The growth rate is an informative index of mental and physical development, both pre- and postnatally. Normal intrauterine growth and development are critically dependent on maternal diet and state of health and adversely affected by excessive maternal alcohol intake and smoking. Endocrine influences on intrauterine growth and development are poorly understood.
Circulating maternal unconjugated estriol is an important index of normal fetal growth. Estriol’s function is not understood but it is known to be produced by the placenta using precursor steroids derived from both fetus and mother. Table
10.1 shows expected ranges during pregnancy. Reduced values may point to the possibility of intrauterine growth retardation or Down’s syndrome (Table 10.2).

Postnatal growth
Human postnatal growth in stature and weight is assessed relative to standardized growth curves (Fig. 10c). Growth rates are highest during fetal development and just after birth. There is a spurt in growth in boys and girls between 6½ and 7 years, followed by a plateau and then the sharp pubertal growth spurt. Growth ceases with the fusion of the long bone epiphyses by sex steroids, reflecting full adult growth and maturation.
Normal growth is influenced by genetic, socioeconomic and nutritional factors, and chronic disease. There is a good correlation between parental and child height which is sex-specific. The correlations with respect to birth length, rate of growth and final height are well documented in families. Poor hygiene, poverty and malnutrition adversely affect growth before and after parturition. Smoking, alcohol and drug abuse have deleterious effects on the fetus and growing child. Malnutrition is associated with several adverse effects on the endocrine system, including decreased concentrations of circulating IGF-1, decreased GH receptors and post-GH receptor defects with the predicted elevation of serum GH.
Any form of chronic disease, particularly when associated with malabsorption, such as coeliac disease or inflammatory bowel disease, may impair growth and should be excluded before subjecting a child to lengthy endocrine investigation of short stature. Endocrine hormones are essential for postnatal growth. Growth hormone (GH) exerts its effects directly and through the mediation of the insulin-like growth factors. Disorders of GH synthesis, secretion or action may originate in the hypothalamus, pituitary gland, at sites of IGF-1 production or at target organs for the hormones. Thus GH abnormalities in children may present with low or absent circulating GH concentrations (asinidiopathic GH deficiency) or with the elevated GH levels seen in association with GH receptor abnormalities in the Laron syndrome.
Thyroid hormones are essential for normal intrauterine and postnatal development; fetal thyroid deficiencies cause mental impairment and delayed development, but whilst postnatally acquired hypothyroidism inhibits growth it does not usually affect mental development. Excess glucocorticoid treatment in childhood can also impair growth. The gonadal sex steroids are essential for the normal pubertal growth spurt and individuals with delayed puberty present with short stature as well as developmental delay.