Growth: III Growth Hormone
Clinical background
Growth hormone is necessary for the maintenance of good health in adult life as well as for the promotion of growth in childhood. Adults with growth hormone deficiency (GHD) are physically and psychologically less well than normal subjects due to the diverse nature of GH action. The vast majority of patients with adult GHD have pre-existing hypothalamic pituitary disease, generally a pituitary adenoma. GHD may be part of the presenting illness or may be induced by pituitary surgery or radiotherapy used in treatment. A small percentage of patients with adult GHD will have presented with idiopathic GHD in childhood.


The adult GHD syndrome is characterized by abnormalities of metabolism, body composition and bone density and by psychological features of low mood, poor self-esteem, anxiety and social isolation. Adults with GHD have increased risk factors for cardiac disease reflected in reduced lean body mass, increased central fat deposition, raised cholesterol and harmful low-density lipoprotein concentrations and evidence of increased atheromatous deposits throughout the arterial system. Bone mineral density is reduced and there is an increased risk of fractures. The poor quality of life is a striking feature of the syndrome and has been demonstrated using recognized assessments of psychological health. GH replacement therapy is given as a daily subcutaneous injection of recombinant human GH. 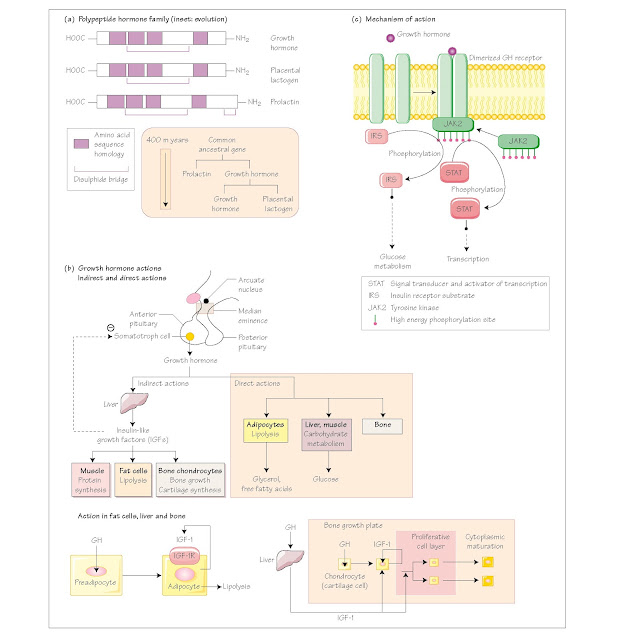 Growth hormone (GH)
Chemistry and synthesis
GH is synthesized in the somatotroph cells in the anterior pituitary gland. GH is a member of a family of polypeptide hormones, including prolactin (PRL) and placental lactogen (PL; Fig. 11a). GH is a single chain 191 amino acid polypeptide, and has a high structural homology with PL and PRL. All three are derived from a common precursor, even though each hormone has its own gene. They share a common ancestral gene from which the GH/PL gene diverged about 400 million years ago, and divergence of GH and PL genes occurred about 85 to 100 million years ago. The GH and PL genes exist as multiple copies on chromosome 17, and the PRL gene is a single copy on chromosome 6. Mouse fibroblasts synthesize a peptide called proliferin, which has significant structural homology with GH, PRL and PL, suggesting that this family may be larger than originally appreciated. GH and PRL exist in pituitary and plasma in more than one form, that is they show structural heterogeneity.

Actions of growth hormone (Fig. 11b)
The most dramatic action of GH is on muscle and skeletal bone growth. The actions may be conveniently divided into direct and indirect actions.
Indirect actions of growth hormone. GH acts in the liver to stimulate the synthesis and secretion of the peptide IGF-1 which stimulates bone growth. In fat cells, IGF-1 stimulates lipolysis and in muscle, it stimulates protein synthesis. Functional GH receptors also exist in bone, stimulating local production of IGF-1 in proliferative chondrocytes.
The direct actions of GH have been termed diabetogenic, since the hormone’s actions oppose those of insulin, being lipolytic in fat and gluconeogenic in muscle. These actions are implicated in disorders of GH action.
Growth hormone receptor (Fig. 11c). The mechanism of action of GH is still under investigation. It has a specific receptor on the membrane of the target cell. The growth hormone receptor is a polypeptide of 619 residues which is organized into three distinct domains, viz. an extracellular ligand binding domain, a single transmembrane segment and an intracellular domain. It is part of the haematopoietic type I cytokine receptor family. The extracellular domain of the GH receptor consists of 192 residues and has been found on the receptor and as a circulating isoform protein called growth hormone receptor binding protein, which is used as a marker of receptor number integrity. It appears that each asymmetrical molecule of GH binds two homologous binding domains on two separate GH receptors, and that there is a sequential effect, in that one part of the GH molecule must bind first to its site on one receptor followed by the other binding reaction to another receptor, for the cell to respond appropriately.
Signal transduction. No changes in cAMP or phosphoinositol (the PLC/IP3) systems have been reported. After the binding reactions have occurred, the cytoplasmic domain of the receptor recruits the tyrosine kinase JAK2, and phosphorylation of the receptor and the JAK2 occurs. Phosphotyrosine residues on both JAK2 and the growth hormone receptor have docking sites for several intracellular signalling proteins which possess phosphotyrosine motifs, for example SH2 domains. Thus, the growth hormone receptor complex somehow enables JAK2 to phosphorylate a number of different proteins, resulting in the cellular response. The substrates for phosphorylation by JAK2 include the insulin receptor substrate (IRS), the glucocorticoid receptor, the epidermal growth factor receptor, signal transducers and activators of transcription (STATS) and several others.
The cellular response depends on which of these molecules becomes phosphorylated, and the result may be, for example, a metabolic change or transcriptional activation or repression. For example activation of the insulin receptor substrate results in the insulin-like actions of growth hormone, while activation of STAT causes transcriptional activation. The growth hormone receptor is regulated by inhibitory intracellular proteins which prevent unregulated growth. Examples of regulators include: (i) SH2-domain-containing protein tyrosine phosphatases which dephosphorylate the receptor and the JAK2 tyrosine kinase; and (ii) suppressors of cytokine signalling (SOCS), which bind to JAK2 and block its kinase activity. These basic research discoveries are of great interest as possible new approaches to the treatment of growth hormone-related diseases.