Normal Skin Anatomy
The human skin, taken collectively, is the largest organ in the human body. On average, it weighs between 4 and 5 kg. It is vitally important to life. The skin is made up of three distinct layers: the epidermis, the dermis, and the subcutaneous tissue; some anatomists do not include the subcutaneous tissue as part of the skin and classify it separately as the hypodermis. Each of these layers plays a pivotal role in the execution of day-to-day functions of the skin. The skin’s main function is to protect the interior of the body from the exterior environment. It performs this role in many fashions: It acts as a semipermeable barrier to both hydrophilic and hydrophobic substances; it is the first line of immunological defense against invading microbes; it contains many components of the adaptive and innate immune system; and it has many physiological roles, including metabolism of vitamin D.


The majority of the epidermis is made up of keratinocytes. It also contains melanocytes, Langerhans cells, and Merkel cells. The epidermis is avascular and receives its nutrition from the superficial vascular plexus of the papillary dermis.
Melanocytes are derived from neural crest and are responsible for producing the melanin family of pigments, which are packaged in melanosomes. Melanocytes are found in equal density in all humans, but darker-skinned individuals have a higher density of melanosomes than those with lighter skin. This is the reason for color variation among humans. Eumelanin, the predominant type of melanin protein, is responsible for brown and black pigmentation. Pheomelanin is a unique variant of melanin that is found in humans with red hair. 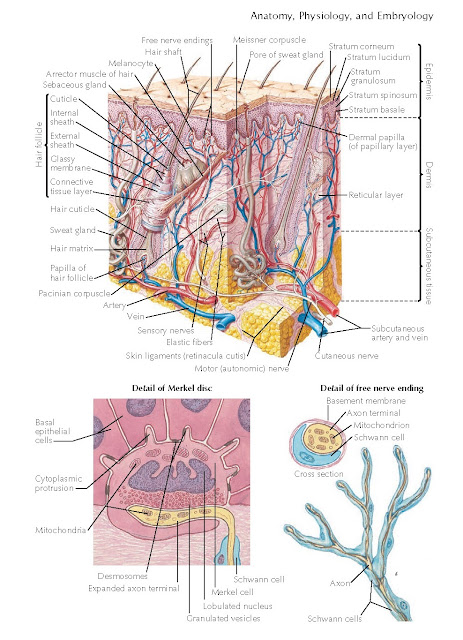 The skin is found in continuity with the epithelial lining of the digestive tract, including the oral mucosa and the anal mucosa. Distinct transition zones are seen at these interfaces. The skin also abuts the conjunctival mucosa of the globe and the mucosa of the nasal passages. The skin and its neighboring epithelial components supply the human body with a continuous barrier to protect it from the external world.
Many appendageal structures are present throughout the skin. The major ones are the hair follicles, their associated sebaceous glands, and the eccrine glands. Most of the skin is hair bearing. Fine vellus hairs make up the preponderance of the skin’s hair production. Terminal hairs are much thicker and are found on the scalp, eyebrows, and eyelashes; in the axilla and groin areas; and in the beard region in men. Glabrous skin, which is devoid of hair follicles, includes the vermilion border of the lips, the palms, the soles, the glans penis, and the labia minora.
Human skin varies in thickness. It is thickest on the back, and the thinnest areas are found on the eyelids and the scrotum. Regardless of thickness, all skin possesses the same immunological function and barrier activity.

Various appendageal structures are found in higher densities in certain regions of the skin. Sebaceous glands are located predominantly on the face, upper chest, and back. These glands play an instrumental role in the pathomechanism of acne vulgaris. Because sebaceous glands are attached to hair follicles, they are found only on hair-bearing skin. Eccrine sweat glands, on the other hand, are found ubiquitously. The highest densities of eccrine glands are on the palms and soles.
The other main sweat glands of the skin, the apocrine glands, are found almost exclusively in the axillae and the groin. The apocrine glands, like sebaceous glands, are found only in conjunction with hair follicles.
Nails are composed of specialized keratin proteins. These keratins make a hard nail plate that is believed to be important for protection, grasp, and defense. Fingernails and toenails are made of the same keratin structure and in the same manner. The only difference is that the fingernails grow slightly faster than the toe-nails. The average thumbnail takes 6 months to replace itself, whereas the average great toenail takes 8 to 12 months.
Skin is also an important means of communication with other humans. The sense of touch is mediated through specialized receptors within the skin. One cannot underestimate the importance of this function in the formation of human relationships.