The Beginnings Of An Immune Response


The Beginnings Of An Immune Response
Macrophages play an important role in instigating innate immune responses
As noted above, a major player in the initiation of immune responses is the macrophage. These cells are relatively abundant in most tissues (approaching 10–15% of the total cell number in some areas of the body) and act as sentinels for infectious agent through an array of pathogen recognition receptors (PRRs) borne on their plasma membranes as well as other cellular compartments such as endosomes. Tissue macrophages are relatively quiescent cells, biding their time sampling the environment around them through continuous phagocytosis. However, upon entry of a microorganism that engages one or more of their PRRs (such as a Toll‐like receptor or a NOD‐like receptor), a startling transition occurs. Engagement of the PRR on the macrophage switches on a battery of genes that equip it to carry out a number of new functions (Figure 1.12). 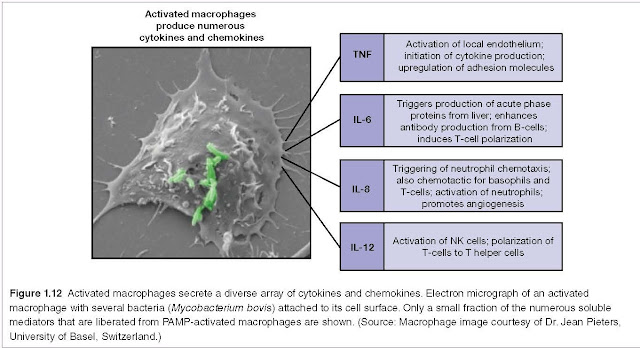 First, the macrophage is put on a state of high alert (i.e., becomes activated) and is now better at engulfing and killing any microorganisms it encounters (this will be discussed in detail in the next section). Second, the macrophage begins to secrete cytokines and chemokines that have effects on nearby endothelial cells lining the blood capillaries; this makes the capillaries in this area more permeable than they would normally be. In turn, the increased vascular permeability permits two other things to happen. Plasma proteins that are normally largely restricted to blood can now invade the tissue at the point of infection and many of these proteins have microbicidal properties. A second consequence of increased vascular permeability is that neutrophils can now gain access to the site of infection. Recall from our earlier discussion that neutrophils, like macrophages, are also adept at phagocytosis but are normally not permitted to enter tissues owing to their potentially destructive behavior. Upon entry into an infected tissue, activated neutrophils proceed to attack and engulf any microorganisms they encounter with gusto. We will deal with the specific mechanisms that neutrophils employ to attack and kill microbes later in this chapter.

The inflammatory response
Inflammation is the term given to the series of events that sur- round an immune response and display a number of characteristic features, including local swelling (edema), redness (due to capillary dilation), pain, and heat. These features are the collective consequence of the release of cytokines, chemokines, and vasoactive amines from macrophages and mast cells upon the initial encounter with a pathogen. Byproducts of complement activation (i.e., C3a and C5a), which will be discussed later, also contribute to the inflammatory response through promoting neutrophil chemotaxis, as well as activation of mast cells (Figure 1.13). All of these inflammatory mediators help to recruit neutrophils as well as plasma proteins to the site of infection by inducing vasodilation of the blood vessels close to the site of infection and by acting as chemotactic factors for neutrophils circulating in blood. The extra cells and fluid that gather at the site of an infection (which contribute to the swelling seen), the increased redness of skin tone in the area, and associated tenderness constitute the classic inflammatory reaction. 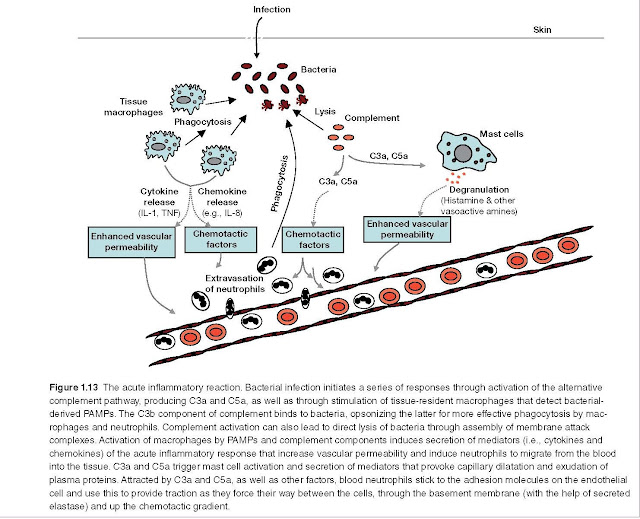 Mast cells collaborate with macrophages to promote vascular permeability
As we have already alluded to above, the macrophage plays a key role in the initiation of an inflammatory response through the secretion of cytokines and chemokines in response to engagement of its PRRs and through encounter with opsonized microbes (Figure 1.12). However, another innate immune cell, the mast cell, is instrumental in provoking increased permeability of blood vessels due to release of the contents of the numerous cytoplasmic granules that such cells possess (Figure 1.8). Mast cell granules contain, among other factors, copious amounts of the vasoactive amino acid histamine (Figure 1.14). Mast cell degranulation can be provoked by direct injury, in response to complement components (C3a and C5a), encounter with PAMPs and through binding of specific antigen to a class of antibody (IgE) that binds avidly to mast cells via surface receptors (we will discuss antibody classes at length in Chapter 3). Histamine provokes dilation of postcapillary venules, activates the local endothelium, and increases blood vessel permeability. Irritation of nerve endings is another consequence of histamine release and is responsible for the pain often associated with inflammation, an evolutionary adaptation that most likely encourages the host to protect the infected or injured area to minimize further damage. 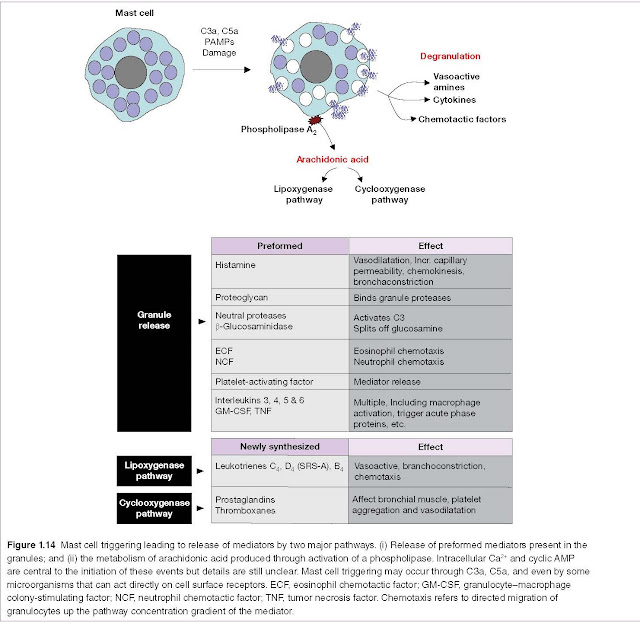 The relaxation induced in arteriolar walls causes increased blood flow and dilatation of the small vessels, whereas contraction of capillary endothelial cells allows exudation of plasma proteins. Under the influence of the chemotaxins, neutrophils slow down and the surface adhesion molecules they are stimulated to express cause them to marginate to the walls of the capillaries, where they pass through gaps between the endothelial cells (diapedesis) and move up the concentration gradient of chemotactic factors until they come face to face with complement‐opsonized microbes (the details of complement‐ mediated opsonization will be discussed a little later in this chapter). Adherence to the neutrophil complement (C3b) receptors then takes place, C3a and C5a (byproducts of complement activation which will be discussed later) at relatively high concentrations in the chemotactic gradient activate neutrophil killing mechanisms and, hey presto, the slaughter of the last act can begin!

Neutrophils are rapidly recruited to sites of infection
We have mentioned that the cytokines, chemokines, and vasoactive factors (such as histamine) that are released by activated macrophages and mast cells are instrumental in triggering neutrophil recruitment from the circulation into the site of infection, a process called extravasation (Figure 1.15). Because neutrophils are so numerous and so adept at phagocytosis, their recruitment to an inflammatory site is a critical step in innate immunity. So, let us take a look at this process in a little more detail. Normally, neutrophils circulate in the bloodstream and are prevented from adhering to blood vessel walls owing to the rapid rate of movement of the blood within the vessels. To exit the bloodstream, neutrophils must first lightly adhere to and roll along the vessel wall until they gain a firm foothold that allows them to come to a stop, whereupon they initiate the process of squeezing between the endothelium. The cytokines secreted by activated macrophages, especially TNFα and IL-1β, have particular roles in this regard, as the latter cytokines increase the adhesiveness of the endothelial cells lining the blood capilleries closest to the site of infection through triggering the exposure of P‐and E‐selectins on these cells. The selectins present on the activated endothelium permit neutrophils to initiate the stopping process and to start rolling along the endothelial wall through binding interactions with carbohydrate ligands (e.g., sialyl‐LewisX) present on the neutrophil cell surface (Figure 1.15). 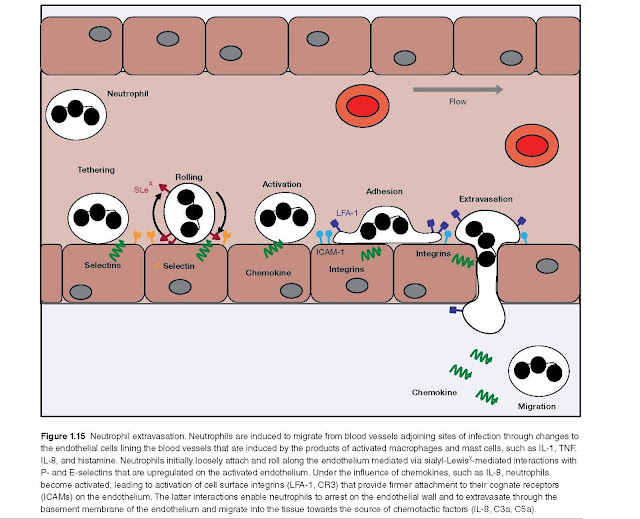 At this stage, the neutrophil will also experience the chemotactic factors, such as IL‐8 and complement products, that are emanating from the site of infection. These factors initiate the process of neutrophil activation, which triggers conformational changes in adhesion molecules called integrins (e.g., LFA‐1, CR3) on the neutrophil surface that permits stronger interactions with their cognate intercellular cell adhesion molecules (ICAMs) receptors on the activated endothelium that arrests the neutrophil. Finally, neutrophils squeeze between the slightly wider gaps in the activated endothelium than normal (due to the relaxation effects of histamine) and start to follow the gradient of chemotactic factors (IL‐8, complement factors C3a and C5a) to its source. As we have seen earlier (Figure 1.10), this process is very efficient indeed and results in huge increases in neutrophil numbers at the site of infection within a matter of hours.
A similar process is also used to recruit monocytes from the bloodstream to reinforce their macrophage counterparts within the tissues, but this wave of recruitment usually takes place 6–8 hours after the peak of neutrophil extravasation and under the influence of a different chemokine, monocyte chemotactic protein‐1 (MCP‐1). Indeed, one of the reasons for the recruitment of extra monocytes (which differentiate into macrophages upon entering the tissues) is to help remove all of the battle‐ weary neutrophils, many of which will be stuffed to the gills with microbes, as well as other debris from the tissue and to initiate the process of wound healing.