Normal Skin Flora
The skin contains normal microflora that are universally found on all humans. It has been estimated that the number of bacteria on the surface of the human skin is greater than the number of cells in the human body. The normal skin flora include the bacteria Staphylococcus epidermidis, Corynebacterium species, Propionobacterium acnes, Micrococcus species, and Acetobacter species. The demodex mites are the only parasites considered to be part of the normal flora. Pityrosporum species are the only fungi that are considered to be normal skin flora. The microbes that make up the normal skin flora under most circumstances do not cause any type of disease. They are able to reproduce and maintain viable populations, living in harmony with the host. In stark contrast, transient skin flora can sustain growth only in certain skin environments. Transient microbes are not able to produce long-lasting, viable reproductive populations and therefore are unable to maintain a permanent residence. Some examples of transient skin flora are Staphylococcus aureus, including methicillin-resistant S. aureus (MRSA), Enterobacter coli, Pseudomonas aeruginosa, Streptococcus pyogenes, and some Bacillus species. Normal and transient flora can become pathogenic under the correct environmental conditions.


Normal bacterial colonization begins immediately after birth. Once newborns are exposed to the external environment, they are quickly colonized with bacteria. S. epidermidis is often the first colonizing species, and it is the one most commonly cultured in neonates. 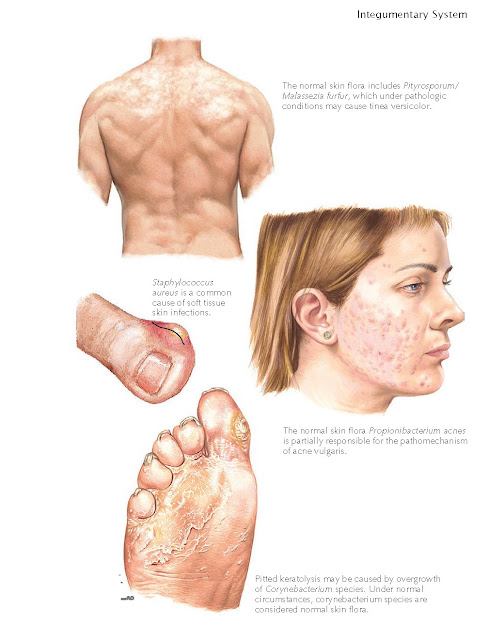 The innate ability of certain bacteria to colonize the human skin is dependent on a host of contributing factors. Availability of nutrients, pH, hydration, temperature, and ultraviolet radiation exposure all play a role in allowing certain bacteria to develop a synergistic balance. The normal skin flora use these factors to their survival advantage and live in a symbiotic relationship with the human skin. These microbes have evolved a competitive advantage over the transient skin flora.
Under certain circumstances, normal skin flora can become pathogenic and cause overt skin disease. Over- growth of Pityrosporum ovale (Malassezia furfur) causes tinea versicolor, an exceedingly common superficial fungal infection. Warm and humid environments are believed to be factors in the pathogenesis. Tinea versicolor manifests as fine, scaly patches with hyperpigmentation and hypopigmentation. Other Malassezia species have been implicated in causing neonatal cephalic pustulosis, pityrosporum folliculitis, and seborrheic dermatitis.

The common skin bacterium, S. epidermidis, is a grampositive coccus that can become a pathogenic microbe under certain circumstances. Conditions that increase the chance that this bacterium will cause pathogenic skin disease include use of immunosuppressive medications, immunocompromised state (e.g., human immunodeficiency virus infection), and presence of a chronic indwelling intravenous catheter. S. epidermidis creates a biofilm on indwelling catheters, which can lead to transient bacteremia and sepsis in immunocompromised patients and occasionally in the immunocompetent.
P. acnes is a gram-positive organism that is found within the pilosebaceous unit. These bacteria occur in high densities in the sebum-rich regions of the face, back, and chest. It is the major species implicated in the pathogenesis of acne vulgaris. In immunocompromised individuals, it has been reported to cause abscesses.
Corynebacterium species, when in an environment of moisture and warmth, can produce an overgrowth on the terminal hairs of the axilla and groin regions, resulting in the condition known as trichomycosis axillaris. Different colonies of this bacterium can produce superficial red, yellow, or black nodules along the terminal hair shafts. Corynebacteria can also cause pitted keratolysis, a superficial infection of the outer layers of the epidermis on the soles.
The only parasites that can be found normally on human skin are the demodex mites, which live in various regions of the pilosebaceous unit. Demodex brevis lives within the sebaceous gland ducts, whereas Demodex folliculorum lives in the hair follicle infundibulum. Demodex mites can cause demodex folliculitis. an infection of the hair follicles that manifests as superficial, follicle-based pustules.
The most important skin microbes, based on their ability to cause pathology, are the transient microbes. The best-known species is S. aureus. The ability of S. aureus to cause folliculitis, boils, abscesses, and bacterial sepsis is well documented and is a major cause of morbidity and mortality.