Vitamin D Metabolism
The skin plays a critical role in the production of vitamin D and thus in calcium and phosphate hemostasis. The epidermis turns provitamin D3 (7-dehydro-cholesterol) into vitamin D3 (cholecalciferol) through interaction with ultraviolet B (UVB) radiation. The keratinocytes within the epidermis contains enzymes that convert vitamin D3 into 25-hydroxyvitamin D3. The skin also can produce 1,25-dihydroxyvitamin D3, known as calcitriol. This biologically active metabolite is critical in calcium metabolism, bone metabolism, and neuromuscular transmission and most likely is an important player in the immune system regulation of ultraviolet-induced DNA damage. Vitamin D2 (ergocalciferol) and vitamin D3 are both absorbed by the gastrointestinal tract; they are often collectively referred to as vitamin D.


When skin is exposed to sunlight, it immediately begins production of vitamin D3. Ultraviolet radiation, predominantly UVB (290-320 nm), interacts with keratinocytes to convert provitamin D3 (which is also an important precursor in the production of cholesterol) into previtamin D3. Previtamin D3 is further converted into vitamin D3 via a spontaneous endothermic reaction. Vitamin D3 produced in the skin can act locally or be absorbed into the systemic circulation and added to the concentration of vitamin D3 absorbed by the gastrointestinal tract. An elevated level of vitamin D3 in the general circulation causes increased absorption of calcium and phosphate through the gastrointestinal tract, increased mobilization of calcium stores from bone tissue, and increased release of parathyroid hormone (PTH), which results in a lowering of the serum phosphate concentration. 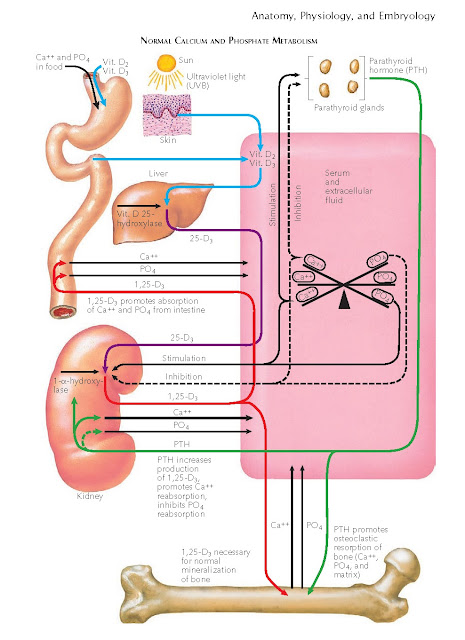 The earliest sign of vitamin D deficiency is an often subtle and transient decrease in the serum calcium level. This decrease causes the pituitary gland to secrete PTH, which acts on the kidneys to increase calcium reabsorption, decrease phosphate retention, and increase osteoclast activity. This increase in osteoclast activity also increases the serum calcium level. Vitamin D deficiency is manifested by normal serum calcium levels, increased PTH levels, and decreased phosphorous levels.
Vitamin D3 synthesis in the skin is dependent on contact with UVB radiation. Sunscreens, clothing, and glass all block UVB radiation and diminish the local production of vitamin D3 in the skin.
Immunologically, 1,25-vitamin D3 has been found to regulate the maturation of dendritic cells, monocytes, and T lymphocytes. Vitamin D and its analogues are believed to inhibit tumor cell proliferation and to cause apoptosis of tumor cells. Because the vitamin D receptor (VDR) forms heterodimers with the retinoid X receptor (RXR) and other retinoid receptors, the combination of vitamin D and vitamin A analogues may ultimately be found to be responsible for the immunological effects of both of these vitamins.

Rickets is a disease of childhood that is caused by severe vitamin D deficiency. It is rarely seen in the United States in the twenty-first century, but it is not uncommon in developing countries. Vitamin D deficiency in adults more commonly manifests as osteomalacia, which occurs throughout the world. The deficiency leads to decreased bone mineralization and can cause osteopenia and osteoporosis. The normal concentration of vitamin D in serum is believed to be between 35 and 200 nmol/L. 1,25-Vitamin D3 exerts its effect by binding with the VDR and then interacting with DNA to directly modulate the transcription of specific genes. The VDR is a member of the nuclear receptor family. 1,25- Vitamin D3 enters a cell, binds with VDR in the cytoplasm, and then enters the nucleus of the cell. There, the complex interacts with cellular DNA by binding to various regulatory sites. In this way, vitamin D3 and the VDR are able to modulate gene transcription. The VDR also forms heterodimers with other members of the nuclear receptor family, mainly the RXR. Most VDR signaling involves this heterodimer form.
Vitamin D is one of the fat-soluble vitamins. It is found in many foods, such as cod liver oil, many fish, egg yolks, and liver. More commonly, one encounters vitamin D as a supplement in many foods such as milk, breads, and cereals. Oral vitamin D supplements are easily obtained and well tolerated.