Skin Photobiology
On a daily basis, the skin interacts with some form of light. The most abundant and physiologically relevant portion of the light spectrum is the ultraviolet range (200-400 nm). The ozone layer essentially prevents all ultraviolet C rays (200-280 nm) from reaching the surface of the earth, limiting the physiologically relevant range to ultraviolet B (UVB; 280-320 nm) and ultraviolet A (UVA; 320-400 nm). UVB rays are 1000 times more potent than those of UVA. UVB rays are absorbed by the epidermis and are responsible for causing sunburns. It is believed that 300 nm is the most potent wavelength for causing DNA photoproducts. Erythema begins 2 to 6 hours after exposure to UVB light and peaks at approximately 10 hours after exposure.


The UVA spectrum can be subdivided into UVA II (320-340 nm) and UVA I (340-400 nm). UVA II rays are responsible for the immediate but transient pigmentation that is seen after exposure to ultraviolet light. It causes melanocytes to release preformed melanosomes, resulting in a mild increase in skin pigmentation that begins to fade within a day. UVA I rays are responsible for a longer-lasting but slightly delayed pigmentation. The effects of visible light on the skin are still being explored and defined. 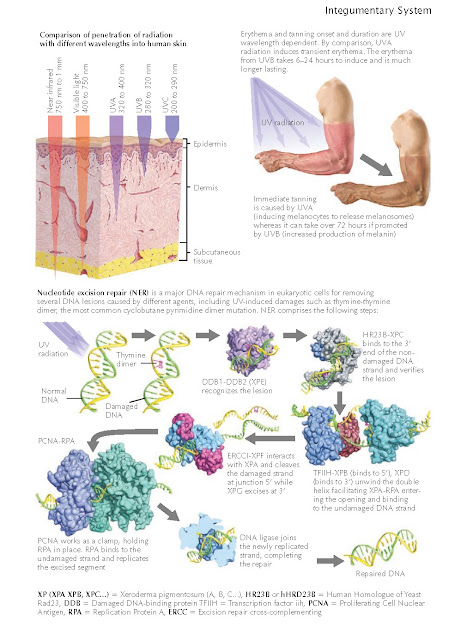 The sun produces vast amounts of ultraviolet light, but there are other sources of ultraviolet radiation produced by humans. A thorough history should take into account an individual’s occupations and exposures. Welders are commonly exposed to UVC and, if not properly protected, can develop severe skin and corneal burns.
Ultraviolet rays interact with skin in many ways. The most important interaction is between ultraviolet light (especially UVB) and the DNA of keratinocytes. Because UVB is limited in its depth of penetration into the epidermis, it affects only keratinocytes, melanocytes, and Langerhans cells. The photons of ultraviolet light interact with cellular DNA, inducing a number of specific and nonspecific effects. These interactions can result in DNA photoproducts, which are formed between adjacent pyrimidine nucleoside bases on one strand of DNA. The most common photoproducts are cyclobutane pyrimidine dimers and the pyrimidine pyrimidone 6,4 photoproduct. The common cyclobutane pyrimidine dimer mutation is highly specific for ultraviolet damage. These photoproducts cause a decrease in DNA replication, mutagenesis, and, ultimately, carcinogenesis.

The cell nucleus is well equipped to handle DNA damage caused by photoproducts. A series of DNA repair proteins are in constant surveillance. Once a photoproduct is found, the DNA repair mechanism is called into service. There are at least seven well- described proteins that help in recognition, removal of the damage, and repair of the DNA strand. These seven proteins were named XPA through XPG after studies of numerous patients with the photosensitivity disorder, xeroderma pigmentosum. Each is uniquely responsible for some part of the DNA repair mechanism. Defects in any of these XP proteins results in a differing phenotype of xeroderma pigmentosum. Patients with xeroderma pigmentosum are prone to develop multiple skin cancers at a young age.
Proteins within the cells are also susceptible to damage from ultraviolet light exposure. The amino acids histidine and cysteine are very susceptible to oxidation reactions after interaction with ultraviolet light. Melanin pigment also absorbs ultraviolet light, and this is one of the means by which the skin defends itself against ultraviolet assault. Absorption of ultraviolet light by cell membranes, organelles, RNA, and other components of the living cell can cause oxidative stress and cellular damage.
When exposed to ultraviolet radiation, the skin increases production of melanin, which in turn helps in photo protection. Many organic and inorganic compounds have been used as sunscreens to help neutralize the effects of ultraviolet radiation on skin. The main protective mechanisms are absorption, reflection, and physical blockade.